About three years ago, Mark DeMichaelis, president of State Garden and third-generation produce processor/distributor, had a talk with his father that would spin the nature of their family business on its head. At the end of the talk, State Garden had a new direction: create a foundation that would focus on distributing healthy food to the Northeast marketplace and to support charities that promoted children’s health. DeMichaelis and his family pursued the initiative with zeal, and Olivia’s Organics was born.

Today, Olivia’s Organics relies on growers from Maine to California to provide the fresh salad greens that it sells. The company processes, washes, packs and ships its products in New England, and services the Northeast corridor and parts of Canada.

Helping kids one salad at a time 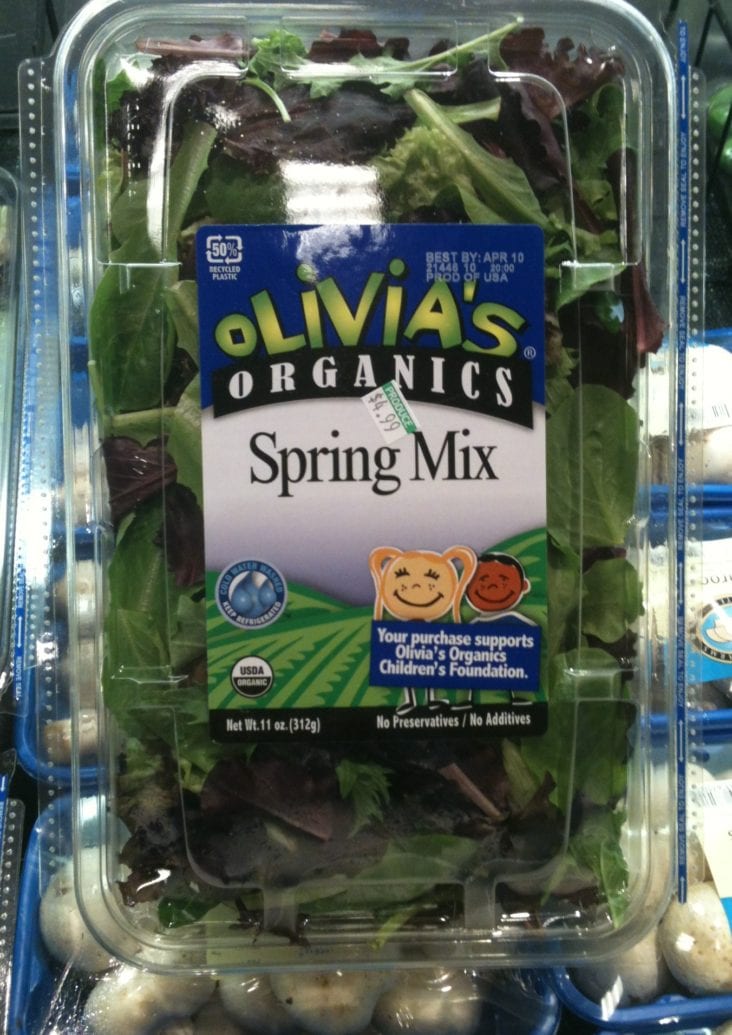 “They are wonderful to us,” says Paul Colligan, programs director at The Greater Boston Food Bank. “They donate enough salad greens for all the kids in our program to eat salad every night.” As part of their mission, Olivia’s Organics created this opportunity by approaching The Food Bank directly and offering to donate organic salad mix.

“It’s been a tremendous donation; it really helps my budget,” gushes Colligan, who is pleased to see kids in the neediest neighborhood eating organic salad on a nightly basis. Olivia’s Organics also donates other products for The Food Bank’s food pantries, and Colligan says the foundation is also doing tie-ins with the Urban Learning project, which allows kids from Boys & Girls clubs to work at farms in the city. “They’re very good to the community,” he says.

“The type of feeling that we’re trying to spread with our Olivia’s Foundation is one of camaraderie and generosity,” says DeMichaelis. “This industry is full of very, very generous, concerned people, and it’s really what made it fun, is to know that you belong to a community.”

Toward that end, Olivia’s Foundation supports numerous other community organizations and projects. Among other things, Olivia’s has helped teens learn to grow produce through The Food Project; made a five-year commitment to send a child to Camp Joslin, a summer camp in Massachusetts for boys with diabetes; and equipped a children’s playroom at the pediatric bone marrow transplant unit at the Floating Hospital for Children at Tufts-New England Medical Center.

While some produce distributors shy away from organics, claiming it’s a niche market, DeMichaelis doesn’t see it that way. He sees a high demand for organics in the Boston marketplace, and says Olivia’s Organics is meeting that demand. He wonders how anyone can say organic is a niche product when conventional retailers are devoting an increasing amount of shelf space to it and even touting their own lines. “It’s in the mainstream and I don’t think anyone can deny that anymore.”

State Garden entered the organic salad business in 2000 when the company acquired NorEast Fresh. At that time, the DeMichaelis family believed the trend and the growth sector over a five-year horizon would be organic. Almost a decade later, DeMichaelis would like to move State Garden into all organic, but says the market will dictate how quickly and how efficiently that will happen. He cites limitations on the amount of available organic acreage and limitations on price points as factors that slow the process. “You have to be sensitive to the customer who cannot afford,” he says.

The market may not be ready to support the transition of State Garden to 100 percent organic produce, but DeMichaelis intends for Olivia’s to remain exclusively organic, and says State Garden will not market anything conventional under the Olivia’s label. He has spent almost three years focusing on developing organic products, innovating and looking for new organic items.

DeMichaelis is committed to organic food on a personal level, as well as a business level. “We feel organics are better for the environment. I grew up in a town that was rocked by companies that were putting bad things in the ground. It’s better for the earth and for the consumers in the long run,” he explains.

DeMichaelis believes that things often come full circle in this world. When his grandfather started State Garden in 1938, the Boston Terminal market (where State Garden and other distributors currently operate) was developed so local growers had an outlet to sell their products. The infrastructure is still the same 60 years later, but produce packagers and distributors routinely import produce from across the country and around the world, even though such produce is often available locally.

DeMichaelis expects that as “locally grown” programs grow and increase in popularity, companies that currently import produce will play a major role in assisting local growers in bringing their products to the market. “If you see where we were and look at where we’re going, in my opinion it will come full circle,” he says. “My grandfather started by selling locally grown celery. All of a sudden, after watching the price of fuel and the other issues facing our world, there is a big push for locally grown.”

Whenever possible, Olivia’s sources its salad greens from local growers. However, in New England, few growers produce enough organic salad greens in the winter months to meet demand. Olivia’s currently does not source any organic produce from greenhouses. Jim Bullock, director of quality assurance at Olivia’s Organics, says the company is experimenting with greenhouse growing in Massachusetts.

Bullock says that most of the suppliers either pack their own labels or supply other processors in addition to Olivia’s. He believes most of them have been growing organically since the ’80s and ’90s, before the advent of packaged organic salads. Some are individual growers, growers with partners or farmers that are growing both conventionally and organically. One of Olivia’s suppliers is Pure Pacific Organics, a division of Pacific International Marketing. The California-based company works with farmers throughout California, Arizona and Mexico on USDA-certified organic land.

Bullock claims that many of their growers have been farming organically since before any programs existed to certify their methods, and boasts that some of their growers exhibit a level of commitment to organic growing that’s beyond the norm. “I know one grower on a ranch that’s fairly new that did 17 passes of additions to the soil to build up the soil organically before he even dropped the seed.”