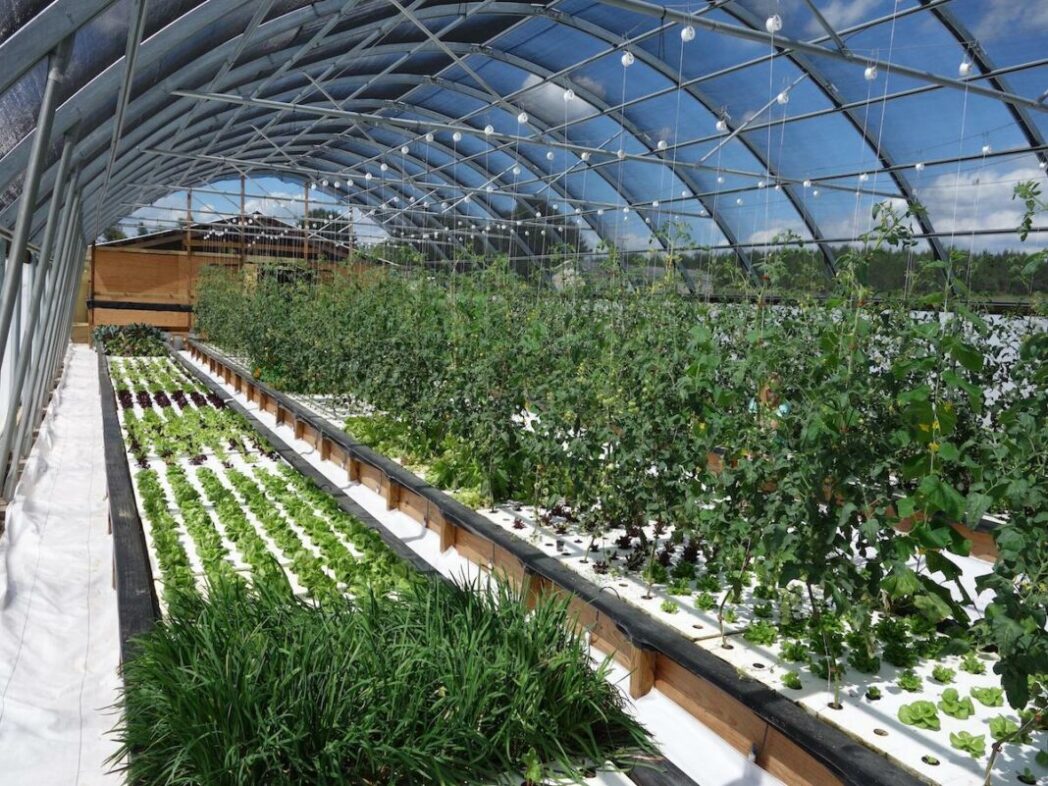 Many farmers who are looking for ways to produce food in a more efficient and sustainable way turn to aquaponic farming. An aquaponic farm is a self-sufficient system that allows farmers to produce more food with less resources. Farmers in areas with poor soil or rocky environments that are prone to drought can especially benefit from setting up an aquaponic farm.

What is an aquaponic farm?

Aquaponic farming is a type of hydroponic farming where plants are grown in nutrient-rich water from a fish tank instead of being grown in soil. It combines fish and – occasionally – other aquatic animals such as snails, prawns, and crayfish, with crops in a symbiotic system. Fish produce nutrient-rich waste that boosts plant growth. On the other hand, plants filter waste materials that are toxic to fish in high concentrations out of the system and use them for their own sustenance. While fish farming is frequently harmful to the environment, not all fish farms are the same. These are unique in that they mix fish farming and hydroponics to create what has the potential to be a more sustainable system in which each component benefits the whole.

What are the benefits of an aquaponic farm?

An aquaponic farm doesn’t need weed killers or pesticides, both of which are harmful to our bodies. Everything used to maintain this farm is natural, including the fertilizers required to maintain the health of the farm. As a result, the food that comes from this farm is more healthy and safer to consume than food from a traditional farm.

Growing crops in water allows farmers more control over the temperature of the environment their crops grow in. Given that farmers can control the ambient temperature, it’s easy to keep growing crops even in the coldest of climates. For this reason, the winter won’t interfere with the yield of an aquaponic farm the way it normally would.

Since the water is constantly recycled and reused between the fish and the plants, this kind of farm needs less fresh water than most other farms. This reduced need for water lowers the costs of running the farm.

An aquaponic farmer can sell both fish and vegetable produce, thus multiplying their income. Since the costs of running this farm are lower than the costs of running a traditional farm, it’s easier to make profit. However, it will take some time to set up the system and start growing food, so expect some initial costs.

Plants that are exposed to nutrient-rich water 24 hours a day grow faster thanks to the environment they’re growing in. As a result of this accelerated growth, an aquaponic farm produces more crops than the average farm.

In an effort to survive economic instability and rising food prices, many people are adopting lifestyles that allow them to live off the land. An aquaponic farm is a great solution for this, as it creates a self-sustaining environment and is a reliable source of food.

Some farmers are now taking it a step further and combining AI systems with their farms. When done right, this combination results in a powerhouse of a farm.

How do companies boost farming?

Farmers can use different technologies for precision agriculture, which allows them to monitor crop moisture, soil composition, and temperature in growing areas. This allows them to boost yields by learning how to care for their crops and calculating the optimal amount of water or fertilizer to use.

This has given rise to apps that give farmers advice on water management, crop rotation, timely harvesting, optimal planting, and pest attacks. Thanks to these technologies, we can now forecast meteorological conditions, control nutrition, and assess crop sustainability using machine learning algorithms and photos obtained by satellites and drones.

Precision farming is a method of increasing crop yields by utilizing data inputs in precise amounts. Farmers can acquire a tailored plan for their farms using software. They can then meet the needs of our current and future worlds using IoT and other goodies, such as greater food production and profitability, without depleting our natural resources.

Soil is one of the most significant components of the health and development of a plant. The soil’s nutrition determines the quality of the crop. As a result of deforestation, soil quality deteriorates with time, making it difficult for farmers to determine which soil is ideal for which crop.

Furthermore, by allowing humans to grow food in urban places, this technology may reduce deforestation. One Israeli tech startup that uses these algorithms to produce perfect light and water conditions to grow crops in a container small enough to be housed inside a home. The technology could prove especially useful in Latin American and Caribbean countries, where most of the population lives in cities. Furthermore, growing food in pre-existing metropolitan areas means that humanity may become less reliant on deforestation to meet their food needs.

Additionally, farmers can use help in identifying and protecting carbon sinks or forest regions that absorb carbon dioxide from the atmosphere. If these trees are not cleared, more carbon dioxide will be released into the sky. Furthermore, artificial intelligence is being created to detect and target weeds in a field with the proper quantity of herbicide, removing the need for farmers to disperse chemicals across entire fields and contaminate the environment.

This kind of tracking tech has been put to other use as well. The technology may track how energy-efficient buildings are and keep an eye on urban heat islands. Urban heat islands are formed when heat is absorbed by urban building materials such as concrete and asphalt, leading cities to become hotter than their surroundings. For this reason, people rely more heavily on air conditioning throughout the day to stay cool, resulting in increased greenhouse gas emissions from the energy consumed. Providing information on the locations of these islands could assist legislators in deciding what policies to implement to minimize emissions and encourage more efficient and environmentally-conscious city planning.

Over the years, pollution levels have risen dramatically, and climatic conditions have become increasingly unpredictable. Farmers have found it challenging to decide the best time to sow seeds due to climate change and this is where aquaponic farms come into play, in combination with the necessary technology. It is simple to acquire knowledge into how weather, seasonal sunlight, wind speed, and rain will affect agricultural planting cycles using artificial intelligence. Farmers will be able to examine and plan when to plant their seeds using weather predictions.

As mentioned previously, crop yield can be improved using real-time sensor data and visual analytics data from drones. Drones can provide real-time video surveillance and analysis of agricultural growth patterns. According to aquaponics.ai, smart sensors are another part of the equipment that can provide information on moisture, fertilizer, and natural nutrient levels. Additionally, drones are viable for obtaining data on how various fertilizers, irrigation patterns, and pesticide treatments improve crop yields.

Along with drones, companies using artificial intelligence are developing robots that can perform a variety of farming tasks. These robots will be taught to manage the spread of weeds and to collect crops. They’ll also be taught how to pick and bag crops. Rather than relying fully on humans for labor, the goal is to automate such manual operations and complete them at a considerably faster rate with more significant volumes.