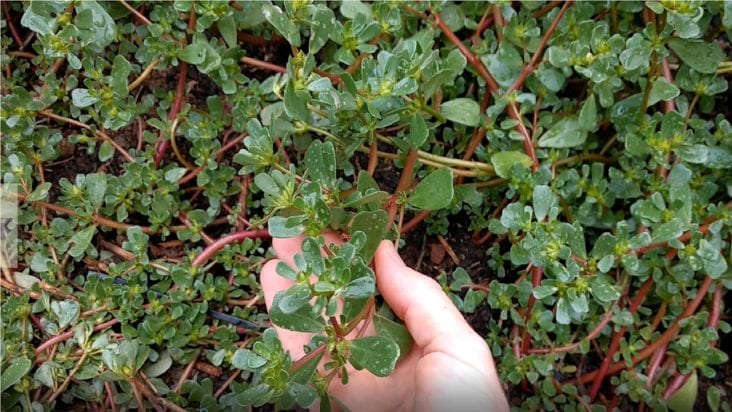 This is a succulent and leafy vegetable, very rich in omega-3s and melatonin. It is also said to be one of Mahatma Gandhi’s favorite foods. In the USA however, it is widely considered a weed. It is high time to put this highly nutritious plant on the plates instead of compost piles.

Purslane (Portulaca oleracea) has other names like miner’s lettuce, pigweed and hogweed. It grows wild and covers the ground throughout North America. The leaves and stems are bland or tart, and have a taste similar to a slightly peppered cucumber. The leaves are tear-shaped and can either be ultra-thin and tender, or broad and fibrous. The plant is harvested in midsummer when the smooth, green or red stems are delicate and slender. When growing season ends, the stems are thick, tough and stringy, and should be discarded. The vegetable does great in most home gardens, and is widely available in farmers’, and ethnic markets and restaurants.

The leaves of the plant are high in alpha-linolenic acid, which is an omega-3 fatty acid present in fish or flaxseed. Furthermore, it contains small amounts of EPA and DHA, longer-chain omega-3s almost exclusively found in fish and fish oil. Omega-3s nourish the brain cells and can decrease the risk of depression, hyperactivity, migraines and Alzheimer’s disease. In addition, they support the immune system and prevent inflammation. They could also prevent some types of cancer, lower cholesterol and help regulate blood pressure and clotting. They do well in treating type 2 diabetes and heart diseases. Purslane plant is rich in calcium, iron, potassium, glutathione, essential amino acids, and vitamins C, E, and A.

To make a flavorful salad, put some raw purslane with other lettuces like arugula, butter lettuce, spinach, romaine and mache. Add some of your favorite lightly sweet and tart dressing like honey mustard.

You can also enhance the ordinary mayonnaise-based salads like chicken, egg, tuna, shrimp and turkey salads. Simply replace celery with chopped purslane sprigs and stems and you are set.

Use it in sandwiches instead of lettuce.

Raw purslane is an attractive garnish to try.

Also, try it instead of watercress in recipes.

Feel free to stir it into soups and stews, like spinach.

When cooking it, steam it for around two minutes, or sauté it in a hot pan with olive oil until It becomes lightly wilted. Then serve it as a side dish.

Refrigerate your purslane in an open plastic bag with a paper towel at the bottom. By doing this, you will keep it for about a week.

Before eating it, cut off the roots. Soak the leaves and stems in cold water to remove dirt, and then dry it. Cut off and throw away any heavy stems.

Because of the variable tastes, always sample the plant before you use it in recipes. Younger and smaller leaves are sweeter and more delicate, while matured and larger stems can sometimes be too strong.

Put the potatoes in a large pot of water and boil. Cook for 10 minutes, until they are soft, and then drain.

Combine potatoes, purslane, onion and peppers in a large mixing bowl. In another smaller bowl, combine mustard, honey and vinegar, and then add to the salad and mix well.