Grass root-biting beetle larvae are a stubbornly recurring problem for many gardeners. Fighting them is not easy, but there are several ways to reduce their population.

Q: I have a lawn of 1.5 an on the plot. I established it by bringing peat soil over sandy soil. Two years later, a lot of hollow spots appeared on the surface of the lawn (atrophy, drying out of the grass), which was caused by cockchafer larvae biting the grassroots.

For more information and gardening tips visit this website.

Digging up the lawn, I dug up a great many beetle larvae. The following year, I fertilized acidic soil (pH=6.0-6.5) and re-established the lawn, properly tending and fertilizing it. Again I found larvae, while in the summer, however, grassless patches appeared on the lawn again. I’m afraid that the same thing will happen to me again this year.

What can I do to avoid beetles laying eggs on the ground on my lawn in the future? How to destroy the larvae?

A: Due to the hidden lifestyle of the beetles, fighting them is quite difficult. Adult beetle larvae emerge from the ground in spring, in April/May, and proceed to feed on the leaves. This period, known as swarming, lasts about six weeks. Fertilized females bury themselves in the ground at a depth of about 20 cm and lay eggs in deposits. Egg development takes 6 weeks.

Hatching tiny sprouts initially live in the top humus layer and feed on decaying plant parts. In the second and third years, the sprouts feed singly on plant roots. The fourth year is the year of pupation. As early as August, adult beetles emerge from pupae and remain in the soil until spring.

Fight by chemical and biological methods 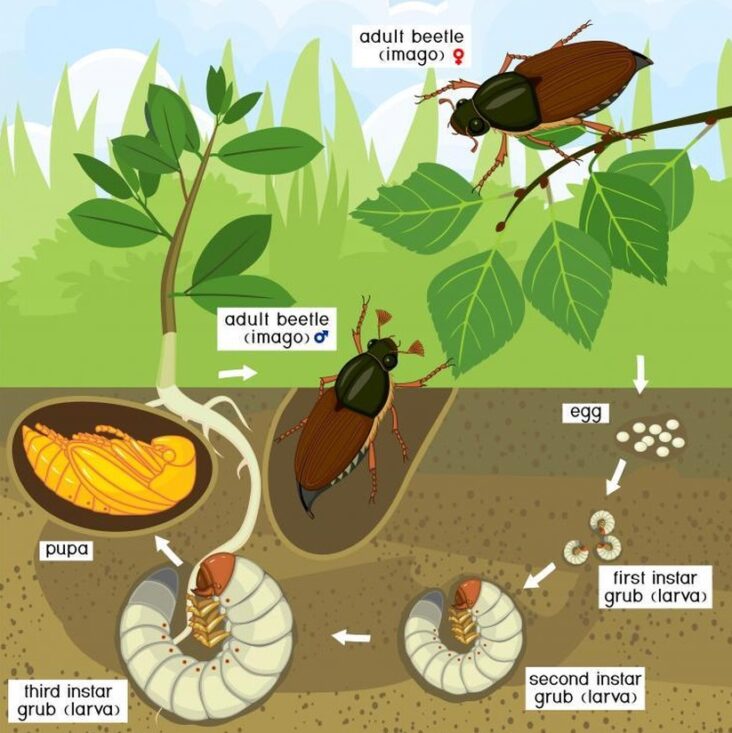 The chemical method of controlling spider mites involves the application of soil insecticides before sowing or planting crops. The higher of the specified doses is used against older larvae. The preparations are applied in spring and autumn. When planting trees, pour some of the preparation into the bottom of the holes, and mix it with the soil used to bury the roots.

There is also a biological preparation against shoots containing parasitic nematodes. In the fight against spider mites, some methods to prevent their mass occurrence are helpful. The soil (regardless of origin) that you want to apply in the garden should be carefully sifted before spreading, and the pests (including wireworms) weeded out of it.

Birds, moles, shrews, or runners are natural enemies of wireworms. Try to build hiding places for our allies in the form of branches or dry, healthy leaves gathered in one place. After the temperature drops at night, the beetles are numb, and then in the morning, it is quite easy to shake them from low trees.

Stains on the lawn

Yellow patches, patches of dead stalks, can be noticed on the lawn, but they do not harm only lawns, but also nurseries of young trees and shrubs – their voraciousness causes the shoots and branches of young trees to wither. Sprouts in root vegetables bite holes and destroy seedlings in seedbeds. Sprouts in the soil feed for as long as three years – only after this time does they pupate into adult beetles, ready for further reproduction.

Clear damage to the lawn appears in summer and early autumn. The presence of spider mites is easily mistaken for symptoms of soil nutrient deficiencies. If despite fertilization, you still see a problem – this is a sign that these pests are likely to have appeared in the garden. You can also perform a simple test – pull lightly on the blades of grass, located within the yellow-brown spots. If the turf easily comes away from the ground, and you find white “worms” underneath, you can be sure that this is the work of voracious larvae. Note: Similar damage is caused by nematodes, but these are so small that we will not notice them with the naked eye.

Sprouts feeding in the lawn are white, thick, and slightly curved. Their heads are brown and their bodies end in a black abdomen, reaching a length of 3-4 cm. The pests most often appear in gardens on sandy soils, former meadows, or animal pastures. The larvae appear where moles, their natural enemies, are absent. Therefore, it is not always worth getting rid of these animals from the garden.

How to get rid of lawn sprouts?

The control of the beetles is most easily carried out in summer when they are mostly about 10-20 cm deep underground.

It should be noted at the outset that the control of May beetles and their larvae is difficult and requires regularity. Proper lawn care is very important, and above all mowing. Do not allow cut grass to dry on the turf – it should be combed out every time. It is also worth using scarification and aeration treatments. These actions, as well as digging up the soil on warm, dry, and sunny days brings insect eggs and larvae to the surface: we can collect and destroy them ourselves, leave them to dry, and die in the sun or as food for birds. Let’s not frighten birds from the lawns, such as starlings, titmice, flycatchers, chaffinches, wagtails, and nuthatches – they will help us in the fight against pests! Interestingly, some of them, such as the titmouse, can eat as many insects and larvae within her as she weighs themselves!

To reduce the number of spider mites feeding in the grass, it is advisable to put a black film on the turf overnight. Such treatment will cause the larvae to come to the surface, and the next day they can be raked and discarded.

Near plants that are particularly vulnerable to destruction by pests, it is worth growing species that these insects are not fond of onions, garlic, and mustard.

Let’s also fight weeds, and especially prize, especially loved by the larvae of the May beetle.

From natural, however, with more decisive measures to combat spider mites, you can use preparations containing bacteria that hinder the development of soil pests – to be bought in any garden store. Their action can be supported by buckwheat fertilizer.

Sheets are laid under the trees, on which the shoot beetles fall from the branches. Also, tillage operations, which consist of breaking up the surface layer of the soil, cause the layer to dry out, contributing to the mass extinction of the young spider beetles. Treatments should be carried out on dry and sunny days.

With an already established lawn, first, check whether watering it with preparation will be a sufficiently effective treatment. If not, unfortunately, the lawn must be eliminated, the soil sifted, mixed with the above-mentioned preparations and the lawn reestablished. Insecticidal preparations have a rather long withdrawal period, so the cut grass will not be fed to animals, but it can be composted.