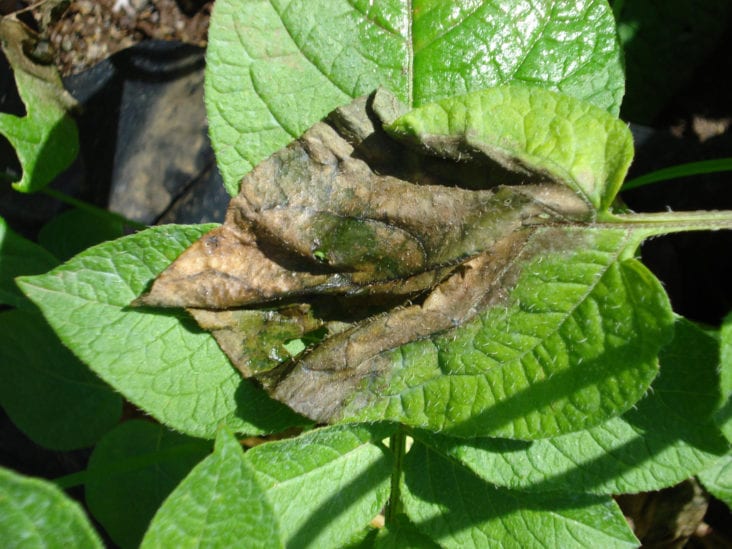 It isn’t only the late blight of tomatoes and potatoes, caused by the oomycete Phytophthora infestans, that causes major crop loss each season. Although P. infestans, and the resulting late blight disease it causes, get all of the attention, numerous other Phytophthora species are responsible for blight diseases, too. Not only do Phytophthora organisms affect produce crops, but trees, shrubs and weeds can all serve as hosts, too.

Phytophthora capsici is primarily responsible for causing blight in peppers and cucurbits, and only recently has been found to affect some bean species, too. Although P. capsici can cause disease in tomatoes and eggplant, along with a dozen other plant species, it is those Cucurbita and peppers that take the brunt of this blight’s devastation. 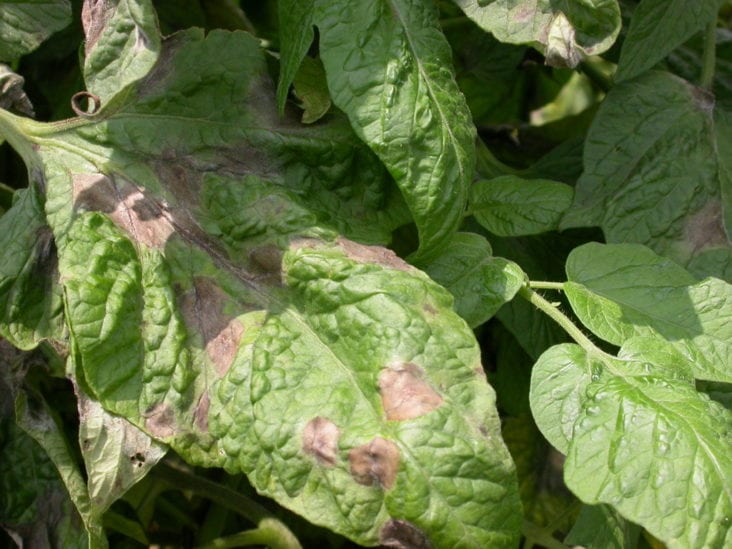 Oomycetes are not true fungi. When the soil is water-logged, these organisms thrive. This soil-borne pathogen spreads rapidly through wet soil, with its reproductive spores traveling via water to reach plant tissue. Although change to dry conditions can halt its progress, infected plants can be rapidly killed, depending on initial point of infection, virulency of the P. capsici strain, and plant growth stage.

Oomycetes can reproduce both sexually, via oospores, and asexually via sporangia. The sporangia are the main form of reproduction under drier conditions. This reproduction occurs in a controlled manner, and the chances of disease spread to crops remain slim. Oospores, too, can germinate and will produce more sporangia under normal crop-growing conditions, but any infection occurring as a result is slow to develop, and a limited amount of impact is felt as long as conditions remain relatively dry. But watch out when it gets wet.

“At the moisture level suitable for crop growth, oospores of Phytophthora capsici can germinate and produce sporangia,” but there would be limited damage,” Dr. Babadoost said. “But in wet conditions, particularly when there is free water, each sporangium produces several zoospores that can swim and reach the host plant. Also, oospores, sporangia and zoospores can be carried by running water over a distance.”

Heavy rainfall, or excessive irrigation, is needed for the disease to become prevalent. Water-soaked soil allows the pathogen to enter the plant, as oospores, zoospores and sporangia move through the water. Symptoms of infection appear as water-soaked lesions.

Once in the plant host, the oomycete begins reproducing via formation of sporangia, which are released from these lesions and spread via water splash from plant to plant. As the sporangia make contact with the any part of the plant, it causes infection. Oospores, produced in the plant, are released into the soil upon plant death, and can remain there for many years, waiting for the wet conditions needed to begin their cycle again.

Phytophthora capsici can infect a plant at any growth stage. Symptoms can vary, ranging from damping off of seedlings to crown and root rot, vine blight, leaf spots and fruit rot. Often, mature plants first exhibit crown rot – dark brown stems beginning at the soil line, with girdling and rapid death, as the organism moves through the water-saturated soil to infect the plant at the stem base. Infected seedlings will dampen off, wilting rapidly.

Infection also can also occur via leaves, which become chlorotic, then necrotic. If wet conditions persist, the leaf spots will join together. Should dry conditions prevail, this progression will stop. Vine lesions in Cucurbita girdle the stems and cause plant collapse above the area.

Fruit also can also be directly infected, either from contact with the soil or via water splashing. Fruit can develop blight any time from fruit set to post-harvest. Fruit rot appears as a water-soaked lesion, which is soon covered with white mold. Infected fruit decomposes rapidly.

If a plant is infected prior to fruit set, there may be no fruit production. Fruit from a plant infected close to harvest may be marketable, depending on the degree of disease infection and the prevalent weather conditions.

“Asymptomatic fruits from a field with vine or fruit infection should be carefully handled and kept dry for a while for possible symptom expression,” Dr. Babadoost said. “One very important point is if you touch an infected fruit at harvest, and then pick up an asymptomatic fruit, very likely you will transfer the pathogen from infected fruit to healthy fruit.”

Excluding the organism from non-infected fields is the best prevention, although this can be difficult. Because P. capsici moves rapidly through water, can live in the soil and remains on infected plant material, it is easily transmitted from place to place. Even irrigation water can be contaminated, if runoff from infected areas makes its way into a pond, or into irrigation equipment. Rain splash and runoff can cause the disease to spread from field to field as well.

Seed treatment is very effective for preventing cucurbit seedling death. It retains its effectiveness for about five weeks after seeding, Dr. Babadoost said, noting that the cost is negligible, although the loss could be devastating. When transplanting peppers, immediately treat them with fungicides if there is any history of the disease in the field. There are no resistant Cucurbit cultivars, but some very good resistant pepper cultivars do exist, he said.

If symptoms of infection occur in a field, fungicides should be used immediately. First symptoms will normally occur in low-lying field areas. Some P. capsici populations have shown resistance to various fungicides.

Planting susceptible crops in raised beds to improve drainage and combat the moisture-laden soils conducive to the spread of the pathogen is recommended. A rotation of at least three years between susceptible crops is warranted, but may not be adequate for pathogen elimination. Avoid planting in poorly drained, low-lying areas. Immediately remove infected plants from crop fields.

The use of mulch and cover crops can help to keep the disease from spreading. A brassica cover crop can keep oospores from germination. Mulches, particularly straw or rye vetch, can protect plants by preventing water from splashing up from the soil.

Different local populations for P. capsici have differing levels of virulency. Although the disease has caused major crop losses throughout the world, and recently began causing severe problems in certain regions of the United States, some infections may not be as virulent. Growers should rely on local Extension agents and researchers for information on disease characteristics in their area.