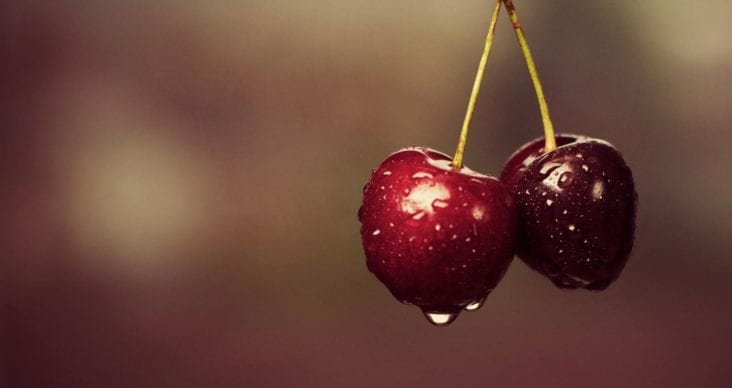 On the average, there are 7,000 cherries on each cherry tree; 250 cherries make one pie; each tree makes 28 pies. If the average U.S. consumer eats 1 pound annually, this adds up to approximately 260 million pounds annually. Americans demand cherries —and growers are filling those expectations.

Often referred to as America’s Super Fruit, cherries are rising in popularity due to the recent focus on health-promoting properties of antioxidants. Instead of relying on fruits from foreign markets, health and nutrition experts advise consumers to look for American-grown fruit. An alternative to exotic berries grown and marketed in a foreign rainforest, the cherry packs a lot of nutrition. Plus, it’s available year-round as dried, canned, frozen and in juice.

Another reason for its popularity is that February is American Heart Month and also National Cherry Month. Could the simple cherry one day be the cure for diseases that affect the body? Scientists suggest that this fruit may offer powerful heart-health benefits that provide answers to the mysteries of illness.

With greater emphasis on the health and nutritional benefits of cherries, it’s not surprising that growers are planting more trees and cherry production has increased.

Michigan is the top cherry-producing state with 70 to 75 percent of the tart cherries grown in the United States, and expects to harvest about 164.5 million pounds in 2017. According to the report, Michigan growers are assessing damage from an early May freeze but still expect an average crop.

Meanwhile in California, Oregon and Washington, growers are expecting good sweet cherry crops in 2017 following several seasons of California droughts and a moderate spring with warm temperatures in the Pacific North West.

To be successful in cherry production, growers must be knowledgeable in a variety of areas. Although cherry trees grow well in most zones, tart cherries produce best in zones four though nine, and sweet cherries thrive best in zones five through nine. The somewhat sweet bush cherries are hardy enough to grow in zone three.

Self-pollinating cultivars and dwarf rootstocks of both tart and sweet cherries have been made available to growers from modern plant breeders. Check with your county extension program or the agricultural agent in your area for those trees that self-pollinate. Select healthy, disease-resistant trees cultivated for your growing zone.

A healthy standard-size cherry tree starts producing fruit in its fourth year (30 to 50 quarts). A dwarf-sized tree is expected to produce fruit its third year (10 to 15 quarts).

Like other fruit trees, cherry trees thrive planted in a sunny site with good air circulation and average to rich, well-drained soil. A soil pH of between 6.0 and 6.8 (slightly acidic) has proved best. When planting, avoid low-lying areas where frost and standing water collect. Also avoid planting where cherries, peaches or plums have been previously grown as diseases may still be present in the soil.

For zones four through six, plant in the early spring or fall. As purchased cherry trees are grafted on a rootstock, this will determine the plant’s growth and the depth for planting. Nursery growers recommend the following space for planting: 20 to 30 feet in every direction for a standard-sized sweet cherry tree; 8 to 12 feet for dwarf trees; 15 to 20 feet apart for tart cherry trees. Add mulch, such as pine needles or shredded bark, around the base, leaving 4 to 5 inches of space next to the trunk.

Fruit trees require care and maintenance to be top producers. Like apple trees, cherry trees should be trained with one main trunk with a number of side branches. A modified leader structure (such as recommended for peach trees, having an open center with evenly spaced side branches) is suggested for tart cherry trees. Pruning takes place in late winter when the tree is in a dormant state. In spring, fertilize each tree until the fruit sets and after the fruit is harvested. Another maintenance responsibility is to check for common disease and insects each spring and fall.

Harvesting methods depend on whether the cherries are tart or sweet. In Michigan, both tart and sweet cherries ripen in July, with the peak season usually the third week of the month. Mechanically harvested, tart cherries are gathered with a shaker to drop the fruit onto canvases where they are dropped in tanks of water. Sweet cherries that are sent to market as fresh fruit are picked by hand.

Avoid damage to the spur (the point where the stem is attached to the tree) by leaving the stems on the cherries. Select dark red, black or yellow fruit as the sugar content rises in the last few days of ripening. Refrigerating at slightly cooler (31 to 32 degrees) temperatures keeps the fruit marketable for about three weeks. 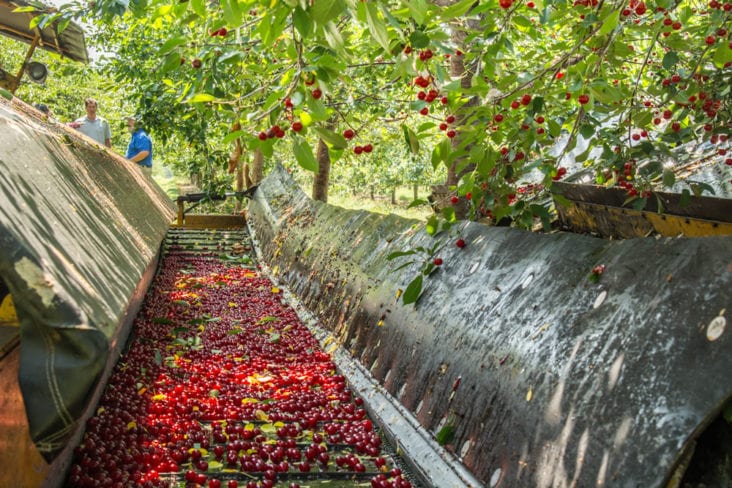 A standard for sweet cherries. A new cold-hardy selection from Canada, it ripens late July to early August. Fruit is firm, very flavorful and resists cracking in rainy weather. The tree is relatively small, is self-pollinating and an excellent pollinator for other sweet cherry varieties. Zones five through eight.

The canner’s choice. Huge crops of rosy-checked golden cherries maintain a sweet flavor during processing. Ripens in June and is seldom bothered by birds. Any cherry other than Bing can be used as a pollinator. Zones five through eight.

Noted for its gourmet flavor. Its rose-blush color does not attract birds like red cherries. Large yields ripen in mid-to-late June. Hardy in bud and wood. Use Royal Ann to pollinate. Zones five through eight.

A longtime favorite and found most often in grocery stores. Firm, meaty fruit has distinctively rich flavor and deep crimson color. Bears record crops, ripens in June and July. Must have a pollinator. Black Tartarian is suggested. Zones five through eight.

Can produce up to 48 quarts per tree during a season. The dark red fruit ripens in June and may be the first fruit of the summer for early markets. Very flavorful. Pollinate with Stella or Bing. Zones five through eight.

Other varieties of sweet cherries include Emperor Francis, Napoleon and Schmidt.

The most well known tart cherry is the Montmorency. Seldom sold fresh, they are shipped to processing plants and on to companies that produce pies, preserves, jellies, juice and other products. These companies rely on the frozen or canned products throughout the year to meet inventory demands.

An outstanding introduction from Cornell University’s renowned fruit breeding program. Surefire is an outstanding producer for pies, cobblers and preserves. The naturally small trees have a pyramidal form, making them easy to prune and maintain. Self-pollinating. Zones four through eight.

The most well-known pie cherry, it has become the standard by which tart cherries are judged. Ripens in July, the bright red fruit has amber flesh and clear juice. Self-pollinating. Zones four through eight.

Bush-type cherries are becoming popular with growers, as they are easy to harvest.

An easy-to-pick shrub variety. Loaded with purplish-black fruit in July. Grows 4 to 5 feet tall and bears at an early age. Self-pollinating. Zones three through eight.

With consumers demanding a wide variety of cherry products and the fresh market crop available, the cherry industry expects the potential for profit to expand as long as growers plant smart.

Editor’s note: This article was written by Carolyn R. Tomlin. It was originally published January 2010 and has been updated for accuracy.