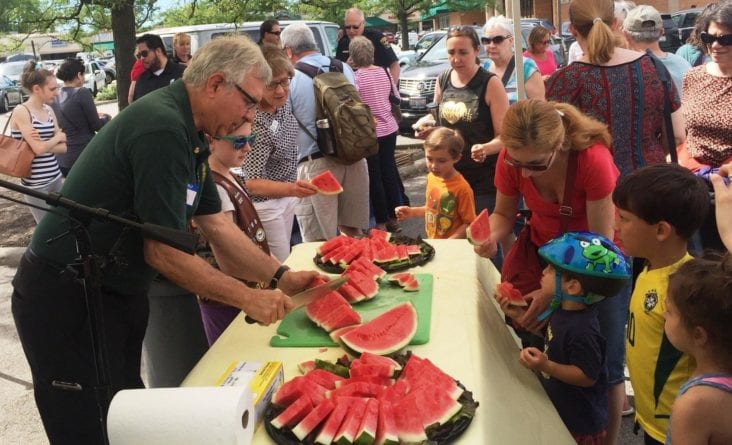 Summer picnics, barbecues, parties and pool days all have one thing in common: watermelon.

This crop, which is 92 percent water, is a great moneymaker if all phases of watermelon production are done correctly. In 2014, according to the U.S. Department of Agriculture, over 120,000 acres of watermelon were grown in the United States. Those acres produced close to 3.5 billion pounds of watermelon, which, at an average of $0.35 per pound, turns an everyday food into a $1.2 billion industry that translates to $4,300 per acre on average, according to the Agricultural Marketing Resource Center. – Watermelon Market

To get a fresh slice of this market, proper growing techniques and maintenance are key. Possibly one of the most important components of getting a good watermelon harvest is to grow the crop in the proper soil and climate conditions. The University of Florida stated that a growing temperature of 70 to 85 degrees Fahrenheit is ideal. For most producers in watermelon areas, this temperature is reasonable since the normal harvesting window is from May to July. If temperature is not a problem, soil is the next big factor in proper growth.

According to Oklahoma State University (OSU), watermelons will grow best in sandy loam soils that are a bit more acidic. During the growing season, the soil will be ideal for proper growth when soil pH is in the 6.1 to 6.8 range. Adding lime to the soil can help achieve this desired pH level if it is lower than desirable. If a crop is planted in heavier soils with a lower pH, according to OSU, plants develop slowly and fruit size and quality are usually inferior.

Once a field with the correct soil type is identified, watermelon must be protected from Mother Nature. Windbreaks are advisable on sandy soils to reduce “sand blast” damage and stunting of young seedlings caused by spring winds, according to OSU. Wind also may cause plants grown on plastic mulch to spin, which can damage the crown of the plant.

Using fertilizer well before seeds go into the ground will provide a solid nutritional bed for watermelons. Add ample moisture and it is possible to reduce these negative effects. Once a producer has provided the proper soil and environment to grow watermelons, it is time to plant. 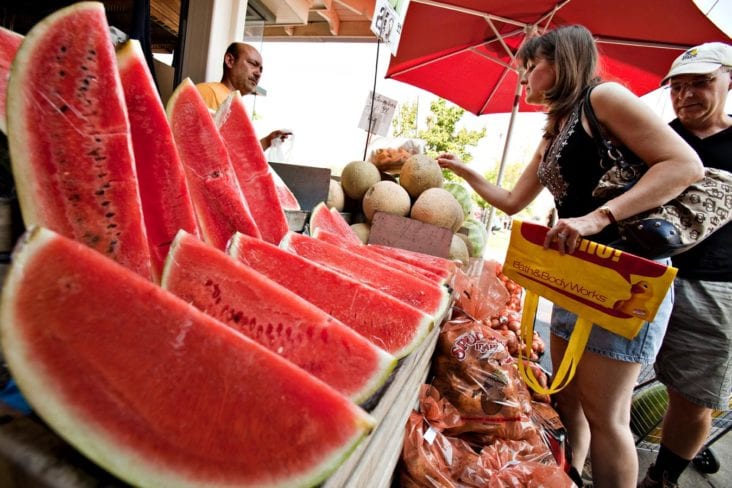 When planting time arrives, OSU suggested that growers plant open-pollinated varieties using 1 to 2 pounds of seed per acre and place seeds at a depth of a 1/2 to 1 1/2 inches. Plant deeper in sandy or dry soils.

Hybrid varieties have seed costs about 20 to 30 times greater than open-pollinated varieties. Therefore, reduced seeding rates of hybrid varieties are used to reduce costs. Establishment of a full stand will likely be fine with improved genetics of hybrids.

Some planters and planter plates can be modified to plant single seeds at desired in-row plant spacing. With this technique, 1 pound of seed can plant several acres with the possibility of achieving an acceptable stand.

Row spacing generally varies from 6 to 18 feet. High yields are reported for spacing as close as 9 to 18 square feet per plant but average melon size will decrease as plant spacing decreases.

Growers should adjust plant spacing to obtain the best size, quality and quantity of melons for their market. Some growers seed in twin rows 36 inches apart. This allows young plants to vine together and provides additional protection from wind damage.

Be sure to plant seeds far enough away from each other to allow for maximum growth. A good rule of thumb is that the less room the watermelon should grow, the less it will grow – and the potential profit will be sliced.

Early planting is a viable option in regions with short summers. If done correctly, this can be quite successful. For early production, OSU stated that watermelons can successfully be transplanted in bare soil or transplanted or seeded through plastic mulch.

Watermelons are difficult to transplant, so seedlings must be grown in suitable containers such as peat pots, peat pellets or in trays to be successfully transplanted.

“It is critical that seeds be germinated with proper moisture, temperature and light and that plants do not get too large before transplanting. For transplant and plastic mulch use to be economical, a premium price must be obtained for the earlier production,” OSU ag economists said.

Although the transplanting option is more expensive, it is the only viable option for growing watermelon in climates that do not enjoy the blazing summers of other prime regions of the country.

During a long, hot growing season, a watermelon crop will need what all other living organisms need: water.

Proper irrigation can make the difference between a successful and unsuccessful year. OSU recommends producers assure the crop gets 8 to 10 inches of timely rainfall or irrigation.

Growers with limited irrigation capability can often increase yields with only one or two irrigations.

Critical periods, when moisture stress is most harmful, are before seedling emergence, at early bloom and during fruit sizing. Inadequate moisture at planting will result in poor and uneven emergence. Moisture shortage at bloom results in poor fruit set and misshapen fruit. Moisture stress during fruit development reduces melon size and results in rapid vine decline.

When irrigating, apply 1 to 2 inches of water per session. Avoid irrigating in the late afternoon or at night to reduce foliage diseases.

Do not operate a sprinkler system between 7 a.m. and 11 a.m. during the flowering and fruit-setting period. It may interfere with pollination activities of bees.

It is important to limit irrigation as the melons approach maturity, because excessive moisture at this time can cause a white heart, lower sugar content and fruit bursting. Even with the correct soil, pH, temperature and irrigation, pests and diseases attacking watermelon are almost inevitable.

Bacterial fruit blotch is one disease many growers face. Although not overly common, it is devastating to the watermelon.

According to Texas A&M University plant pathologists, the symptoms of bacterial fruit blotch start as watersoaked spots that rapidly enlarge. Symptoms are generally seen in the light portions of striped fruit. Lesions later turn brown and crack. The pathogen is introduced to a field by planting contaminated seed or transplants.

Within the field, the bacteria spread to healthy plants via rain or overhead irrigation, especially under conditions of high humidity and temperature. Fruit is most susceptible to infection around the time of pollination. As the fruit matures, it becomes more resistant to bacterial blotch.

Once introduced into a field, the bacteria can persist on volunteer watermelon or citron plants, or in their seed. Cantaloupe and honeydew melons are also susceptible to this pathogen.

If bacterial fruit blotch is identified in a particular field, watermelon should not be planted in that field for at least another year. Copper fungicides can be used on the plants during flowering to help prevent this disease.

Another disease to watch for is belly rot. If belly rot attacks the watermelon, the fruit decays at the area in contact with soil. The rot begins as a small water-soaked area that quickly spreads. In many cases, the area will be surrounded by a profuse growth of white mycelium. One fungal species associated with belly rot is Pythium aphanidermatum, which rapidly colonizes the fruit.

Another pest of concern is the southern blight fungus, Sclerotium rolfsii, which produces seed-like resting structures. The disease is most severe during periods of rainfall and high temperature, when the soil remains wet for long periods of time, according to plant pathologists at Texas A&M.

Also watch out for wilt. This disease can harm an entire field of watermelon if not recognized quickly and if appropriate action is not taken to stop the spread. According to USDA, wilt causes affected vines to wilt suddenly. Those vines do not recover. Usually one branch after another wilts, beginning at the tip, and dries up until the whole vine is dead. This may occur at almost any time during the growing season but is most noticeable when the fruit is setting. Cut the stem and the woody portion will be found discolored.

Under a microscope, the browned wilted areas, which are water-carrying vessels, would be seen to be plugged with slender, colorless mold filaments, the watermelon wilt fungus.

Knowing why wilt is present in a field can help prevent future problems. USDA researchers believe one of the causes of wilt to be a fungus, which attacks only watermelons. It lives in the soil, enters the small roots and grows up through the water vessels, which it plugs to such an extent as to cause the vine to wilt.

After the death of the vine, the fungus grows out of the stem at the surface of the ground and forms multitudes of spores – minute seed bodies, which spread it very widely.

Few soil diseases spread as rapidly as the watermelon wilt or remain longer in infested soil. It is carried by drainage water, on the feet of livestock, in stable manure and in other ways. To get rid of wilt, rotate crops and do not allow stable manure to be spread in watermelon fields. Both techniques are proven methods to reduce the likelihood of wilt.

If proper planting techniques are used, irrigation practices are correct and disease does not ravish the plants, then five to six weeks after pollination the watermelon crop should be ready to harvest.

OSU noted that during harvesting, “Melons should be cut from the vine rather than pulled, twisted or broken off to reduce chances of stem decay.”

Leave a long stem on the fruit to avoid bruising melons and handle carefully at all times. Never stand melons on end to prevent bruising and flesh separation from the rind. Do not place melons with bottom sides turned up, because the ground spot is easily sun scalded.

Haul melons from the field in straw or paper-padded vehicles to reduce bruising, punctures and rind abrasion. To help prevent bruising, do not allow field hands to ride on top of the load. After harvest, load melons directly into trucks for shipment to market or haul them to a central grading station for unloading and shipment.

Melons are usually graded and sized during the loading operation. Traditionally, melons have been bulk hauled in trucks.

Use of pallet-sized containers has gained popularity because they are more efficient in unloading and fruit damage related to rough handling during loading and unloading is reduced.

Bulk bins made of corrugated fiberboard holding around 1,000 pounds as well as cartons holding three to five melons are used.

Once harvested and shipped, watermelons will remain in good condition for up to three weeks if stored at a temperature near 58 degrees Fahrenheit. This is great if the watermelons are going to a big-name supermarket where they might not be purchased the same day as delivery as they would be at a fruit stand or farmers market.

Smiles on the consumers’ faces make a fitting end to a successful watermelon season – one where the right soil type, proper pH, effective irrigation and solid disease control measures combine to produce a great watermelon crop.