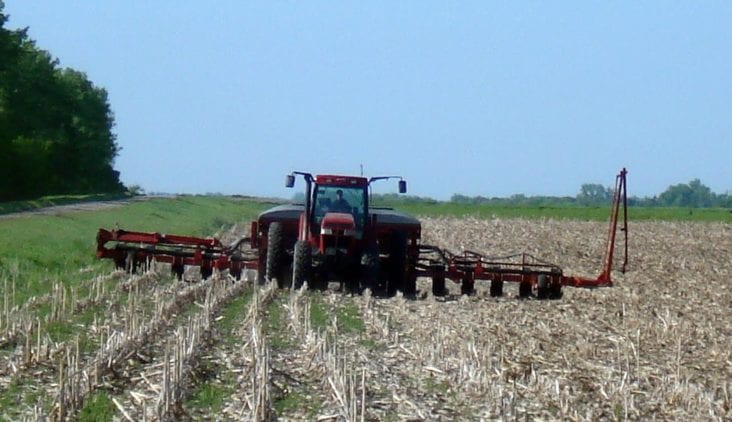 Last month’s column focused on the efficacy of no-till farming as a method for boosting production while lowering CO2 in the atmosphere. If conventional no-till can be effective, can organic no-till be even more effective in lowering atmospheric carbon dioxide? Can yields achieved with organic no-till agriculture match yields achieved with conventional no-till? Organic No-till vs. Conventional No-till

Like so many experiments, the early days of research of organic no-till farming, or cover crop-based organic rotational reduced tillage (CCRRT), were fraught with challenges. On http://eXtension.org, Mark Schonbeck of Virginia Biological Farming reported that results were inconsistent, and weed control and vegetable yields sometimes fell short of then-current standards. Schonbeck found that planting vegetables through mulch could delay vegetable growth and maturity and promote problems with slugs, cutworms and crop diseases. The randomly oriented cover crop residues left by mowers, scythes and other manual cutting tools interfered with mechanical no-till transplanting. Most standard vegetable planters and transplanters do not function well in untilled soil.

In recent years, CCRRT has gained positive momentum. U.S. researchers report that organic no-till is feasible for vegetable growers. The fact that CCRRT is also beneficial for the climate is a boon for growers and eaters worldwide.

The same inputs that reduce the need for synthetic nitrogen fertilizer also pull more carbon from the air and put it back into the soil where it belongs (a process called carbon sequestration). “We don’t have any other greenhouse gas data yet,” Kathleen Delate of Iowa State University said, “but by putting more carbon in the ground, you can help mitigate GHG (greenhouse gas) emissions.”

Is CCRRT feasible for your farm?

By protecting soil from erosion while increasing water infiltration and soil moisture-holding capacity, CCRRT tackles flooding and drought, enabling the ability to weather at least one symptom of climate change. “This past year we observed greater water infiltration in rolled-crimped cereal rye compared to soil without mulch. This can help the soil absorb water during intensive rainfall events, which have increased over the past 50 years,” Cornell University’s Matt Ryan said. “We observed greater soil moisture late in the summer during a short-term drought period in organic no-till plots compared to plots managed using traditional organic methods. This means crops will have access to more stored water if conditions become dry.”

“Organic no-till is still in its infancy and the best results have been with annual crops that have large seed sizes, such as soybean and corn,” Ryan said. CCRRT is fairly scale-neutral and can be practiced on large farms.

More work is needed to determine how CCRRT might best be implemented on vegetable operations. At Virginia Tech, Ron Morse did research on organic no-till vegetable production. Experiments seeding pumpkins into cereal rye produced high-quality pumpkins, because the fruit was not sitting on bare soil.

At University of Wisconsin, results of research with vegetables varied. Silva found CCRRT works best for transplanted vegetables, and she stressed the importance of delivering adequate fertility to the vegetable crops at the appropriate time. Specialized transplant equipment may be needed. “In some cases, mulch helps with fruit quality and suppresses pathogen spread; in other cases, it may exacerbate it,” Silva said. “Strip till may be a more feasible approach, with the no-till phases being limited to the alley ways; this may lead to easier management of the vegetable crop, including the use of other weed suppressive mulches.”

Experiments with corn-soybean-wheat rotations show organic farmers can reduce on-farm fuel use and labor by approximately 25 to 33 percent when transitioning from tillage-based organic crop production to CCRRT production. There is currently no data for reduction in fuel use and labor in organic no-till vegetable operations.

Differences between no-till and organic no-till

Inputs: Conventional no-till relies on the use of synthetic herbicides to manage weeds and nitrogen fertilizer to boost yields. The critical input in organic no-till is the cover crop, which creates a thick mulch that suppresses weeds during the cash crop production season. As this is the primary input, management of the cover crop is essential. All cover crop management should focus on creating the amount of cover crop biomass required for reliable weed suppression: around 8,000 to 10,000 pounds of dry matter of cover crop per acre. Instead of nitrogen fertilizer, legume cover crops provide nitrogen for crops planted using the CCRRT method.

Many styles of roller-crimpers exist. Silva reported good results with the Rodale-designed model. Front mounting the roller crimper on a three-point hitch and planting in a one-pass operation offers consistent termination of the cover crop and fuel and labor savings. “Emerging [cash crop] seedlings must be able to penetrate through the mulch, which lends itself to larger seeded crops with more stored energy,” she said.

Methodology and timing: Planting later in the spring allows cover crops in an organic no-till system to reach the reproductive growth stage, so they can be effectively terminated without herbicides. Delate found the conventional practice called “continuous no-till” impractical in dealing with perennial weeds that can build up. “We have gone to tilling every third year of the rotation. You will still get the benefits of organic no-till every season you don’t till,” Delate said.

Direct seeding, or drilling directly into the dead cover crop or stubble of the previous crop, can be done for organic no-till but is more typical for conventional, since growers often plant on 30-inch rows and don’t use a drill. Delate and her colleagues are experimenting with this this year.

To see a return on your investment, your economic success will depend on many factors. If you already have no-till planting equipment, the only additional cost is for a roller crimper, which can cost approximately $3,500 for a 10-foot unit (http://www.croproller.com). Returns will depend on the weather each year, but should be greater than returns from traditional management practices in dryland farming in years with too much or not enough rain.

Which system offers the best solution for mitigating global climate change? Delate, Ryan, Silva and others seem to agree CCRRT is the winner. This production method sequesters more carbon and emits fewer greenhouse gases, but Delate said it is a complicated system that may not work every year. “We are still tweaking the system,” she said.