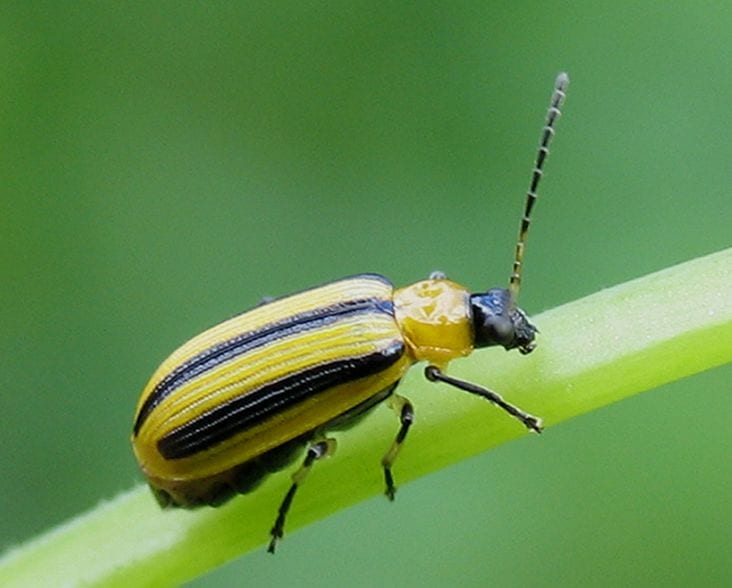 On warm spring days in many parts of the country, two species of cucumber beetles lurk near vegetable fields or feast on an available crop until their favorite meal, a cucurbit, emerges.

Adult beetles overwinter in protected areas near buildings, fences, and woodlots. They rapidly find host plants. In more northern areas, the striped cucumber beetle overwinters better than the spotted cucumber beetle, which often arrives from more southern areas. Both must be controlled early.

Cucumber beetles prefer certain species of cucurbits and even favor particular varieties within their preferred species. The concentration of cucurbitacin appears to be the chief attractant.

Both striped and spotted cucumber beetles can devastate young plants. Adults of either sex feed on foliage, pollen, and flowers, as well as fruit and fruit handles. The females lay eggs in soil cracks, and the resultant larvae feed on roots and stems. Small seedlings are especially susceptible; they can be eaten back to the soil line and may die even with less extreme feeding, especially if they have not yet grown four or five true leaves. Mature cucurbits can handle some defoliation without a yield loss.

However, these beetles do much more damage than simply feeding. They transmit Erwinia tracheiphila, which causes bacterial wilt. Cucumbers are the most vulnerable; watermelons are not susceptible. The bacterium overwinters in the gut of cucumber beetles.

In his research, Dr. Gerald Brust, IPM vegetable specialist with the University of Maryland, found that the bacteria move into an open wound in the plant from the beetles’ feces. When the beetles are in a mating and feeding frenzy, or when many beetles feed on a small plant or on a single leaf of a large plant, sufficient amounts of bacteria cause bacterial wilt.

Brust also notes, “I have found beetles feeding quite extensively at the base of small, medium and large plants, where they are protected from most sprays and are rarely seen by growers who are looking for them on the foliage.”

Wounds from those feeding beetles offer a pathway for bacteria to invade the plant’s stems.

There is no cure for bacterial wilt and no saving an infected plant. The bacteria spread throughout the plant’s vascular system and block the xylem vessels. The gums and resins exuded restrict water and nutrients, which triggers wilting. This can take several days or several weeks. Fruit from a wilting plant will likely be unmarketable.

A grower can detect bacterial wilt by cutting a stem and examining the cut ends for a sticky, viscous, slimy, stringy sap. This is more easily observed by pushing the cut ends together and slowly pulling them apart. Another method is placing the cut stem in a glass of water; in about 10 minutes, the milky strands of bacterial wilt will be present.

An infected plant must be destroyed because the infection can be spread to healthy plants by the cucumber beetles.

Since bacterial wilt is so troublesome, and because immature plants are more susceptible to cucumber beetle feeding injury, early control is imperative.

Cucumber beetles also transmit watermelon mosaic virus by feeding and regurgitating their virus-containing digestive juices. Here, too, some species are more vulnerable – pumpkins are among those susceptible.

An array of controls for cucumber beetles is available. Since susceptibility to feeding damage, varietal tolerance, and pesticide registrations vary among localities as well as regions, growers should contact their local extension office for the latest recommendations. Dr. Ricardo Bessin, University of Kentucky Cooperative Extension Service entomologist and IPM coordinator, notes that pesticide labels are changing to reflect the need to protect honeybees and other pollinators. “There is now a higher level of management,” he observes.

Control measures include management tactics developed for organic production and IPM programs. In addition, techniques to avoid the development of pesticide resistance or to limit the use of harsher chemical treatments are being employed. Therefore, many recommendations can apply to both organic and conventional production methods.

Most of these measures start with scouting. Many entomologists and vegetable specialists recommend scouting at least twice weekly early in the season or when plants are young. Cornell University’s 2013 organic production guide for cucumbers and squash for the Northeast and Mid-Atlantic recommends examining five plants at each of five sites in the field, looking at the undersides of cotyledons, young leaves, and stems. The field edges should be inspected carefully, and if plants are heavily damaged or reveal more than five beetles per plant, apply an insecticide within 24 hours. After the initial scouting inspection, Cornell suggests treating if the average number of beetles is one per plant.

Ben Phillips, Michigan State University Extension educator, reports the threshold for treatment as one beetle per plant for cantaloupe and cucumber, two for squash, and five for pumpkins and watermelon. He says, “Cucumber beetles are flighty. The best time to spray is after they settle down in the morning and evening.” He cautions growers to avoid treating when the flowers are open for bee pollination.

Trap crops along field perimeters divert beetles and their subsequent insecticide controls away from the desirable main crop. Phillips recommends using an attractive cucurbit trap crop. He says that blue Hubbard squash and buttercup squash have worked well. Trap crops should be planted one to two weeks earlier than the main crop and completely encircle it. Phillips also notes that trap crops can minimize chemical costs and adverse effects on pollinators and natural enemies.

Agricultural Research Service researchers in Oklahoma and Texas have successfully protected melon crops by edging the fields with squash since cucumber beetles prefer squash over melons.

Row covers can raise costs with large acreages. They afford protection from cucumber beetles and other pests, especially for young plants, but blossoms need to be pollinated for fruit production. One of Bessin’s graduate students became quite proficient at getting bees inside the covers at the precise time the flowers opened in the morning.

In some situations, delaying planting until the peak cucumber beetle influx is past may be economically desirable. However, keep in mind that without controls, the second generation of cucumber beetles will likely present problems.

University IPM sources are helpful in learning about and combating cucumber beetles. The sources mentioned here are easily accessible and give more information on which cultivars of cantaloupes, cucumbers, melons, pumpkins, summer and winter squash, and watermelon are most vulnerable.