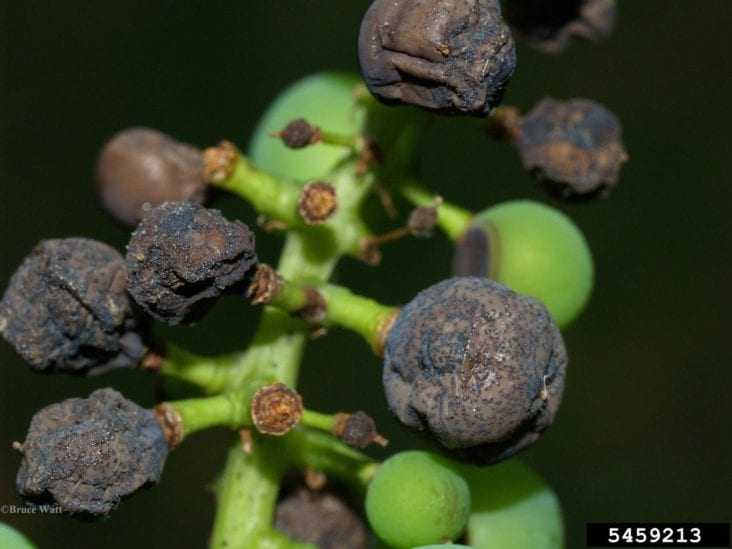 Black rot is a bacterial disease that only infects cruciferous crops. It also goes by many other equally unappealing names – such as stem rot, stump rot or black stem. Though the name you know it by may vary, the cause is always the same: bacteria called xanthomonas campestris pv. campestris. – Black Rot Disease

To make things more confusing, black rot fungus is a commercially important fungus of grapes. Apples, pears and hardwood trees also can be infected by this fungus, Botryosphaeria obtusa. But in vegetables, black rot refers to the bacterial disease. It’s a significant disease of cabbage and causes losses of cruciferous crops worldwide.

Leaf symptoms are somewhat similar to those caused by other organisms, as well as by abiotic causes such as drought stress or over-watering. The signature black veins seen in black rot can resemble fusarium yellows, which cause brown veining.

Typically in black rot, a yellow, V-shaped area occurs on the outer leaf margins and extends inward. The lesion will expand, dry out and turn brown. Leaf veins in the area appear black. As the infection worsens, older leaves may develop black spots and fall off.

Cutting into the stems of infected plants reveals that the vascular system is impacted, as evidenced by the black discoloration found there. The bacteria produce xanthan, which clogs the xylem and prevents nutrient flow.

Black rot renders leafy cruciferous greens unmarketable. No one wants to eat greens with off-colored spots, or holey or wilted areas, instead of green, crisp leaves. Root crops in the cruciferous family include radishes and rutabaga. Although these greens often don’t show leaf symptoms of black rot disease, the symptoms can appear as blackened vascular tissues, making the plant inedible.

Black rot infections can also render broccoli, cabbage, Brussel sprouts and cauliflower unmarketable, once the disease spreads via veins and into the main stem. In plants with lesser degrees of infection, some of the crop may be marketable, so removing infected leaves as soon as possible can help to slow damage. Black rot infection can readily become more prominent in storage. Black rot is often followed by bacterial soft rot, impacting market yields further.

Because the disease is readily spread via seed, on the exterior of seeds or via internal infection, primary control is utilizing clean seeds. Seeds soaked in water heated to 122 degrees Fahrenheit for 15 to 30 minutes can render the disease inactive and can be done on-farm or pretreated seeds can be purchased. Transplants should come from certified disease-free sources.

If seeds are infected, symptoms don’t always appear in the seedbed and may not be noticed until transplant. Only a minute percentage of seeds need to be infected for widespread disease outbreaks to occur. Seedlings that show symptoms of black rot may have black margins on the cotyledons, which may fall off. They may also show one-sided, stunted growth. Although most will die soon after showing visible signs, infected seedlings are a main source of the disease.

Greenhouses, planting flats, benches and tools should be disinfected, as the bacteria can survive in soil and plant debris. Cruciferous weeds can also harbor infections, so careful attention to weed pressures in and surrounding growing areas is important. Incorporating crop residues immediately after harvest can help decrease bacteria survival.

Black rot bacteria, if not present in the seed, often enters the plant via the hydathode, on the leaf margin. Injuries to the leaf surface are additional points of entry for the bacteria. Infections can be spread via water, soil, insects or equipment. The bacteria thrive in warm, wet conditions. Avoid entering fields under wet conditions and space plants at intervals that permit rapid drying. Overhead irrigation is not recommended.

Areas of the field with shade, poor air flow or poor drainage may show more signs of infection. Bacteria can also enter the plant from the roots, particularly under wet soil conditions.

Rotation of cruciferous crops with those in other families, for a minimum of three years, is needed to prevent recurrence from contaminated soils. Runoff water from cruciferous fields can cause infection to spread, too. Fields exposed to this runoff should not be used for cruciferous vegetable production.

Depending on the crop, some black rot resistant cultivars are on the market. Copper sprays can be used and can slow the disease, but are not completely effective and may offer little control, particularly when the disease is rampant or conditions favor its spread and are not effective in wet conditions.

Plants infected late in the season may be marketable and these crops may show little yield loss; those infected early in their life cycles, or grown in fields with extreme disease outbreaks, can have significant yield reductions. Keeping black rot from infecting plants for as long as possible may be the goal in conditions where disease pressures are high.