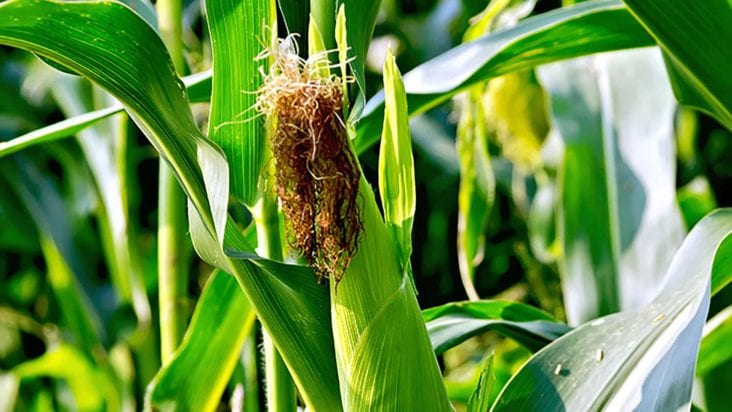 Whether you grow for wholesale or retail, producing full, tasty ears with no worms is the gold star of sweet corn production. Getting those ears of sweet corn production to your customers before the sugars turn to starch is the required next step. Doing so depends on getting a few things right from sowing to selling. – Sweet Corn

Mike Roegge, a small farms and local food systems educator, recently retired from University of Illinois Extension and grows sweet corn on his 20-acre Mill Creek Farm in Quincy, Illinois. The sweet corn is sold at the farm stand and in a few local grocery stores.

The key to sweet corn sales is never running out, once you start picking and no matter the market. If you are a large wholesale grower, distributors are going to need a constant, consistent supply throughout your growing season without any interruptions or shortages. Direct-market growers are going to lose customers if quality sweet corn isn’t available daily. “Especially for retail producers… once consumers find out you have corn, it needs to be there every day,” Roegge said.

Roegge said that one of the hardest things to do is to time your planting correctly, so maturity dates ensure a continual harvest. Some growers may opt to plant corn all at once, selecting cultivars with a variety of maturity dates, so harvest extends all season. Planting in succession, using one or two varieties and planting them at staggered, regular intervals can also be a means of supplying corn all season long.

For most growers, however, planting different varieties in succession, considering typical growing conditions, disease and insect pressures and maturity dates is the method that allows for the harvest of optimal quality sweet corn, continually, all season long.

When your total reaches the days of maturity for the variety selected, you’ve found your planting date. Sweet corn varieties have maturity dates ranging from about 65 to 85 days, or 100 to 120 total days needed, including time to germinate and emerge, Roegge said.

Sweet corn – a genetic mutation of field corn – has come a long way since its early days, back in colonial times. Unlike field corn, sweet corn is harvested before the kernels are fully mature. While color does not impact flavor, the genotype of sweet corn – normal sugary (su); sugary enhanced (se); supersweet (sh2) – as known as shruken; synergistic; or augmented – all of which are available in white, yellow or bi-color varieties, does. Hybridization resulted in the first supersweet corn back in 1953, Illini Xtra Sweet. While each type of sweet corn has differing amounts of sugar in the endosperm, supersweet varieties also have a gene that converts that sugar into starch more slowly

This means that sweet corn growers are selecting for a lot of traits. Along with size of the plant, size and shape of the ears, tightness of the kernels, amount of suckering, tolerance to cold soils, maturity dates, lodging resistance, husk tightness, yield and flavor, growers need to consider sugar amounts and sugar conversion.

“Your market is going to determine that type of corn you grow, as well as the color of that corn,” Roegge said. While white and yellow corn of the same variety will have the same taste properties, people tend to “taste with their eyes,” so color preferences exist.

Sweet corn with the su trait only has kernels that contain 5 to 10 percent sugar, by weight, in the endosperm. Sugary enhanced corn has double the sugar of su corn varieties, while super sweets or shrunken types have anywhere from 40 to 100 percent more sugar content than the normal sugary varieties.

But that isn’t all. Today, there are synergistic and augmented traits. Both types combine genes from su, se and sh2 varieties. Synergistic types contain either heterozygous or homozygous se genes, plus some su and sh2 traits and produce ears with mixed kernel types. Vigor is good.

Augmented varieties are sh2 types, further enhanced with se and su genes. The result is very tender, sweet kernels without the characteristic supersweet crunch. Vigor can be a concern with augmented types and harvesting without damaging the ears can be difficult.

“The industry is constantly changing. Now we have combinations of traits,” that when mixed together, work differently than when they stand alone, Roegge said.

In addition to these traits, all of which are from traditional breeding methods and involve various combinations or expressions of dominant and recessive genes, there are genetically engineered sweet corn varieties. Varieties engineered to be tolerant to herbicides and GE varieties which, in addition, are stacked with added Bt proteins, for protection against common pests, are available. Because cross-pollination is a concern, many sweet corn types require isolation from other sweet corn, as well as from field or popcorn.

“Know your customers,” Roegge advises growers considering genetically modified seed. “Consider costs and ask yourself why you are growing GM corn,” and if alternative methods of insect or weed control would be more cost-effective.

Depending on soil type, the amount of nitrogen needed for a sweet corn crop varies, Roegge said, with sandy soils, low in organic matter, requiring more. Other important soil nutrients for sweet corn cultivation include potassium and phosphorous, which should be applied after soil testing, once per year.

Nitrogen is typically broadcast when preparing the fields, applied at planting and side-dressed during the growing season. A pre-sidedress soil nitrogen test (PSNT) has been developed, to guide growers in proper nitrogen application rates for their soils.

Seeds can be treated with fungicides or insecticides to protect against prevalent diseases or insects. Treatments are recommended in certain circumstances, such as early sowing of super sweet types, or in other situations where disease or pest pressures are of concern. Seeds are planted in rows approximately 30 to 36 inches apart, with about 9 inches between seeds and planted at a depth of one to 1 1/2 inches.

Planting is done at a rate of roughly 20,000 seeds per acre, depending on soil type and how readily the variety tends to sucker. Suckering does not produce any additional ears, but makes picking more difficult and occurs more readily when planted at a lower density. Planting corn can be accomplished by hand, or using a variety of planting equipment, including plateless planters, vacuum planters, or finger pick-up planters.

Cold soils reduce germination, so if planting occurs at less than optimal temperatures, planting more seeds per acre is recommended. Because early sweet corn can command a higher price and can attract repeat customers, early season sowing, in cold soils, is common. Soil temperatures below 50 degrees Fahrenheit will not support corn growth.

Growers can opt to use plastic row covers to warm soil and encourage germination for earlier planting dates. Seeds can be sown through holes cut into clear or black plastic mulch. Alternatively, clear plastic can be placed on top of the rows after seed has been sown. In this system, the plastic is removed after three consecutive days of 90 degree temperatures, measured under the cover. Transplanting corn is possible, but isn’t cost effective or practical on a larger scale.

Corn growth is divided into three stages: germination to knee-high; knee-high to tasseling; and tasseling to maturity. In the first stage, cold soils can be problematic, or fertilizers can cause seed injury. Fungal, bacterial and viral diseases, as well as soil pests such as nematodes, can also infect seeds or seedlings. Cold nights after early sowing can cause seedlings to become deficient in nutrients until the roots system of the plant matures. Windy or dry soil conditions can inhibit secondary root development.

In stage two, the plant is growing most rapidly and its nutrient demands are high. In stage three, pollination and grain fill occurs and the sweet corn is harvested, prior to full kernel maturation. Adequate water is important, particularly at tasseling and kernel fill.

Insects can cause many problems with sweet corn production, throughout all stages. Corn earworm, European corn borer, armyworm and other caterpillar pests are primary insects of concerns. Japanese beetles, corn flea beetles, aphids and wireworm, among others, can also cause damage in sweet corn crops.

Corn earworm is considered the most important sweet corn pest and monitoring pest levels is recommended. Heliothis traps with pheromones should be erected one week prior to tassel of corn and monitored daily, Roegge said.

Fresh corn silks attract the moths, who lay their eggs. Eggs hatch, depending on temperature, within a few days and the worms burrow into the husk. The silks grow an inch or more each day and moths continue to lay their eggs, requiring repeat passes with insecticides, until the silks turn brown. Aside from pest pressures and temperature, the timing of spray applications can vary if nearby dent corn is in silk, which reduces the pressure on sweet corn fields.

“Your challenge as a grower is to get product on that silk so that the earworm larvae encounter that treated silk before it enters the husk,” Roegge said. “Once it gets to the husk, you cannot treat it, you cannot manage for it. You need to be monitoring pressures on your own farm, in your own locale.”

Earworm pressure is very localized in many parts of the country, requiring location-specific trap data. And, because corn earworm is also tomato fruitworm, a major problem in the South, pyrethroid use for control is common and resistance is growing. Earworm moths travel up from Southern states, where they overwinter, although populations have been found as far north as southern New Jersey and southern areas of Illinois.

Wildlife pressures from racoons, deer, bear, birds and groundhogs vary by region. Most larger growers plan on losses each year, while smaller growers may be able to use fencing or deterrents with some success.

Most sweet corn growers opt to hand pick corn. Very large growers, or those in areas with labor shortages, can utilize mechanical harvesting. Mechanical harvesting only allows for one pass through the fields and requires at least 10 acres of corn to be feasible. When hand-harvesting, secondary ears can be harvested a few days later, when they reach maturity.

Harvesting at the right time keeps kernels from toughening and sugar levels optimal. Corn is ready to harvest about 20 days after silking. Kernels will exude milky liquid when punctured and they will be plump. Silks will have begun to dry down. Sweet corn will decline in sugar content and kernel tenderness within days after it reaches its prime, with some types more sensitive than others. 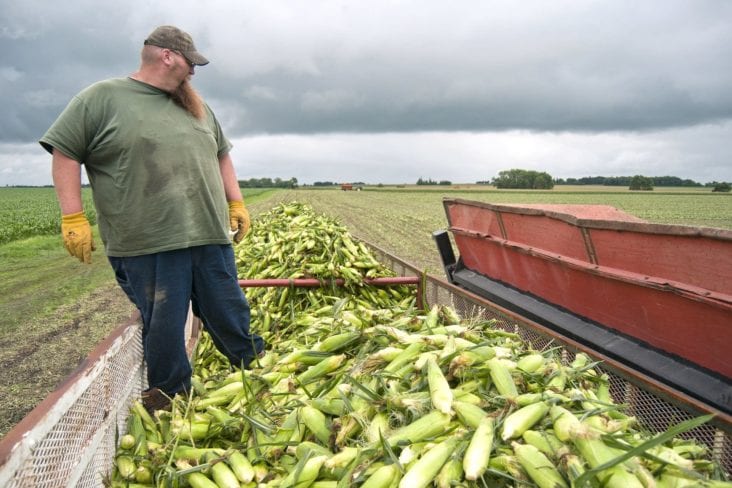 “Regardless of how you harvest, making sure that your corn doesn’t get overly mature on the ear,” is crucial, Roegge said.

Harvest should occur early in the morning, so the ears aren’t holding field heat. Hydrocooling quickly after harvest, then storing under refrigeration, keeping ears around 32 degrees and 90 percent humidity, is the best way to retain freshness.

If hydrocooling and/or cold storage – many smaller growers, like Roegge, are now using a Coolbot for a low-cost setup – is not an option, removing ears to a shaded area and not stacking boxes or crates, will help to disperse heat. Corn should be trimmed of long ear shanks and any excessive flag leaves, both of which can contribute to dehydration of the kernels. Sweet corn with su traits should be sold the same day it is picked.

Even after meeting the challenges of growing the crop and satisfying market demands, a sweet corn grower’s work is not yet finished.

“We always recommend a cover crop after harvest,” Roegge said. “Don’t let that ground be bare.”

Roegge presented a 2015 webinar covering the basics of sweet corn production which serves as a tool for growers seeking to begin or improve their production of sweet corn.