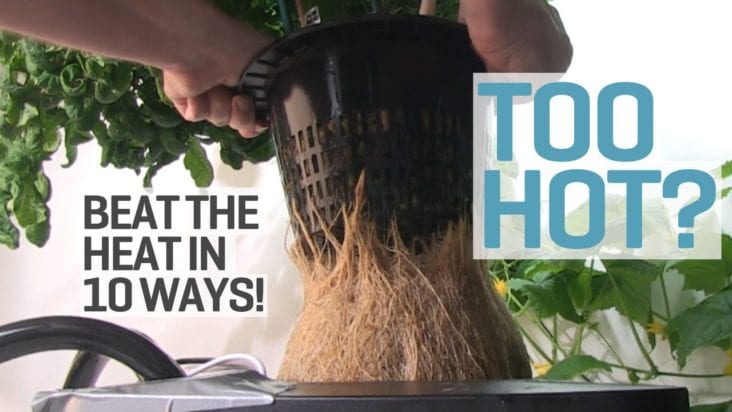 As a fruit, nut or vegetable grower in our changing climate, your biggest challenge will be growing with warmer temperatures. Impacts of climate change include shifting growing seasons, heat stress on some crops, reduced chilling hours for perennial tree crops, drought-like conditions in many areas and increased water salinity in other regions. Although the 3rd National Climate Assessment reports that changes in the growing season may have positive effects for some crops, it also states that reductions in the number of frost days can result in early bud bursts or blooms, consequently damaging some perennial crops grown in the United States. Changes in the growing season will affect the types of crops that can grow in any given location. – Growing with warmer temperatures

Marjorie Kaplan, associate director of the Rutgers Climate Institute, said scientific research will help develop more climate-resilient crops and management techniques necessary for adapting to a changing climate over the long term. For example, Rutgers scientists are engaged in various plant breeding and selection projects to safeguard cranberries and blueberries against climate change-related stresses. University of California-Davis researchers are using new tools to develop genetic markers of drought and disease resistance in grapes.

UC-Davis and Pacific Biosciences, a private genomics sequencing corporation, released a case study in October 2016 reporting that warmer temperatures attributed to climate change are already being recorded in many prime grape-growing regions of the world. Current wine grape breeding focuses on flavor, not hardiness.

In California, where the value of grape crops varies widely and is heavily influenced by local climate, it is especially important that new varieties thrive despite warming temperatures. Dario Cantu, a plant geneticist specializing in plant and microbial genomics in the UC-Davis Department of Viticulture and Enology, said advances in genomics, including single molecule real-time sequencing, could provide insights into better ways to breed wine grapes for resistance to disease and drought. “In a worsening climate, drought and heat stress will be particularly relevant for high-quality viticultural areas such as Napa and Sonoma,” he said in a statement.

Cantu was lead researcher on a cabernet sauvignon genetic sequencing collaboration between UC-Davis and Pacific Biosciences. In a statement released by UC-Davis, Cantu said, “This new genomics approach will accelerate the development of new disease-resistant wine grape varieties that produce high-quality, flavorful grapes and are better suited to environmental changes.”

Using Pacific Bioscience’s new genome sequencing process, Cantu is developing the genetic markers necessary to combine important traits into new varieties. Cantu said: “What we grow are the worst genotypes for many reasons, but they are the best for flavor. They are susceptible to diseases and soil-borne pathogens. They are absolutely not drought tolerant. But we still grow them because they have the names we want to associate with our wines.”

Although grapes grow everywhere in California, the genotypes are the same in Central Valley, Napa and Sonoma. This lack of species diversity creates vulnerability in the wine industry, especially while effects of climate change are becoming more severe. For optimal growth, wine grapes will require the same kinds of frequently updated, region-specific varieties used for most crop plants. Cantu is working on the entire vineyard ecosystem, sequencing the host, the plant, beneficial microbes, pathogens and all other organisms associated with the plant. “We are moving the grape genomics field forward at an unprecedented pace because we have the best tools in our hands,” he reported in the case study.

Nick Vorsa, director at Rutgers University’s Marucci Blueberry and Cranberry Research and Extension Center, has been working with berries since the 1980s. Early in his career, Vorsa collected over 600 germplasm varieties of cranberry to provide a gene pool and has identified four accessions. Today, the primary focus of his program is fruit rot resistance in cranberry and blueberry.

Fruit rot, a result of a fungal infection in the plant, has grown more prevalent with the hotter climate. Vorsa reported that fruit rot is probably the biggest threat to the industry. Although the researcher has identified four fruit rot resistant varieties, he said they’re not worth growing commercially, because they lack the productivity required for commercial sustainability. With funding from U.S. Department of Agriculture National Institute of Food and Agriculture’s Agricultural Food and Research Initiative, Vorsa has spent over 15 years introgressing fruit rot resistant genes into productive backgrounds of blueberry and cranberry. New Jersey cranberry and blueberry growers are supporting the breeding programs, as well as the Rutgers’ pathology program.

“We think we’ve made pretty good genetic gain,” Vorsa said. “What we’re trying to do is pyramid the fruit rot resistant genes, assisted with genomic analysis, from diverse backgrounds into one or two varieties to enhance resistance even greater.”

Now in the third breeding cycle since 1997, the Rutgers team is using molecular genomics analysis to speed up the process. As a result, researchers are now testing selections that have higher fruit rot resistance, good yield and other desirable traits, like insect resistance. “We’ve identified resistance in a wild Florida blueberry species that we’re trying to bring into the northern blueberries that grow here. The Florida species wouldn’t survive here, even though our climate is warming. It’s not warm enough,” Vorsa said.

In addition to fruit rot, New Jersey blueberries are now getting fungal diseases once thought to be present only in southern growing areas like North Carolina and Florida. Researchers suspect the warmer climate has changed principal fungi. Wisconsin is increasingly becoming more susceptible to fruit rot pressure as well. In response, Vorsa has steered Rutgers’ breeding program for blueberries to address these newly prevalent diseases.

If all goes well, Vorsa expects to release fruit rot resistant varieties of blueberry and cranberry in about eight years. “There’s the compulsion to try to get these out now and release them, but I feel we need to test these thoroughly before growers make that commitment. If growers make the commitment to planting these varieties and we haven’t fully tested them, it could be very bad for the growers.”

At a time when agricultural research is more important than ever, Vorsa said many breeding programs have been terminated. He urged support of research programs in breeding, pathology and entomology. “New races of diseases and insects will continually evolve. When I started in 1985, two insects were not even talked about, and now they’re back. The notion that agriculture is static is a false one,” he said.