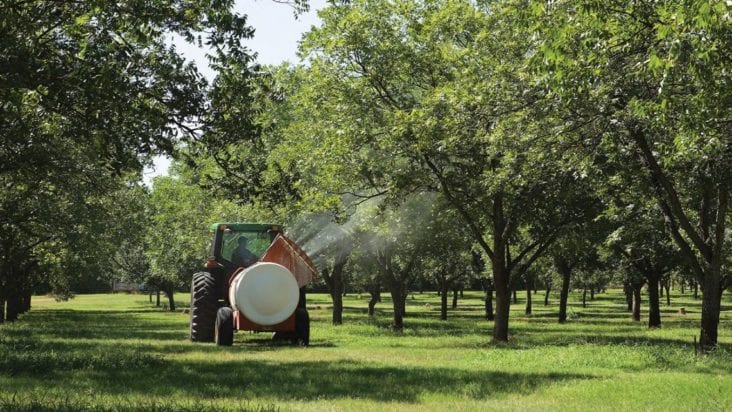 The foundation of organic production is building and maintaining soil health. With few exceptions, the inputs applied for fertility and for pest, disease and weed control must be natural, not synthetic. Management practices such as crop rotation, conservation tillage and cover crops are part of a system that strives for fertile soil while enhancing ecological balance.

In a press release, Melody Meyer, chairperson of the OTA board of directors, said, “Even with 3,000 farms in transition to organic production, more are needed to power organic forward. Now is a great time for new farmers to join us.”

In order to sell a product as organic, a grower who sells over $5,000 per year must be certified. The grower must not use any prohibited fertilizers, pesticides, genetically engineered products or other substances for at least 36 months prior to the first harvest of the crop. This is the transition period.

The National Organic Program (NOP) regulates the organic standards, accredits the certifying agents, maintains the list of approved substances, and conducts training and outreach activities. The NOP website (http://www.ams.usda.gov/AMSv1.0/nop) provides a wealth of information, including a link to the new farm bill’s organic funding opportunities.

Along with the other inputs for organic production, the NOP standards for fertilizer are detailed; they incorporate building the soil and adding nutrients with the green manures provided by cover crops, using crop rotations to help manage fertility, and judiciously applying animal manure and other nutrients. The NOP site also provides a link to the “National List of Allowed and Prohibited Substances.” It is codified in the U.S. Code of Federal Regulations and available at http://bit.ly/1huJoXI.

The national list includes a few synthetics as approved substances for fertilization, including aquatic plant extracts, elemental sulfur and liquid fish products. However, these as well as numerous natural substances have certain use restrictions, such as the source and rate of application. The restrictions can influence certification. In addition, organic certification agents require detailed records. Soil tests, which are critical for determining nutrient needs in any type of growing, will likely be required more frequently to document the need for a soil amendment. 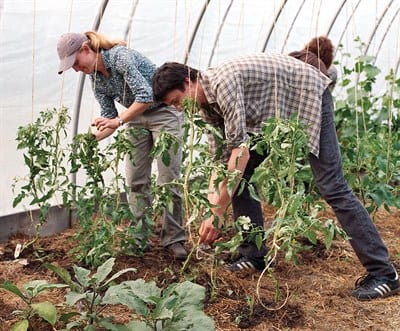 Organic production emphasizes management practices that retain and recycle nutrients. Nevertheless, specific nutrients are necessary to sustain plant production. The eXtension article “Organic Soil Fertility” (http://bit.ly/1tKBe4N) discusses the requirements, as well as the approved sources, and lists numerous references. It identifies the elements essential for plants to complete their life cycle. The authors note that carbon, hydrogen and oxygen account for about 95 percent of plant biomass and are supplied from carbon dioxide and water. Nitrogen (N), phosphorus (P), potassium (K), sulfur, calcium and magnesium are classified as necessary macronutrients. Micronutrients – those taken up less abundantly, but still essential – are iron, zinc, manganese, copper, boron, chlorine and molybdenum.

According to the article, organic fertilizers can be more expensive, bulkier and less uniform than their conventional counterparts. Growers should know the nutrient analysis of the fertilizer and whether it is allowable under the NOP. In addition, the article describes the types of fertilizer and offers caveats about their desirability in specific applications.

A condensed description of common amendments follows. Alfalfa meal contains N and is commonly used in high-value crops due to its expense. Ash, with both P and K, also acts as a liming agent. Overapplication should be avoided because of alkalinity and salt buildup. Bone meal is high in P, but N content varies. Concerns about bovine spongiform encephalopathy could limit exports. The solubility of blood meal can vary; its ratio is typically 13:1:0. Calcium sulfate is a good source for sulfur and useful for alkaline soils with high sodium content, but gypsum from recycled Sheetrock should be avoided. Cocoa shells, also used as mulch, have slow-release properties. The analysis is 1:1:3.

Overapplication of dolomitic limestone has been considered a problem. Calcium magnesium carbonate is considered an effective limestone source. Feather meal, a byproduct of poultry processing, is 15 percent N, but it can transmit avian flu. Fish emulsion ranges from 4:1:1 to 9:3:0 and is suitable for foliar feeding and transplants. However, the source should be evaluated, because P content higher than 4 percent may indicate the presence of chemical fertilizers. Granite dust is slow-release and has K, but availability varies. Greensand, typically 0:0:3 or 0:0:6, also contains iron, magnesium and silica. High-calcium limestone is valued for calcium and liming if magnesium abundance is not a concern and soil is not alkaline. Hydrated lime, although a component of an approved fungicide, may not be allowed as a soil amendment. Potassium sulfate, good for high-magnesium soils, must be used carefully, and NOP rules do not allow acid or other treatments.

Rock phosphates supply P most effectively in soils with a pH of less than 5.5. Seaweed and kelp analyses vary, and they are high in iron, copper, zinc, molybdenum, boron, manganese, cobalt and alginic acid. Kelp meal can be applied directly to the soil or in starter fertilizer. However, high salts and metals are possible, and seaweed and kelp are relatively costly. Seed meal can be difficult to source because of the prevalence of genetically engineered crops. Sodium nitrate can provide no more than 20 percent of the crop’s total N requirement, according to NOP regulations. It can cause sodium buildup. Soybean meal has a medium N release rate, but the certifier must be consulted due to the widespread usage of genetically engineered soybeans. Sulfate of potash and calcium sulfate can be used if the mined source has not been treated with acid or any other chemical reaction to make the K more available. Potassium sulfate is a better choice for high-magnesium soils, but must be used carefully.

Manures and composts, while significant in organic production, deserve careful study. Nutrient contents vary widely. The article recommends application on the basis of P, because usage as an N source can lead to overapplication of P. Also, in the NOP program, animal manure can only be used on crops for human consumption if it is incorporated into the soil at least 120 days prior to harvest for crops that contact the soil. For crops that do not contact the soil, the period is 90 days.

The pH is critical because it affects the ability of plants to directly take up nutrients. The pH also influences nutrient solubility, microbial activity and root growth. Plus, pH requirements vary by crop.

Compost can be applied any time, but must conform to NOP standards. It must be produced through a process that combines plant and animal materials with an initial carbon to N ratio between 25:1 and 40:1. An in-vessel or static aerated pile system must maintain temperatures between 131 and 170 degrees Fahrenheit for three days. The windrow system must maintain those temperatures for 15 days and must be turned a minimum of five times.

Rodale Institute’s executive director, “Coach” Mark Smallwood, said, “The three most important things to know about organic farming are compost, compost, compost. Photosynthesis and soil biology are the ultimate soil builders. In addition, you can use compost tea and compost extract. Compost extract can be prepared in about a half-hour.”

Smallwood explained, “You add water to the compost and pump air into the mixture. This creates a liquid version of compost that can be used in spray tanks and waterwheel planters. Compost tea requires a brewing process and creates a concentrate of good soil biology. You provide water and oxygen as a medium for the microorganisms to procreate. We recommend brewing compost tea for at least 24 hours. Beyond compost, crop rotations and cover crops are essential methods for building healthy soil.”

Jeff Moyer, Rodale’s farm director, added, “Compost is always best, but where composting is difficult – for instance, on the West Coast, where there is generally less moisture – crop rotation and cover crops help to build the biodiversity belowground.”

Both offered suggestions for growers transitioning to organic, especially those who don’t have particularly fertile soil and are planting crops with high nutrient requirements.

Smallwood advised, “When transitioning, soils will be depleted of biology. We don’t recommend starting off with crops that need a lot of biology and nutrients. Soy is a legume, so it increases the nitrogen and acts as a cash crop that does build soil.”

Moyer said, “Use cover crops and crop rotations to build the internal fertility of the soil. As the health of the soil improves, the fertility improves. In the short term, a farmer may bring in approved fertilizer materials and other soil amendments.”

Rodale is credited for spearheading organic farming in the U.S. The institute offers webinars, online courses and numerous events at the farm in Kutztown, Pennsylvania. More information is available at http://www.rodaleinstitute.org.

Organic produce typically commands higher prices. Smallwood said, “Organic prices reflect the true costs of production. Conventional prices are artificially low. A part of this is the subsidies, but the larger picture is that big ag privatizes their profits, while the losses are socialized.” He explained that when toxic chemicals are used in abundance, they promote soil erosion and chemical runoff, which are costly to clean up when they enter water systems such as the Chesapeake Bay and the Gulf of Mexico.

Jeff Stoltzfus, adult agriculture educator for the Eastern Lancaster County School District in Lancaster, Pennsylvania, observed that some organic inputs are more expensive than conventional products, and the analysis is often low. However, he noted, “Manure, depending on location, can be cheaper than conventional products.” Lancaster County has large poultry operations, and Amish farms use horses and maintain other animals.

On December 19, 2013, the Food and Drug Administration (FDA) announced that it would redraft four provisions of the proposed produce safety rule mandated by the Food Safety Modernization Act. One of the provisions is the standards for raw manure and compost. Many of the comments submitted to the FDA objected to the original proposal, which called for the harvest interval for covered produce to be 180 days, which is greater than the NOP rules. The FDA indicated that the revised proposed rule would be issued early this summer. Updates can be accessed at http://www.fda.gov/fsma.

In addition, many extension educators have experience with organic systems and conduct training sessions and webinars.