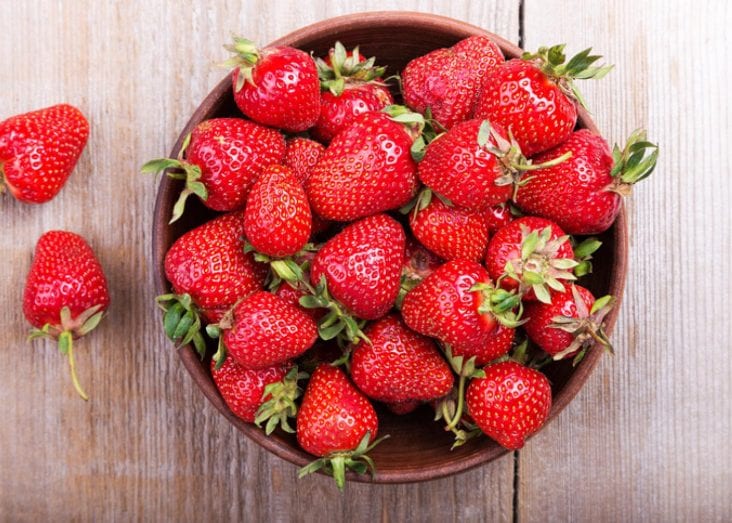 When one thinks of eating fresh, locally grown strawberries in the Northeast, it’s for a short period, perhaps from Father’s Day until mid-July at best. Thanks to the entrepreneurship of Paul and Kathryn Cooley, this is no longer the case for consumers in central New York state. In 2009, the Cooleys purchased a property near Penn Yan, N.Y., and established Seneca Breeze Berries.

“Agricultural-related work is a new venture for us,” said Paul Cooley, who has an engineering background. The Cooleys were initially thinking of a conventional you-pick strawberry farm, but after researching sustainable farming, they decided on a hydroponic strawberry farm using the vertical hydroponic system patented by Hydro-Stacker LLC (http://www.hydrostacker.com).

The area dedicated to the 15,000 strawberry plants, which grow in “stacks,” is less than 0.25 acre and is completely outdoors. There are 14 double rows of stacks (750 total). A 56-inch-high stack holds five Styrofoam planters, which each hold four plants. Growing a similar number of plants in the soil would take about 1.5 acres, and the potential expected yield would be about 1 pound per plant, compared to about 2.5 pounds or more for plants grown in the vertical hydroponic system.

“The system really appealed to us for a number of reasons – the ability to control all major aspects of production by computerization (except sun); the efficiency of the system; no requirement for tractors or large farm equipment; minimal fossil fuel usage; and ease of picking,” Paul explained. He has about $70,000 invested in the Hydro-Stacker system and about the same in site preparation, outbuildings, parking areas and protection of the production area, which is heavily fenced to keep wildlife out.

Since the plants grow in vertical stacks, there is no kneeling or bending required to pick the strawberries, making them easily accessible to visitors in wheelchairs. Another difference from the typical you-pick strawberry experience is the need for scissors, which are handed out to visitors with baskets. Visitors use scissors to cut the berries because the plants are growing in a perlite/vermiculite mix and can easily be pulled out of the containers if the berries are harvested the traditional way.

Kathryn is actively involved in the growing and sale of the berries, serves as the office manager, and also makes the jams, jellies and other value-added berry products.

The hydroponic strawberry production has been a rather steep learning curve for the Cooleys. “There isn’t much information available on the system with strawberries, so we’ve had to do some of our own experimentings, particularly with varietal choice,” Paul said.

The long season of producing large, high-quality fruit is a result of growing day-neutral (similar to everbearing) strawberry varieties and by feeding the plants three times a day. The day-neutral strawberry variety may not be the best for soil and field production, because even though they produce berries from about June to October, the size of the fruit is small. However, with the hydroponic system allowing regular feeding, the plants produce large, beautiful berries throughout the entire time. Computers control plant feeding, and each feeding takes about 21 minutes. The Cooleys likened it to giving the plants breakfast, lunch and supper.

After trying a number of day-neutral varieties, the Cooleys settled on Albion and Seascape. “The Seascapes seem to ripen just a little earlier than the Albions, but the Albions have a little firmer flesh, which makes them a better choice for chocolate-dipped strawberries,” noted Kathryn.

Plants are treated as annuals, with planting starting in April; if everything goes right, planting takes about four days. “The growing medium from the previous season is sterilized by using a product recommended by Hydro-Stacker and supplemented with a new medium,” said Paul. For them, the annual cost, which includes growing media, replacement plant cost and everything needed to run the farm, is $8,000 to $10,000 per year.

As frost is still a possibility at planting time, the couple is ready to protect the plants if necessary. Utilizing his engineering background, Paul set up the automation of the watering/feeding and pesticide application. The system is housed in a small building at the side of the growing area. There is little waste with this system, as it is possible to administer the actual amounts of nutrient solution and pesticide needed.

“We do everything we can to use the least amount of pesticides; this includes removing the dead leaves and decaying fruit from the plants,” Paul said. Production could probably go on past October, but he said, “Our season limitation is freezing of the water/nutrient lines.” Taking the system down at the end of the season is time-consuming, but Kathryn noted that Paul now has a system that doesn’t take too long.

The farm’s location, just off Route 14 (Seneca Wine Trail), makes it well-suited for a successful you-pick operation. A glance at the visitor’s book shows that people from many parts of the world have picked berries at the farm, which is now in its fourth season. “Locals come on a regular basis to pick or to collect orders, and we have accounts with some local hotels [and] restaurants, and now some of the large local chain stores are wanting to contract with us,” said Kathryn.

Last year they had stood at a number of farmers’ markets, but have since cut back to just the market at the Canandaigua VA Medical Center on Tuesdays. “It was just getting too busy,” noted Paul. “After all, this was supposed to be a retirement project!”

Initially, people were coming just to pick berries, but now the Cooleys are excited to be involved with education. Cornell Cooperative Extension of Ontario and Yates counties held a special introductory course on agricultural hydroponics and brought the group to Seneca Breeze Berries in the afternoon for the show-and-tell portion of the course. Individuals stop in, call and email to ask about setting up a hydroponic system. And Paul is now the local representative for Hydro-Stacker.

In addition to commercial growers, homeowners buy a single-stack system, which provides space for 20 plants, or multiple stacks to increase the number of plants they can grow. The Cooleys grew an array of vegetables in the system last season, and annual flowers also grow well. “People can use them on a patio if you don’t have space for a garden or are not able to do all the work involved in preparing to grow a garden. You can produce your own vegetables quite efficiently using this system,” Paul said. He sold a system to an Amish family from northern New York. They successfully used the system with a battery rather than electricity. The system is also getting attention from larger producers and schools in the area. Some growers in western New York and growers near the Pennsylvania border were showing interest.

The system provides flexibility, and with increasing interest in sustainable, local production, it is likely that in the coming year’s you-pick farms like Seneca Breeze Berries will emerge with a diversity of fruits, vegetables, and flowers for consumers.