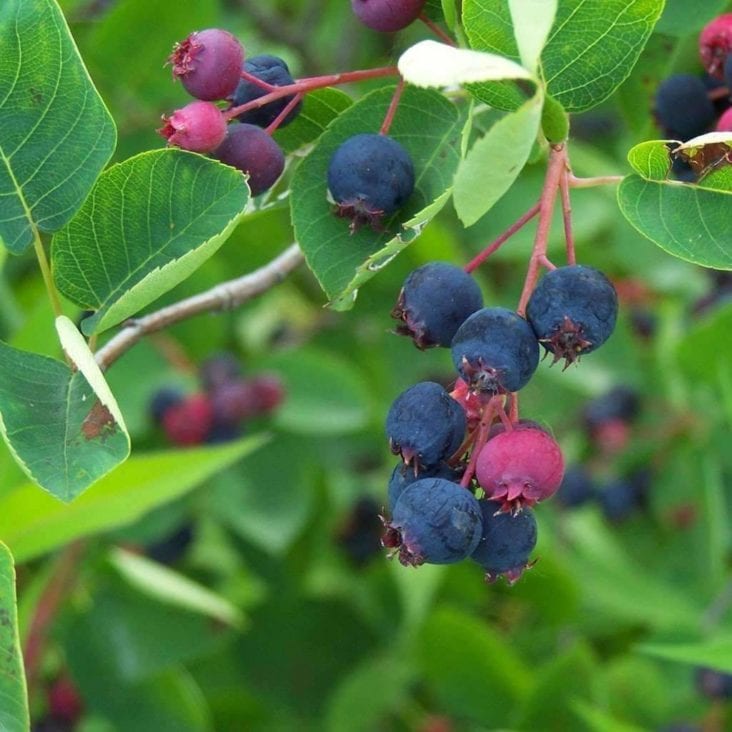 This new in-between fruit crop is not a berry hybrid created in a laboratory, but a truly northern native berry called a juneberry, (Amelanchier alnifolia) a Canadian cousin of the northeast U.S.’s serviceberry (Amelanchier canadensis), which is found as a tall shrub in northeast forests. These wild berries, which are bursting with high levels of protein, calcium, iron and antioxidants, are as old as the New World itself. They once sustained Native American populations and helped protect European settlers from scurvy.

Stephanie Craft, who owns G and S Orchards with her husband Gary, has planted .75 acre of juneberries. A portion of this is part of a research project of the Cornell Cooperative Extension, which is studying the viability of the crop in northern regions of the U.S. While June 2012 will be the first harvest season, buzz about the berry is already generating in the upstate New York region.

“We were lucky enough to have a local television news spot about juneberries and our farm,” says Craft. “The public’s interest has been overwhelming.”

I say juneberries, you say saskatoon

Juneberries, while relatively unknown in the northeast U.S., are popular in Canada, where they are called saskatoon berries. They have been grown on the Canadian prairies – currently more than 3,200 acres are cultivated – for consumption for more than 100 years. They are sold wholesale, in grocery stores and are available in pick-your-own orchards. Consumers eat them fresh or dried and use them to make pies, muffins, jams, jellies and other food items, similar to the way blueberries are used.

Jim Ochterski, agriculture program leader for Cornell Cooperative Extension of Ontario County, is leader of Cornell University’s juneberry research project. The project is studying the berry’s potential as a new crop in the northeast U.S. The berry is hardy to at least minus 40 degrees Fahrenheit and will grow in USDA zones 2 through 5.

“This is truly a winter-hardy fruit crop,” says Ochterski. “It is unlike many other of our fruit crops that have a Mediterranean origin.” He notes that other efforts throughout the northern U.S. have made inroads into promoting the juneberry. In the Midwest, where it takes the Canadian name saskatoon berry, a project is underway to promote the berry to growers and consumers. 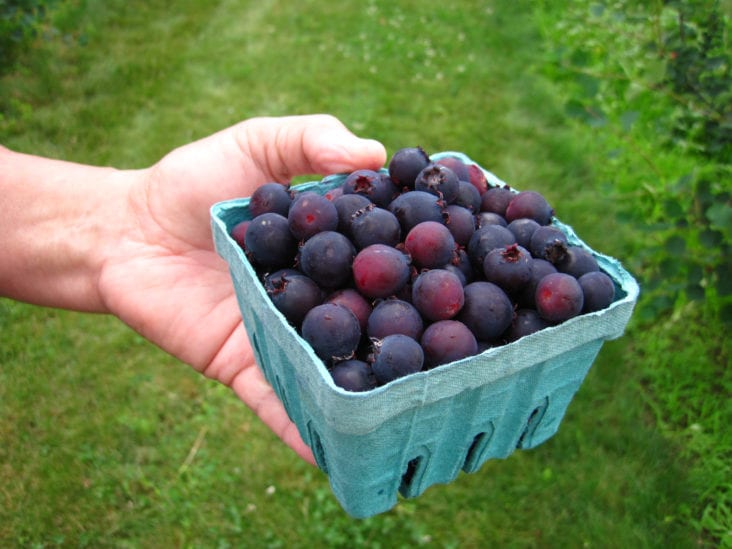 Ochterski predicts that demand for juneberries will come, at least initially, from pick-your-own operations. Growing small plots of juneberries is wise, at least until the research is completed on the plant’s production and pest issues that may occur south of the Canadian border. “These need to be well understood before a grower scales up to 20 acres or more,” says Ochterski.

The potential demand, at least from the research’s consumer taste testing, is promising. (See the full market research report here).

Where to find Juneberry Plants

Presently, most juneberry plant material can only be sourced in Canada. Below is a list of sources of juneberry plants, courtesy of Cornell Cooperative Extension of Ontario County. When ordering, make sure you ask for Amelanchier alnifolia, which is known in Canada and the Midwest U.S. as saskatoon berry. Varieties suitable for the northeast include: ‘Smoky’, ‘JB-30’, ‘Martin’, ‘Northline’, ‘Thiessen’, ‘Honeywood’, ‘Regent’, and ‘Pembina’.

For the market research completed on juneberries, more than 1,500 consumers tasted samples at a three-day agriculture exposition in upstate New York. The sampling study concluded that juneberries have a promising future with consumers in the northeast U.S. According to the report: “Most consumers in this study liked the flavor, the nutrition, or the combination of flavor and nutrition.” The marketing challenge, the study notes, is the fruit’s resemblance to domesticated blueberries. The report concludes: “Many consumers presume the flavor to be the same and find juneberries to taste like a bland blueberry … Some consumers felt the flavor experience with juneberries is superior to blueberries and expressed a preference for juneberries.”

There are several benefits to growing juneberries. One of the greatest advantages is that the juneberry does not have special soil requirements, such as the acidic requirement for blueberries. Juneberries do well in soil pH ranging from 5 to 8. It also adapts to a wide range of soil types from sandy, loamy, gravely to clay. It does not, however, adapt to flooded conditions. The fertility requirements are not complicated: supplemental nitrogen and potassium are sufficient.

Another advantage to the grower is the timing of the harvest. It is an early fruit that is ready for picking in the Northeast around the 4th of July. “This gives the grower a market access advantage, particularly if they grow multiple berries,” says Ochterski. As the strawberry season winds down, juneberries emerge, giving the grower another crop to offer customers while waiting for blueberries to ripen. Juneberries have a short fruiting season and are harvestable in a two to two-and-a-half-week window of time.

Another benefit is the early flowering of the juneberry, says Ochterski. “They are flowering the same time as forsythias, which is a benefit for the pollinators,” he says.

Juneberry bushes, which are self-pollinating, produce the first crop in the third year; growers can expect an average of 4 to 5 pounds of fruit per bush, although some yield up to 10 pounds.

The picking experience for the customer, says Ochterski, is “delightful.” Bushes stand straight up, between 6 and 8 feet tall. “It is ideal picking for little kids or the elderly since you don’t have to do much stretching or bending over,” he says. Plus, the fruit easily detaches from the stem, leaving little work to do once they are picked. Pits are soft and easily eaten and digested.

The ideal juneberry grower, says Ochterski, is one already engaged in fruit production for direct marketing or pick-your-own. “A grower who already has a solid customer base who is looking for something different to offer customers, a novelty. Those farms could do very well with juneberries,” says Ochterski.

The downsides to juneberries

The biggest obstacle at the moment is familiarity. Once consumers hear of juneberries, and their nutritional properties, some incorrectly assume it’s a “fabricated” or hybrid fruit, says Ochterski.

The other question is how the Canadian variety of the fruit will fare south of the border. “We don’t have a good grasp of the pest pressure yet,” says Ochterski. While the berry can be grown with a conventional or organic spray program, he does not recommend it be grown with a no-spray program. “Juneberries are of the rose family … pests that affect apples and common roses … Japanese beetles, fungus that causes fire blight, for example, are potentially threats to the juneberry,” he says. The Cornell project has a pest program outlined online.

There are also questions about mammal browse that Ochterski and the four experimental farms (each growing 100 plants for the research project) are trying to address. The farms are experimenting with grow tubes, commonly used by vineyards, to see if they protect the plants from browsing by voles, rabbit and deer. The research on the effectiveness of the grow tubes will be completed by the end of 2012.

Christopher Luley, a consulting arborist on the project, a research participant and owner of Happy Goat Farms in Naples, N.Y., says that despite the downsides, the potential for this new northern crop can be huge. Luley had initially contacted Cornell University’s extension office when he learned about juneberries; conversations with Ochterski several years ago ultimately led to the application for a research grant to study the berry.

“Juneberries have all the right characteristics for a commercial crop,” Luley notes. “I assumed someone was already growing them commercially … some places are in Michigan, but not here in the Northeast.”

Luley, who runs an organic vegetable and fruit farm, says that his test plot so far, which has rebounded from some rabbit damage, seems to be hardy and stress-resistant. “I will consider planting more,” he says.

He has brought some Canadian-grown fruit to local chefs to try in dishes. “Chef acceptance was high … they made sauces and they loved it because it was local and novel,” he says. “Anything you can do with a blueberry you can do with a juneberry.”