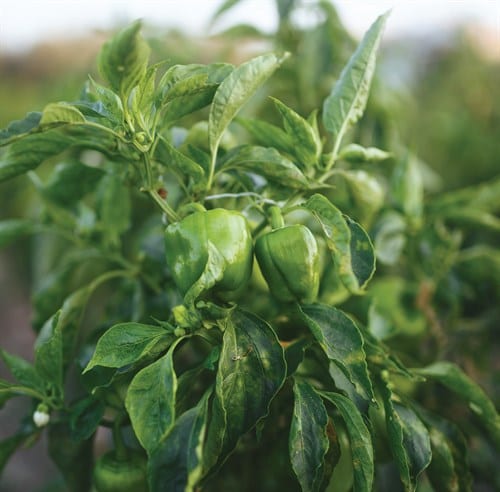 According to the Agricultural Marketing Resource Center (AgMRC) Americans consume an average of 10.6 pounds of fresh bell peppers each year and an average of 7.2 pounds per person of chile peppers based on data from 2014. 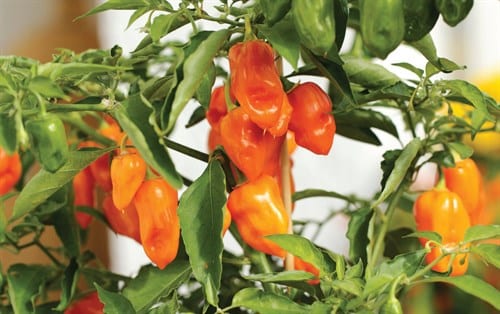 On its website, the organization reports that 1.535 million pounds of bell peppers for fresh market and processing were grown on approximately 46,500 acres in 2014. The crop was valued at $618.19 million. That same year, chile pepper production for fresh market and processing totaled 463 million pounds on 19,100 acres and was valued at $216.1 million.

Fresh peppers can be grown in virtually every state. “California, Florida and Texas grow the largest volume of the crop because of their extended growing season,” Orzole said.

Peppers belong to the warm temperature group of vegetables, hence California’s, Florida’s and Texas’ roles in production. Outside these areas, Michigan, Ohio, Pennsylvania and New York are among the highest volume pepper producers for short-season crops.

The plant falls into the Capsicum genus and is part of the nightshade family, scientifically known as Solanaceae. Other nightshade plants include tomatoes, eggplant and potatoes, excluding sweet potatoes or yams. Fresh bell and hot peppers are not classified in the family as those used for cracked pepper. Those plants belong to the genus, Piper and the Piperaceae family.

Peppers can be a good fit for growers looking to diversify crops.

“Locally grown peppers, both sweet and hot peppers, are fairly high in demand. Therefore, the market potential is good,” said David Trinklein, associate professor of plant sciences at the University of Missouri.

Peppers perform best in well-drained loamy soil. Organic matter can be added to tight soils to improve drainage and create a more conducive planting area. As with any crop, a soil test is the first step to establishing a productive crop. Trinklein explained peppers thrive in soils with a pH ranging from 6.0 to 7.0.

“An additional 50 pounds (1.1 pounds per 1,000 square feet) can be applied over the course of the growing season either through drip irrigation lines or as a sidedress application four weeks after transplanting,” he said.

Calcium is another important nutrient for pepper plants. Orzole said that soils that have too little calcium and extreme water conditions can lead to blossom end rot. Conducting a soil test and incorporating appropriate amendments create an environment to support a healthy pepper crop.

The University of Georgia Cooperative Extension “Commercial Pepper Handbook” recommends that “The beds are usually 60 to 72 inches apart from center to center and the rows on the bed are generally about 14 to 18 inches apart. On bare ground, space rows 36 to 42 inches apart with 12 inches to 16 inches between plants in the row.”

When planning row spacing between planting beds, account for the installation of plastic mulch, which needs an additional 20 to 24 inches of width beyond the planting bed.

Sweet bell peppers are typically a compact type plant. Based on the spacing described, growers can anticipate between 12,000 and 15,000 plants per acre.

It’s standard practice to prepare the field with plastic mulch prior to establishing a crop. Before laying the plastic, apply any preplanting herbicides, insecticides or fungicides. The plastic covering reduces weed pressure and conserves moisture and fertilizer. Black plastic that is 1 to 1¼ mil black plastic is the cheapest and most commonly used. However, embossed plastics, which are less prone to ripping, are common in windy locations; metalized mulches are another alternative.

Irrigation is a key component to a bountiful crop. Some growers choose drip tubing, which is installed below the soil’s surface. This setup must be in place prior to the plastic mulch. Other growers opt for drip tape, which is laid on top of the plastic mulch. In either scenario, it’s critical to know in advance which method is best for the field and to plan ahead.

Once the field is prepped, planting can begin. Orzole estimated that 90 percent to 95 percent of growers today transplant seedlings in the field rather than start a crop from seed. This is because it can take five or six weeks to establish a mature pepper plant.

“It’s relatively easy to grow a plant in a greenhouse under optimum conditions and transplant it into the field,” he said.

The spacing between plants varies based on the variety. Pepper plants fall into three main categories: compact, medium and spreading. Bell peppers are compact plants with 12-inch spacing.

Peppers, like tomatoes, can be staked to increase fruit size and yield. “The staking system somewhat depends on variety,” Trinklein said. “If the crop is staked, the ‘short-stake, weave’ system of trellising is most often used.”

Myriad diseases can afflict pepper plants. Trinklein highlights some of the most common biotic diseases.

Bacterial leaf spot is the most common and the most preventable. It is primarily a seed-borne disease that can be traced back to infected seed sources. Buy seeds from a reputable source and inspect transplant seedlings for signs of the disease prior to planting.

Phytophthora blight is caused by the fungus Phytophthora capsici and there is no single method of control. Instead, effectively managing this disease requires a multifaceted approach of prevention and treatment.

Anthracnose is a fungal disease that affects many plants, including vegetables. It attacks the fruit and prefers warm, wet humid climates. Crop rotation and disease-free seed is the best method for control.

Several viruses, including tomato spotted wilt virus and cucumber mosaic virus, are problematic in pepper crops. Cultural practices that include sanitation, timely control applications, crop rotations and disease-resistant varieties are all part of the larger effort to limit diseases.

“Crop rotations mitigate some pressures. Cabbage, cauliflower or broccoli followed by cucumbers and squash gives the soil ample time in between pepper crops,” he said.

When it comes to weed pressures, the plastic mulch is an effective control. Because the majority of commercial pepper producers use plastic mulch, weeds within the crop itself are not an issue.

“The black plastic blocks weed growth within rows. Between rows, weeds can be either mechanically or chemically controlled. Those weed pressures vary according to geographic location,” Trinklein said.

Although most often associated with weed control, the plastic mulch, particularly the metallized mulches, can contribute to disease control. The reflective quality of metalized mulches helps reduce the incidence of tomato spotted wilt virus infection on pepper by repelling thrips.

Harvest time is largely determined by the end consumer. Some growers specialize in green, whereas others wait for the pepper to ripen and change color. The “Commercial Pepper Handbook” states, “Bell (sweet) peppers for the fresh market should be harvested immature while fruits are firm, shiny in appearance, and have a fresh green calyx and stem.”

Orzole said most commercial bell pepper growers are striving for a 4.5-inch by 4.5-inch pepper at harvest. Hand harvest is the most common method for collecting the mature crop. Hand picking and packing limits damage to the fruit.

Smaller acreage farmers pack peppers directly in the field, whereas others, especially larger-scale farmers, transport the peppers to a packing facility. At the facility, the peppers are cleaned, sorted by size. Some growers apply a wax to the peppers to prevent shrinkage in storage; others do not use a wax.

Regardless of where peppers are packed – in the field or in a facility – sanitation is key. The “Commercial Pepper Handbook”pointed out illness-causing pathogens can be transmitted by direct contact from infected employees or animals, or through contaminated equipment and water. Follow proper sanitation guidelines and provide training to employees and ensure they are adhering to protocols.

Once the peppers are sorted and packaged they are ready for distribution. Traditional wholesale and retail markets are viable outlets for crops.

He emphasized that there is no guaranteed market for produce as there is for field crops and encourages growers to investigate marketing opportunities prior to entering into the production of peppers, or any other vegetable.

“There is potential for premium prices in the colored peppers,” he said.

He also advised experimenting with newer varieties, especially on the hot and specialty side. For example, a certain habanero provides a mild heat registering only 100 Scovilles compared with others at nearly 300,000 units.

“The Zavory pepper has a tremendous wild pepper taste without the heat,” he said.

Most importantly, he said, never sell a low quality product to maintain a positive reputation. Build and maintain relationships with your customers/buyers and they will generally stick with you.