What do peaches and sweet bell peppers have in common? It would seem not much. – Titan Farms

Peaches are a sweet juicy fruit that originated in China and migrated around the world as part of the ancient silk trade. The fuzzy fruit grows on trees reaching 25 to 30 feet in height. Once established, the trees bear fruit for many years. – Titan Farms 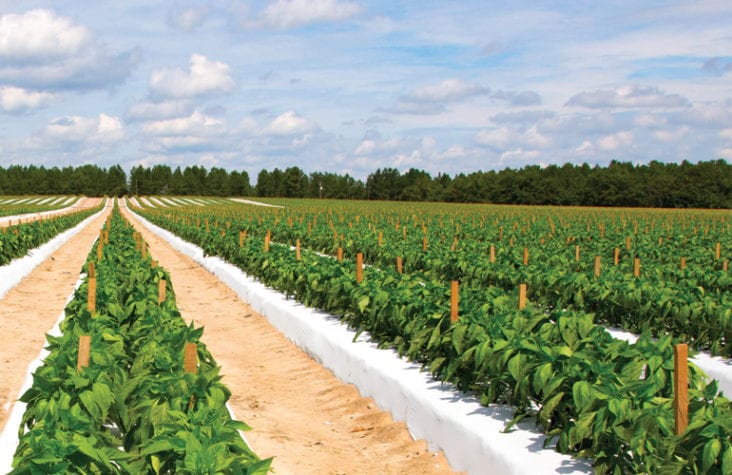 Sweet bell peppers are a vegetable that originated south of the border in Mexico, Central America and northern South America. They were first exported to Spain in the late 1490s and spread across Europe, Asia and Africa. Peppers grow on plants that peak at 1 to 3 feet in height and die back after one season.

The differences now established, in Ridge Spring, South Carolina, Titan Farms instead sees similarities. Both crops require hand-picking, precision packing and skilled marketing. For Chalmers and Lori Anne Carr, the owners of Titan Farms, concentrating on the similarities has proved to be lucrative.

Peaches generate nearly 80 percent of Titan Farms’ annual revenue with nearly 5,000 acres of orchards in production, a tradition that started prior to the Carrs involvement. In 1995, the Carrs moved to Ridge Spring in 1995 and Chalmers accepted a management position at R.W. DuBose & Sons, Inc. The farm was a family-owned pear operation that spanned several decades. Four years after arriving, the Carrs seized an opportunity to lease the farm and subsequently established Titan Farms.

In 2001, they bought out the farm and vowed to carry on the farm’s legacy of raising peaches, while spreading their wings and diversifying crops. When the Carrs researched other crops, peppers appeared promising. Like peaches, peppers require a skilled workforce to handpick each pepper. The farm already employed a few hundred employees and almost 650 H2A workers in the peak of the season.

The Carrs also sought to maximize the farm’s equipment investments. In the field, workers use many of the same containers to collect peppers as they do peaches. Once filled, the containers are dumped into larger plastic totes – the same ones used in the orchards. Then the peppers are transported to the packing facility and processed on the same packing lines as the peaches (at different times). 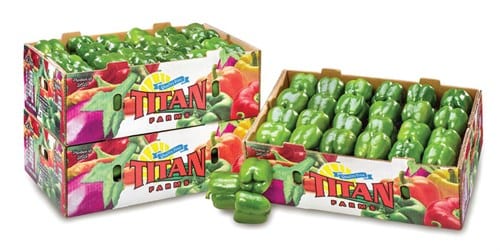 The icing on the cake was that the Carrs noticed the absence of large-scale pepper growers in the mid-Atlantic region. He could supply fresh peppers up and down the eastern seaboard as the seasons changed and halted production in the colder, northern climates.

“We saw a marketing opportunity and have been able to fill a niche,” he said.

Today, Titan Farms raises medium, large and extra-large sweet green bell peppers on nearly 500 acres. In the early years, the crop was planted and timed for a fall harvest. A decade ago, when the farm added a new peach packing line, they expanded their pepper operation to spring and summer.

“We harvest approximately one-third of the crop in the summer and two-thirds in the fall,” he said.

Carr acknowledged that the first step of a successful pepper crop is proper land preparation. The farm collects soil samples and sends them to a lab for analysis before any work is done. A pH between 6.6 and 6.8 is ideal. If the pH level falls outside this range, the farm applies lime to adjust the levels. Based on the results from the test, applications of gypsum and preplant fertilizer are made as needed.

Then the soil is worked using a 200+ HP tractor linked to a three-row super-bedder. This setup rolls and compacts the dirt into planting beds while injecting pre-plant soil fumigants. Three 32-inch raised beds are created inside each 15-foot swath. 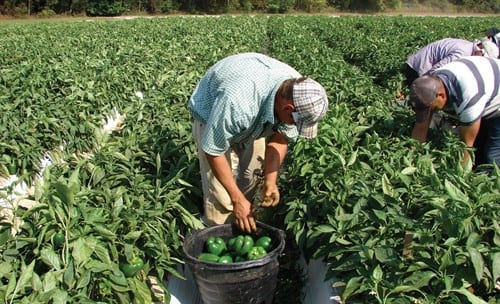 That process is followed by the installation of drip tape and plastic mulch. After the plastic mulch is laid, the irrigation lines are attached and the system is tested.

“We then put out a pre-emergent herbicide for weed control in the bare dirt middles between the rows of plastic mulch,” he said.

The next step is transplanting the greenhouse-raised seedlings into the beds. Once the plants are in the ground they are monitored. Soil moisture probes send daily electronic reports on the moisture and salinity levels present in the soil. “We’ve been doing this for the past four or five years and it has been very helpful,” Chalmers said.

Workers collect newly matured leaves each week and send them to a lab for analysis. “This tells us if the plants are receiving the right amount of fertilizer and helps prevent wasting it through over-application,” he said.

Mother Nature can be the most challenging opponent when it comes to pepper crops, especially in recent years. Carr cited the thousand-year flood that arrived in 2015, dumping 20 inches of rain in two days. That was followed by a hurricane in 2016 and record-setting heat in June.

“The weather has definitely made it difficult,” he said.

Along with unpredictable and cantankerous weather patterns, disease and pest pressures impact the crop yields.

The cabbage looper and the armyworm top his list as the most troublesome pests, but he added that a good integrated pest management (IPM) program tends to keep these pests in check. The looper is a foliage feeder and chews holes in the leaves rather than feeding on the fruit. When feeding is extensive, it can reduce the plant canopy and expose the fruit to sunburn. Armyworms are also defoliators of pepper. These insects will feed on fruit later in their lifecycle.

On the disease side, bacterial soft rot, scientifically known as Erwinia carotovora ssp. carotovora, is among the most challenging. The soil-borne disease splashes up onto the pepper and can break down the fruit wall.

“We have a great rotation with broccoli and since they are not it the same family, it breaks the cycle of the bacteria,” he said.

Broccoli is an ideal crop to follow peppers. The plants fall into different plant families, breaking the cycle for disease and insects. Broccoli also returns a good deal of organic material to the soil that peppers deplete during the growing process.

“When we lay new plastic, peppers are the first crop to go in,” he said. “We double-crop broccoli on the same plastic. We are able to get twice the use out of the plastic.”

The crop is grown in two seasons annually: spring and fall. “We harvest and pack about 150 acres during the spring season and 175 acres during the fall season for a total of 325 acres per year. Broccoli provides a great rotation crop in our growing system,” he said.

The combination of cultural and chemical controls has yielded positive results at Titan Farms.

During the spring and fall harvest, Carr sends workers into the field on multiple occasions to hand-pick the peppers at just the right time for size, wall strength and firmness.

“Our experienced workers pick an average of four to five, or as many as nine times, in the fall. This means we can pick the peppers at just the right time,” he said.

The peppers are hand-picked from the vine and placed into a plastic bin. The bins are emptied into totes and then transported to the processing facility for packing. The peppers are run on the same computerized packing as the peaches.

“The new technology in peaches is quite amazing and translates to peppers,” he said.

Finding a market for Titan Farms peppers is more than simply selling to a buyer. The Carrs pride themselves on having a marketing strategy and a sales team that differentiates their product from the competitors. First, they invest in branding their peppers as a high-end, high-quality product and choose packaging to support that level of quality.

They accept orders that request specialty packs and they also capitalize on trends. “The current consumer trend is a mix pack of red, green and yellow peppers,” he explained. “We try to be the green supplier in that mix.”

The farm also nurtures relationships with other green pepper producers. “The retail market likes a consistent supply. It’s hard to have a product for six weeks and then not have a product. So, we have partnered with other bell pepper growers so that together we can create a consistent flow of product into the marketplace,” he said.