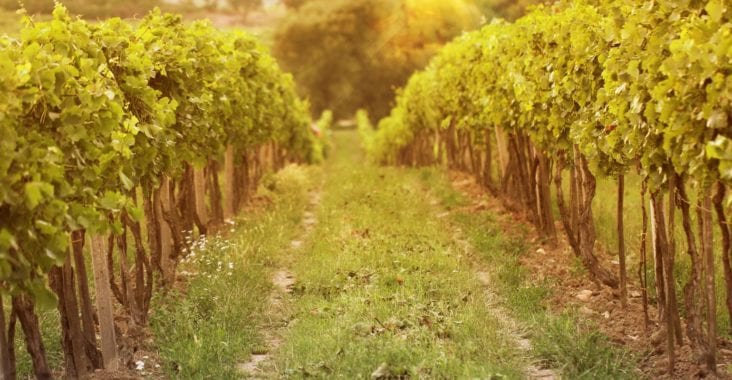 Growers are wise to establish a weed management program to combat any grape growth concerns. Weeds can harbor insects, vertebrates, mites, nematodes, and, just as importantly, diseases, according to the Cooperative Extension Service at the University of California. The Extension advises growers to develop a weed management program before any new vines are planted, because perennials are more manageable then. Weeds compete strongly during the first years after planting grapevines. At that time, vines have not grown fully, so weeds can take advantage of the lack of shade normally produced by mature vines and the existence of shallow soil.

Animals are a problem, too, during the beginning development of grapevine growth. Weeds can protect these animals well, allowing them to damage or kill younger vines, according to the University of California. Some varmints that can harbor inside the debris are field mice and gophers, and they like weeds near the trunk of the grapevine. Some of those weeds include broadleaves such as field bindweed and perennial clovers. Gophers feed on the roots, and their damage can lead to a weakened foundation or dead vines.

Severe weed competition can exist in the first three years of young vine growth, according to the University of California. Once the canopy grows, weeds are somewhat suppressed. However, excessive weed growth can restrict cultural practices and slow harvest.

A good weed management program requires flexibility. For instance, weed control practices can vary depending on where the vineyards are located in the United States or overseas, weather conditions, soil types, weed species, vine age, irrigation needs, land topography and a grower’s own cultural practices, the Cooperative Extension at the University of California noted. Depending on where a grower’s farm is located, soil texture and organic matter can determine the weed species that are present. It also can determine the number and timing of cultivations growers make. Herbicide applications and effectiveness are affected as well.

Read about: Safety and Credibility

For control under the vine row, growers can use chemicals or remove them mechanically, the University of California reported. They can even spread mulches on the ground to reduce weeds. Additionally, they can use subsurface irrigation to keep weeds from growing too rapidly. The Cooperative Extension reminds growers that sandy loam soils typically dry quicker than clay soils, thus they may require more cultivation for weed control. Weeds present on light-textured soils include crabgrass, puncturevine, horseweed, Panicum, curly dock, field bindweed and dallisgrass. The Extension advises to apply a low rate of herbicide on sandy soil or ones low in organic matter. Add a second application if necessary.

According to the University of California, growers should apply preemergence herbicides to bare soil, which allows them to move into the soil with the right amount of rainfall or irrigation water. These herbicides can disrupt germinating weed seeds, making them less of a problem. Other herbicides may require mechanical incorporation, but beware. The Cooperative Extension warns that if these herbicides rest on the surface too long before rainfall, irrigation or mechanical means is incorporated, they will break down from too much sun exposure, causing a decline in control. Another concern is that herbicides may not properly control larger weed seeds that have germinated. The Extension advises growers to make sure the residual period of herbicides won’t interfere with vine planting.

As with any herbicide use, follow label directions and be sure to accurately calibrate sprayers. Growers are wise to minimize spray drift with a short boom, the Extension noted, and use nozzles that minimize very fine-sized droplets, usually less than 200 microns since they drift easier. In addition, the Extension warns about allowing drift of glyphosate, oxyfluorfen and paraquat to occur to leaves, stems or suckers.

Part of a weed management program can include weed surveys. The University of California suggests conducting surveys twice a year, once in late winter and also in late spring or summer. A summer survey should tell growers what weeds are present in a vineyard and inform them of what control methods are necessary. Keep records of these surveys, as well as what control methods were used in each vineyard, to record weed species and populations from one year to the next, the Extension advises. Winter surveys help identify the weed species that growers were not able to control and what management plan they can use to best control them in the future. It also helps them identify any shifts in weed populations.

Following a well-planned weed management program can keep weeds out of the vineyard and from snatching nutrients, water and sunlight. The end result is impressive vines and fruit.