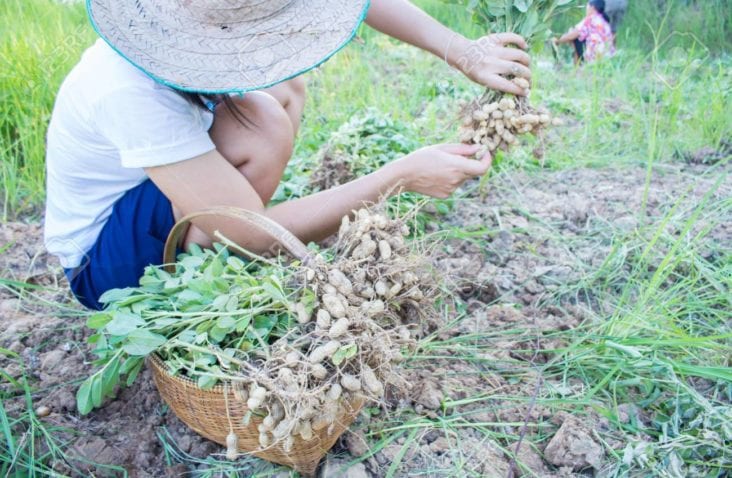 Southwestern peanut farmers have mastered the art of growing peanuts organically. Of the 11,940 acres certified for organic peanut production in 2005 (the most recent data set from USDA-ERS), 11,936 were located in New Mexico, Texas and Arizona. The remaining 4 acres were located in Georgia. New Mexico, with roughly 54 percent of the acreage, holds the title for top producer of organic peanuts in the United States. On average, that state’s growers produce 2,500 pounds of peanuts per acre, but it’s not uncommon for a grower to produce up to 4,000 pounds per acre. Conventional growers average 3,400 pounds per acre.

Reda about:  Growing Lettuce From Earth to Beyond

So, why the Southwest, as opposed to the Southeast, where 74 percent of this country’s conventional peanut acreage is located? For one thing, the arid climate. Low levels of rainfall and humidity and a high evaporation potential reduce the incidence of disease and, more importantly, reduce competition with weeds. Growers in the Southwest do wrestle with weeds (paying help to hoe is considered the largest input cost), but not to the extent that southeastern growers do.

For peanut growers in the Deep South, weed control is the biggest thorn in their side, the most difficult and costly aspect. Conventional peanut growers combat weeds with a suite of preemergent and postemergent chemical herbicides. Organic growers … don’t. There are OMRI-approved herbicides, such as clove oil, but it’s been shown they’re largely ineffective when it comes to controlling annual grasses and broadleaf weeds for the entire growing season. Besides, these natural herbicides come at a price and are likely not cost-effective over the long haul.

Read about: A Passion For Apples

In addition to rotating crops, planting cover crops, mulching and hand-weeding, one weed-control option is linked to the type of peanut selected. Cultivars that spread and form a canopy will shade the soil and limit weed growth. The University of Georgia Coastal Plain Experiment Station realized this and developed the Georganic, a runner-type peanut designed specifically for organic growers. Its runners demonstrate sprawling growth, as well as strong resistance to tomato spotted wilt virus and leaf spot (reducing the need for fungicides). It was released in 2006 by the USDA-ARS and the College of Agriculture and Environmental Sciences of the University of Georgia. Because it has a red testa, conventional growers shy away from it, but many organic growers grow it with great success.

Another option is cultivation. Although minimizing soil disturbance is important, when it comes to growing organic peanuts, cultivation is increasingly accepted and regarded as an economically feasible method for controlling weeds. Dr. Carroll Johnson of the USDA and Dr. Scott Tubbs of the University of Georgia have spent a good amount of time looking into this. After numerous trials with assorted types of equipment, fields and planting designs, they came to the conclusion that flex-tine cultivation is the way to go. Research trials conducted in 2006 evaluated wide and twin-row patterns with different cultivation frequencies (semiweekly and weekly) and durations (noncultivated, three weeks, four weeks and five weeks). The results showed weekly or semiweekly cultivation between wide rows of peanuts for five weeks was the most effective. That being said, light hand-weeding was still necessary. The wide rows were deemed more effective because the dense peanut canopy reduced competition with weeds. It is also important to note that cultivation was most effective before weed emergence. Flex-tine cultivators are of little use with well-established annual and perennial weeds.

Growers in the Deep South are understandably hesitant to spend time and money transitioning to organic if there is no guarantee a certified processor will be waiting at the end of the season. Processors are hesitant to build a new plant and go through the rigors of certification if organic growers aren’t present or can’t guarantee there will be a crop to process. This is a conundrum. New Mexico’s growers saw the need for a local organic processor and tackled it head on. Southeastern growers must organize themselves and do the same in order to capture a portion of this growing niche market. In 2008, conventional peanut farmers were receiving $369 to $508 per ton, organic farmers up to $900 per ton. Peanut researchers and farmers in Georgia have assessed the organic peanut industry and predicted where it’s headed: they’ve estimated it would require 93 million pounds of peanuts by 2015 and nearly 250,000 million pounds by 2023.

In January of this year, several strains of salmonella were found in peanut products processed in the Peanut Corporation of America’s Blakely, Ga., plant. More than 600 people were sickened and at least nine deaths were attributed to the consumption of these products. By June 12, the FDA was maintaining a list of 3,916 recalled products that potentially contained the bacteria. This was one of the largest product recalls in this country’s history. Because of it, PCA sank into bankruptcy and the South’s peanut farmers felt the pinch as demand fell. How has this affected the demand for organic peanuts? The numbers aren’t in yet, but more and more companies are adding organic peanuts to their products in an effort to capture that growing market. Southeastern peanut farmers, take heed.

The author, a brand new contributor to Growing, is a biologist who lives and farms in Vermont’s Northeast Kingdom.