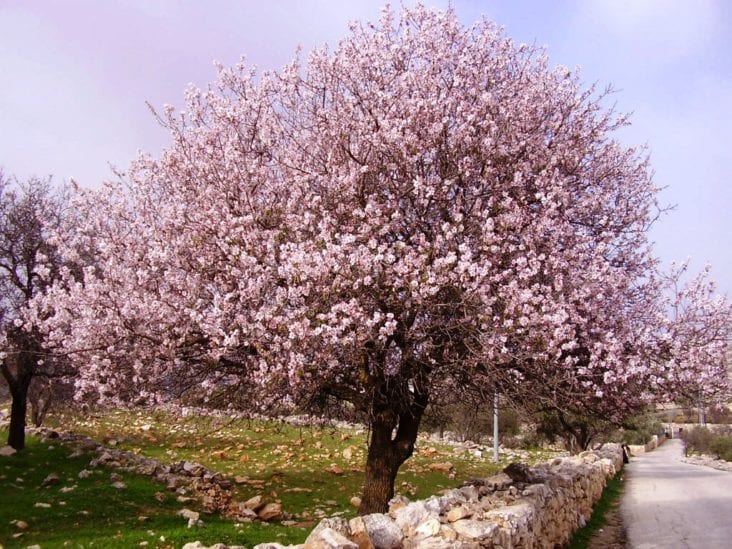 Almond tree has first been cultivated all the way back in 4,000 B.C. The plant is native to central and southwest Asia, while it was introduced to California in the middle of the 19th century. Almonds (Prunus dolcis) are widely used in candies, baked goods and confections. In addition, oil processed from nuts is also popular. The healthy and tasty fruit of almond trees is also used to aid a wide variety of physical ailments, as well as in folk remedies and traditional medicine for basically everything, from cancer treatment to corns to ulcers. Many look to grow them themselves. So what is the essential information about properly and successfully growing this plant?

How to Grow an Almond Tree

One of the most important things to know is that the trees do not tolerate overly wet. Also, they are extremely intolerable of the spring frost. When it comes to the best conditions for them, they thrive in mild and wet winters, and hot and dry summers while in full sun. If the region where you live does not meet these rather strict demands, it is unlikely that you will benefit from an almond tree plantation at your home. In addition, only a few varieties of almond tree are self-fertile. This means that they need cross pollination for the production of fruit. Therefore, you will have to plant at least two trees. If you lack space, you can even plant two trees in the same hole as they will will grow together and intertwine, meaning the flowers will cross-pollinate.

Almond trees are rather deeply rooted. Your trees should be planted in fertile, deep and well-drained sandy loam. They should have between 19 and 26 feet of space between them, and irrigated, despite being drought tolerant. You can apply nitrogen and organic fertilizer to aid the growth of the tree, as they have nitrogen (N) and phosphorus (P) requirements. In order to plant it, dig a hole wider than deeper and pay attention that the roots fit easily into the depth of the hole. Follow this step by watering in deeply. If your area is windy, stakes might be necessary. You can remove them after about a year to allow it to properly grow.

The care for almond trees varies according to the season. During winter or the dormant season, usually December and January, the trees should be pruned to allow light, promote growth, and remove potential dead or diseased limbs or suckers. You should clean the area of debris surrounding the tree to eliminate any overwintering navel orange worms. In addition, spray it with dormant oil to kill the annoying peach twig borer, San Jose scale and mite eggs.

During the blooming season in the spring, the care of almond trees include implies fertilization of the mature trees with manure or urea that is watered in, while the younger trees need small doses of nitrogen. You should initiate drip irrigation every day for the new plants, as the trees need from two to three inches of water. Established trees only need this amount on a weekly basis in the absence of rain with additional watering during drought. In addition, if you plant the tree in shallow or sandy soil, it will require more water to grow. During the summer season, continue the irrigation and fertilization at the same rate all the way up until the harvest season.

The harvesting of the almond tree fruit takes place after the hulls have split and the shell has become dry and brown. On average, they need from 180 to 240 days to mature, meaning that the nut, which is the embryo and shell, has dried to a minimum moisture content. To harvest the fruits of your labor, shake the tree so that they fall and then separate the hulls from the nuts. Freeze the almond nuts for no more than two weeks to kill potential residual worms. Finally, store them in plastic bags. The last thing to do is to spray the trees in the fall, during or after the leaves drop and before the winter rains arrive. This reduces the damage from the shot hole fungus when spring comes.