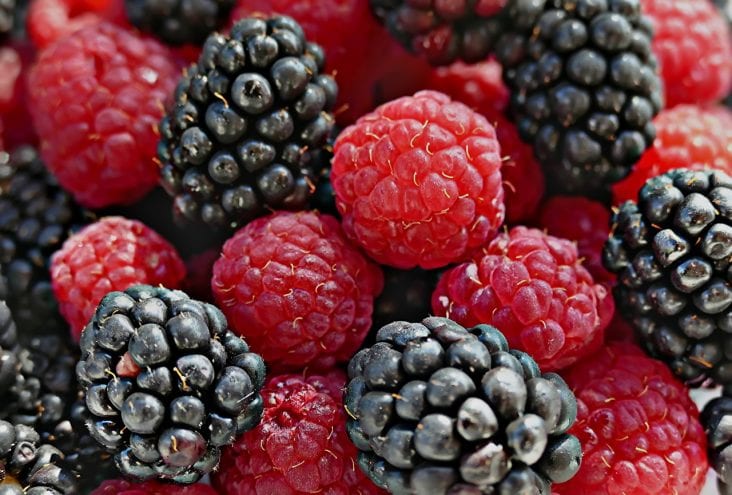 As celebrity chefs dazzle with their creations, and foodies extol the nutritional superiority of berries, consumer demand continues to soar. The brambles – including blackberries, boysenberries, dewberries, loganberries, raspberries – along with other berries, can be badly damaged by disease. The cane diseases, although caused by several fungi, require the same management controls.

The root system and crown of brambles are perennial, while the canes are biennial. The first year of a two-year cycle growth is called “primocanes;” the second-year canes are called “floricanes.” During the “primocane year,” a new cane grows and initiates fruit buds. In the second year, the “floricane year,” the canes bloom, set fruit, and then die after fruit ripening.

Anthracnose, caused by the fungal pathogen Elsino Veneta, affects black and purple raspberries more severely than red raspberries. It can be introduced from newly purchased disease-infected raspberry plants or from nearby wild plants. The buff-colored sunken pits often have purple raised margins. The lesions start in the parts of the cane between the leaves or buds (the internodes). As the infection weakens the canes, parts of the bark die, creating cracks in the canes. These weakened canes become more susceptible to winter injury. In severe cases, the lesions grow together, girdling and killing the canes.

The Anthracnose fungus overwinters on infected floricanes. In spring microscopic fungal spores (conida) spread to the new primocanes by splashing rain, insects, and wind. The spores germinate in a film of water and penetrate the plant tissue. Once the primocanes are infected, splashing water can cause the spores to invade the entire plant.

Spur blight fungal infections start in the leaves. The leaf edges turn yellow and eventually die. Caused by the pathogen Didymella applanata, the fungus moves into the stems and the canes, creating brown to purplish spots. These cankers spread up and down the cane, growing larger and encircling the cane. The leaves drop prematurely, then the buds on the primocanes shrivel and die. Spur blight targets red raspberries more frequently than purple raspberries. Black raspberries and blackberries appear to be resistant.

The buds next to infected overwintered canes usually will not sprout in the spring. With no leaves or flowers produced, the plants then become “leggy.” As the infection causes the bark to peel away from the floricanes in the spring, the fungal bodies form and the spur blight spores infect the primocanes the following season.

The dark brown to purple cankers of cane blight, caused by the fungus pathogen Leptosphaeria coniothyrium, typically form on the new canes near the end of the season. The cankers enlarge, spread down the cane which then cracks, and becomes brittle and breaks. Lateral shoots wilt and die as the cankers encircle the canes.

The cane blight pathogen survives in overwintered infected or dead canes. The reproductive bodies characterized by tiny black specks (pycnidia) develop in the cankered bark in the spring. The conidia ooze from them especially during wet periods, penetrate the canes, form lesions, and thus infect the canes. Pycnidia formed in older cankers complete the disease cycle.

Each of these cane diseases of brambles can cause extensive damage to the fruit and plants. The extent depends on the severity, the type of berry, and the variety. Cane diseases reduce yields, berry size, and quality; wilt lateral shoots and canes; defoliate the plant; and weaken and even kill the fruiting canes. Wet seasons produce greater disease pressure. In addition, once the disease infects the plant, the source of infection can last for years.

Dr. Mahfuz Rahman, extension plant pathologist, West Virginia University, reported, “The risk of cane blight is greatly increased when primocanes are injured or improperly pruned.” He further noted, “Although pruning cuts provide a major infection site, insect damage, herbicide damage, freeze injury, or injury from farm machinery or other mechanical operations will likewise provide sites for infection.” In one of his studies, he found that old, inappropriately pruned cane stubs were infected with the cane blight fungus in 80 percent of the cases in the second year.

Rahman’s trials in controlled lab conditions showed that the recommended fungicides Captain, Pristine, and Cabrio used by growers in the field were ineffective in suppressing fungal growth. Few other new fungicides such as Quilt Xcel and Inspire XT provided good control, yet the former was not available from the company to label it on brambles.

Even though a season’s weather pattern and choice of varieties affect brambles’ proclivity toward diseases, certain management practices can minimize or even prevent cane or crop injury.