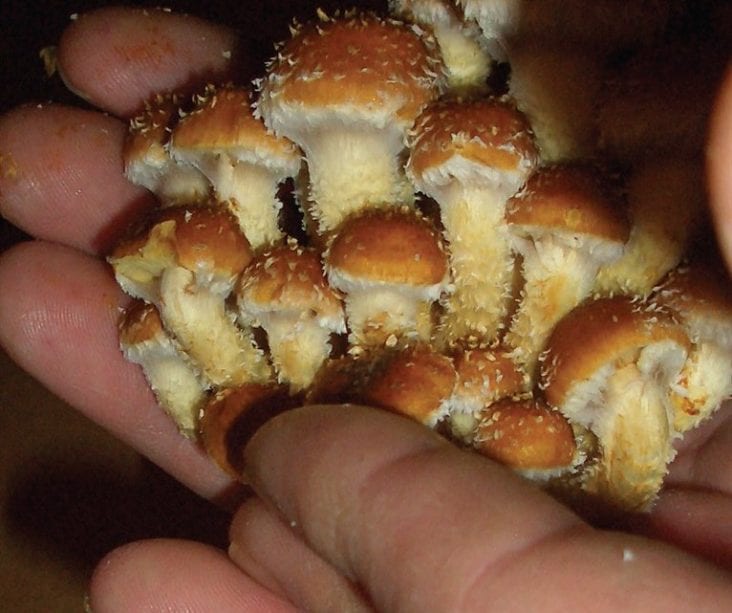 The process begins with mixing hardwood sawdust with two kinds of certified organic grains and water, then half-filling each bag with about 4 pounds of the mixture. Although sawdust left over from lumbering, furniture making and the like is readily available in the Tamworth area, Milligan gets single-species hardwood sawdust from lumber cut by band saw in a mill about 50 miles away. Because New Hampshire Mushroom Co. mushrooms are certified organic, they must be free of any possible contamination from chain saw bar oil.

After the bags are filled with the sawdust mixture, the tops are folded and the bags are compressed to remove air. Next, they’re placed in a super-insulated, steam-heated sterilization room. Currently, about 1,300 bags a week of the sawdust substrate are pasteurized at a temperature of at least 190 degrees Fahrenheit for 10 hours. The room’s capacity is 3,000 bags per week, a goal the company plans to meet in the future.

Once the bags of substrate have been sterilized, they are allowed to cool down to just under 100 degrees Fahrenheit before they are inoculated with spawn purchased from Northwest Mycological Consultants of Corvallis, Ore. (http://www.nwmycol.com). Following sterilization, cooling and inoculation, the bags are heat-sealed and tumbled in a custom-made machine designed to mix spawn and substrate. The tumbling machine is basically a piece of black plastic culvert fitted with wooden paddles.

The well-mixed bags of sawdust, grain and spawn are placed on racks in a radiantly heated incubation area, where they will remain until pins (dots about 2 millimeters in diameter) begin to form within the mycelium, indicating that mushrooms are beginning to colonize. (Mycelium consists of threadlike hyphae and is the vegetative part of a fungus.) Depending on the species, pinning will occur at anywhere from 15 to 75 days.

As the mushrooms grow within the bagged substrate, they produce carbon dioxide. Small areca palms, calla and sansevierias placed around the room help control carbon dioxide levels. Like the mushrooms, these plants thrive under broad-spectrum lights. While mushrooms do not need light to grow, they do need it to guide the direction of their growth.

When colonization within the bags has progressed to a degree distinguishable only to a practiced eye, the bags are removed from the shelves and cut open. The opened bags are placed in one of four climate-controlled growing rooms where mushrooms, fueled by sawdust, grain and water, continue growing. The requirements for each species are different. A computerized control system regulates growing room temperature and moisture to accommodate each. At predetermined intervals, a cool overhead spray mists the room’s center aisle. 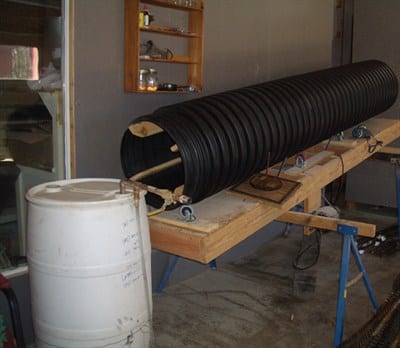 Cool-climate mushrooms grow best in temperatures around 60 degrees Fahrenheit. The slightest variations in temperature and/or moisture will affect yields. In the months that heat is needed, it is supplied by radiant heat generated by an outdoor wood-burning furnace. Carbon dioxide is also monitored. About 500 PPM (similar to outdoor levels) is ideal for cold-climate mushrooms. Growing room conditions are continuously monitored, and someone is always in the building to check for possible problems.

Mushrooms remain in the growing room until they are ready for picking. Most of the company’s mushrooms are ready in 25 to 35 days, but bear’s head mushrooms take only 17 days, while chestnut mushrooms take 80.

Workers scissor-cut the mature mushrooms three times a day. Cutting is timed to ensure that mushrooms will go to market while they’re in their prime, neither too wet nor too dry. Several 3-pound cases of blue oysters can be cut in an hour. Some varieties, like king oysters, are sized as they are harvested, so the harvesting process takes longer. Following sorting and boxing, the mushrooms are held in a walk-in cooler at 35 degrees Fahrenheit until they leave in the company’s refrigerated box truck.

Yields decrease dramatically with subsequent fruitings, so blocks are discarded and composted after the first fruiting. These blocks are prized by gardeners for use as compost. About 85 percent of New Hampshire Mushroom Co.’s compost is donated to a local school for use in its gardens and fields.

Cultivated mushrooms are a major part of New Hampshire Mushroom Co.’s sales, but they’re only part of the story. The other is wild mushrooms. In fact, it was the chance discovery of an estimated $100 worth of wild chanterelles while hiking in the White Mountains that inspired Milligan to consider establishing a mushroom business.

During the warmer months of the year, Milligan, his crew and some independent foragers pick a number of edible wild species. Last year they found dozens of different varieties, including matsutake, black trumpet, hen of the woods, chicken of the woods, yellow-footed chanterelle, hedgehog and lobster. According to the company’s website, one forager found, field-cleaned and sorted 173 pounds of matsutake from one location in one day. 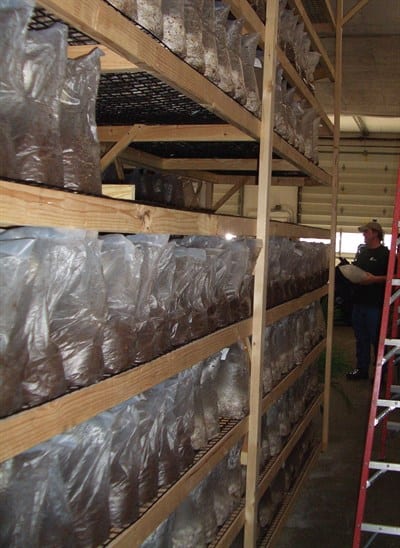 A wild and growing business

A theater major in college, Milligan was working as a dockhand on New Hampshire’s Lake Winnipesaukee, picking mushrooms in his off-hours, when a chance comment led to the discovery that a co-worker was also a mushroom hunter. Dennis Chesley, now one of eight partners in New Hampshire Mushroom Co., had been picking mushrooms for over 40 years. A third mushroom hunter, Keith Garrett, joined the two and helped found the business. Dr. Rick Van de Poll of nearby Sandwich, N.H., became their mycologist mentor.

Milligan and company put together several versions of a business plan for the mushroom growing and foraging business they envisioned. With a plan in hand, Milligan offered shares in the enterprise to seven other people while also looking for land around Tamworth, N.H., a spot midway between Burlington, Vt., Portland, Maine, and Boston. He found some land, but the owner suggested another piece of property with an empty building, formerly a concrete foundation company. Renovations to that building began in July 2012, and in September of that year (near the end of the wild mushroom picking season) New Hampshire Mushroom Co. started production. It was seven years from the start of planning to the first harvest. 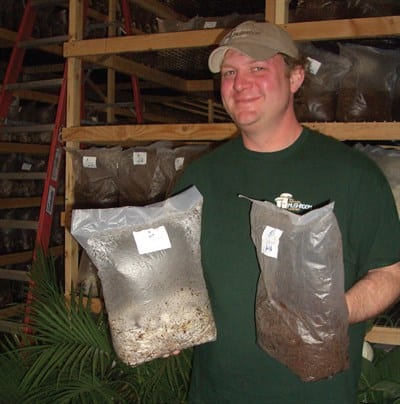 As of April 2013, New Hampshire Mushroom Co. is producing 500 to 700 pounds of mushrooms a week. Since the facility has the potential to produce 3,000 pounds per week, Milligan envisions adding several more species to the current seven. “This is the stepping-stone farm,” says Milligan. “We’ll experiment for two years, then expand.”

Both fresh cultivated mushrooms and fresh or dried (out of season) wild mushrooms are sold through wholesale distributors in three adjacent states, about 100 restaurants and eight natural foods markets. The company also sells at farmers’ markets and local farmstands. Requests for New Hampshire Mushroom Co. mushrooms far exceed production and have come from as far away as Texas. Specialty gourmet mushrooms retail from $10 to $20 a pound.

Less-than-perfect mushrooms, primarily wild ones, are dried and sold in the off-season. Bits and trimmings of the cultivated species are sold to specialty food manufacturers such as Nila’s Chutneys of Hancock, N.H., and Valicenti Organico, a fresh pasta company in Hollis, N.H. Local caterers and soup companies have also expressed an interest in bits and trimmings.

Kathleen Hatt is a freelance writer and a frequent contributor to Growing. She lives in Henniker, N.H.