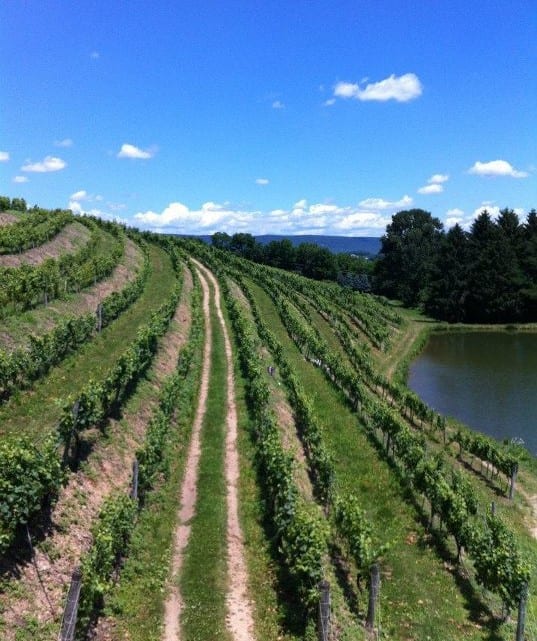 In his early 40s, Joe Greff sold off a successful multiple-office insurance business in Pennsylvania. Yet, his youthful personality wouldn’t allow him to sit still and, for instance… just sip a glass of wine. Instead, he used that windfall of income to pave the way into the grape industry.

At the first farm in New Tripoli, the majestic-banked winery overlooks two breath-taking mostly natural ponds, a frontage piece visible through glass surrounds and a large wrap-around porch off the sales and tasting room. Another view showcases the lifeblood of the operation: the sloped hills of vines of Chambourcin and Chardonnay.He combined his business savvy and his background as a microbiologist to become a grape grower. That decision has paid off. Greff, along with his wife Vickie, have amassed 50 acres of vines that’s known as Blue Mountain Vineyards. Its two locations—New Tripoli and Kempton, Pennsylvania—are five miles apart. 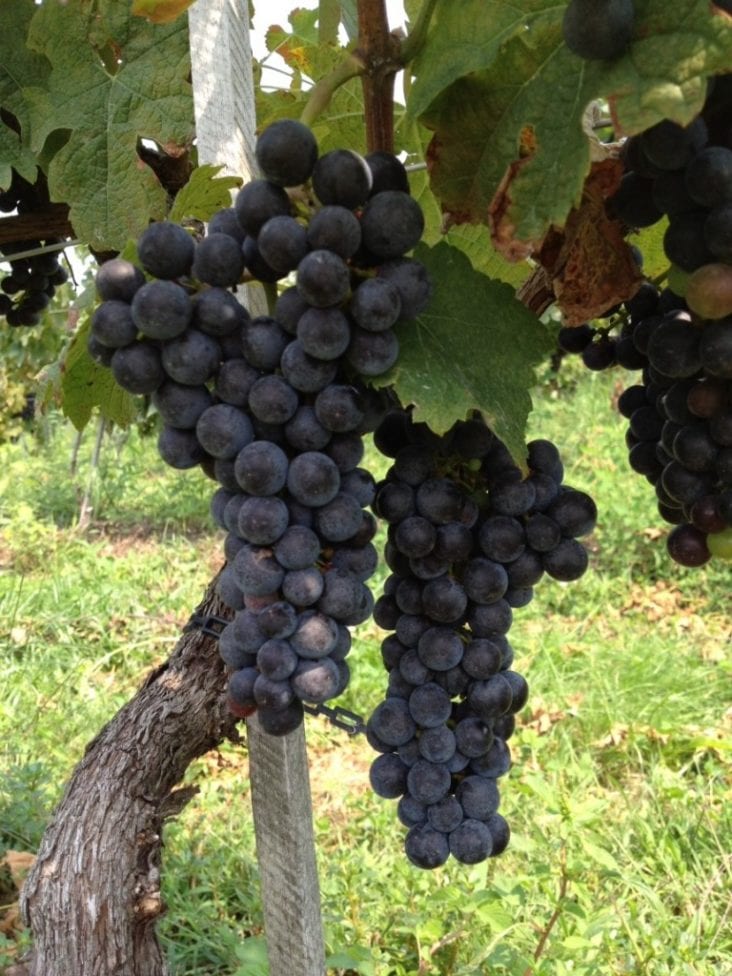 Within the shadows of the Appalachian’s Blue Mountain, the 14,000-sq. ft. facility—that includes a tasting room, retail and production space and plenty of deck space—mimics the Burgundy and Loire regions of Europe with its terraced vineyards while inspiring a Napa Valley feel. At the second vineyard, Leaser Lake is set on a historic pre-Revolutionary tract of land with a 7,500-sq. ft. pole building for warehouse space.

The wrath of grapes

Greff admitted having a winery of that size is a little more involved.

“You have to have capital. You don’t just plant the lines and it’s off to the races,” he said. “You’ve got to know what to plant, too, so it’s not so easy. Not everyone realizes it’s a 24-7 job, especially when you’re growing and making the wine.”

But with their signature vinifera line, Blue Mountain’s European Cabernets and Merlots, it’s all about quality control of the vineyard’s grapes and product. “We need to improve each year,” he said. “We need better and better quality. We want to improve the nuances of the wines, but not everyone does it this way. It depends on what you want to put back into the business.”

In 1986, they planted the initial vineyard of five acres consisting of French Hybrid varietals, such as Chambourcin, Vignoles and Vidal Blanc. Through research and experience they discovered that their Lehigh Valley area provides an excellent micro-climate for growing not only French Hybrid grapes, but also European varietals due to well-drained soil and a terrain very much like the central and northern parts of France.

Greff felt that with the similar climate and a soil composition (shale and limestone) that he’d be able to produce world-class “old world” style wines. Therefore, in 1988 the winery expanded the vineyard another five acres, planting Cabernet Sauvignon, Cabernet Franc, Merlot, Pinot Noir and Chardonnay.

“You look at the vineyard and all the vines are nice and straight, but they don’t grow like that,” Joe says. “We have to tuck the canes under the wires so we expose the berries to the sun. We also need to do leaf pulling. With Concords and Niagara grapes, he says, the fruit can grow wild. They’re easy to grow, but with vinifera vines, the fruit needs to be exposed. The growing season is barely long enough around here, so we need to get the berries exposed to the sun.”

It would be nice to say that all the blocs are planted from east to west to maximize sun exposure, but any grower uses what he’s given. The majority of vines in both vineyards are planted north to south through the rolling hills, an advantage over flat fields. It’s about angles—and the hills offer more varied angles for the sun to hit the fruit so it ripens.

But there are advantages to level ground. “If we were a bigger operation and using mechanical harvesters, working on the hills wouldn’t be conducive to keeping employees,” Joe says. “We still hand harvest. We always have and always will.”

These vinifera grapes have become their calling cards. Their reds achieve great complexity with bright fruits and subtle hints of earth, smoke and spice, and their whites remain extremely refreshing with balanced fruit and acidity to them clean and crisp. By the spring of 1998, they had the Leaser Lake tract and planted 20 acres of mostly vinifera grapes with the addition of Syrah, Petite Syrah and Riesling vines.

In April 2008, they were granted designation as an American Viticulture Area (AVA). Because of this, their wines are labeled as Estate Bottled. “It’s not just us,” Greff said. “We’re part of a wine trail that formed a committee that approached the federal government, but we’re a good part of the AVA.”

When they left California 25 years ago, wine was hardly the recreational beverage of choice in this Blue Mountain area. Beer was far more common in these old mining towns, and then gradually a combination of the two. “We were 25 years behind here,” Joe says. “Now, the whole attitude has changed.”

Once, there was one satellite store. Now, there are six. Over the years, some closed and others opened, but all the outlets remain within a reasonable driving distance so they can be serviced. “There isn’t one in Pittsburgh,” Joe says. “It’s too far to commute.”

The key to branding is quality and doing things the right way. “It stops right there,” Joe says.

But growing remains difficult. He’s usually the one spraying at 3 or 4 a.m. This past winter was the toughest the Greffs ever had. It put the season behind because of late bud breaks, which means fruit won’t ripen until later—some two to four weeks later—depending on varietal. “We’ll need a good long, dry fall, and good timing to harvest,” he says.

Pin Noir is a particularly finicky pick because of its skins. After the third day of rain past a scheduled harvest in the past, the berries burst from the moisture and the vineyard lost the two-acre crop. “It makes it sound so hard that no one would want to be a winery,” Joe says. “Sometimes, it’s out of your control. You’re thankful if it does work out. If not, you say that you hope next year will be better.”

The winery’s plan is to continue to plant to bring the total acreage to 100, but expansion doesn’t happen overnight, especially with European vines. It takes a minimum of five years before a light crop results.

Expansion would occur at Leaser, where the Greffs would even like to put in a convention center, and build up the trade, too. They could plant another 50 acres there, doubling growing capacity.

Yes, this is a business.

Blue Mountain Vineyards is growing 950 to 1,000 vines per acre, so at 50 acres, the math is routine, though the work isn’t. The vineyard produces about 35,000 gallons of wine a year; some 30,000 gallons are a direct result of what they grow.

It’s actually less expensive to bring in juice than to grow it, Joe explained. To start an acre of vines on site runs about $25,000, not counting the purchase price of the land, then a couple thousand dollars a year per acre to maintain it. Buying even good quality juice as Blue Mountain Vineyards does as needed costs $15 a gallon. 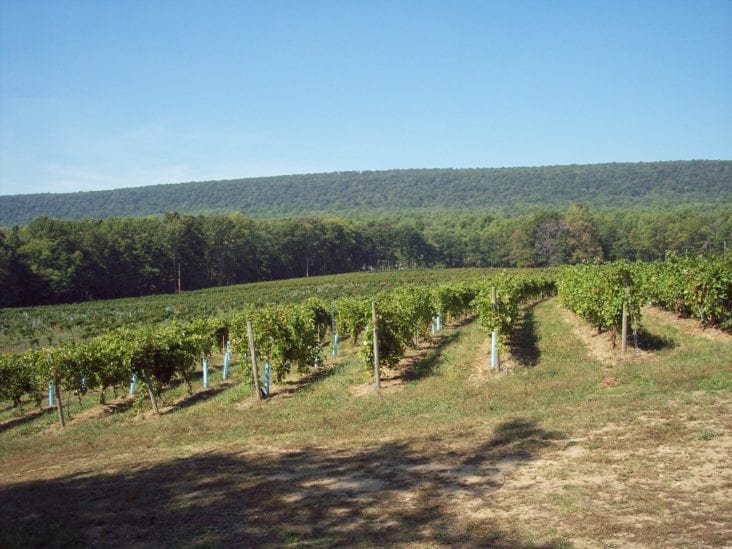 “That’s if we can continue to get it,” he says. “The quality out there can be suspect, and that’s not worth the risk—not after building up the business like we have. Again, we can’t jeopardize the reputation we’ve created.”

Greff oversees all aspects of the business, including the accounting. Vickie handles the marketing and the retail employees and the outlet stores. They live at the top of the hill in New Tripoli.

With a background in microbiology and insurance, Greff still looks for reasons to explain his interest in growing, but boils it down to two experiences. In his time with Boy Scouts of America, he achieved Eagle Scout status. Also, he spent a lot time on his grandfather’s dairy farm in Albany. “That was enough to know that I didn’t want to be a dairy farmer,” he recalled.

Like so many vineyard stories, the couple’s grape experience began in California where they met. Both liked wine. Greff was drawn toward the science. As a pre-med student at Wagner College in New York, Greff did his share of lab work—and still does.

Coupled with his business sense in insurance and with a casualty agency, the practical dollars-and-cents experience made taking the leap into the grape industry the “force that just made it make sense.” There, he struck a balance between the science and accounting ledgers.

It took a few years to find the right buyer for the insurance business, as well as Vickie’s assurance to leap into the next.

“I couldn’t have done this without her support, but she had her doubts,” Joe said. “She had security, income and this was a new venture. She had reservations. I let her ruminate over it for about for more than a year before doing it. We had (and still have) the passion, but this also had to make sense.”

Vickie is the one who found the first tract of land, the 38 acres of rolling hills in New Tripoli. It had been farmed, but traditionally with corn, soybean or alfalfa. One year later, they purchased it.

The second farm’s terrain at Leaser Lake in Kempton, acquired 15 years ago, is flat yet extremely historical. The Greffs expanded to meet increasing demand while sticking to their strong belief in growing their own fruit. The pre-Revolutionary Leaser property—which the couple immediately sought and achieved National Historic Register of Historic Places recognition for—is best known as the homestead of Frederick Leaser that includes the original mid-18th century settler’s log cabin, century-old barns, a 1849 restored stone house, a chicken coop and an early outhouse.

Leaser’s father Daniel, a German immigrant farmer, settled the farm about 1711-12. Leaser had his own still—a unique incarnation of a winery, perhaps—back in the day when men were taxed based on the number of cows, horses and stills owned. As the legend goes, he was in Philadelphia selling Apple Jack during the Battle of Brandywine when he was approached and told to turn over his wagon or it would be taken by force. He kept his wagon and then used it to secure the Liberty Bell in 1777 on a famous journey to Allentown to keep it out of British hands. A flag in Frederick’s honor flies over his tombstone at the farm.

Their Adopt-a-Vine program allows patrons to lease a vine for up to five years for $100, often used as a gift. Patrons are given a plaque at the site, for instance, a merlot vine.

“You can visit your vine,” Greff said. “You get a bottle of wine for it and a plaque and satisfaction knowing the connection to history—that that vine is planted on original Leaser ground where maybe tobacco or other crops were once grown.”

Their strong passion is centered on the quality growing and winemaking, and the business of leaving customers satisfied. It’s an environment that’s created from the fields to the tasting and sales room. The staff— six full-time and seasonal employees working in the fields, tank and tasting room—emulates their work ethic.

“At this stage, it’s more than a business,” Greff said. “It’s about pride and the drive now that you’ve risen and put so much into it. We could never jeopardize what we’ve created. Any successful business ought to be that way. It’s not just in wine. It’s not just Blue Mountain Vineyards.”