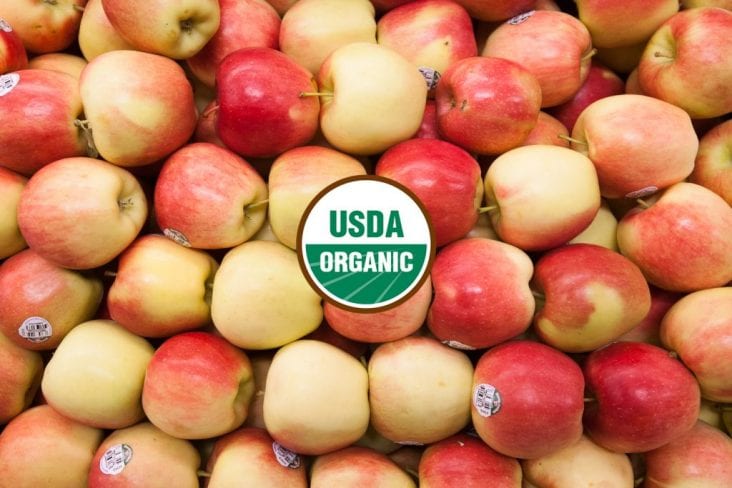 Caldwell is an organic vegetable crops researcher at Cornell University. When asked why there are so few apples grown organically in the Northeast, he replied, “I think the main reason is that growers and extension educators thought it was impossible until about five years ago. Since then, there has been an increase in organic apple acreage in the Northeast, but it is still a small percentage. Thinning the crop is a big challenge. Apples tend to overset the crop, and to get good fruit size and quality on a yearly basis, over half of the fruits need to be removed. We do it by hand, which is too labor-intensive for larger orchards. Conventional orchards use products to thin the crop that is not allowed for organic growers.

“In Washington and California, there are thousands of acres of certified organic orchards whose farmers have successfully resolved this and other problems. They tend to have lower pest and disease pressure than we do in the Northeast,” he continued. “I favor the model of local ‘community orchards’ that sell directly to the consumer, rather than on the wholesale commodity market. Organic methods are well-suited to that model, and our customers are very supportive and appreciative.”

Hemlock Grove consists of a 1-acre organic apple orchard in Danby and a smaller mixed-fruit orchard in West Danby in southern Tompkins County. Three years ago, Caldwell entered into a partnership with Melissa Smith and Amy Garbincus. Both women had worked at West Haven Farm, an organic apple orchard in Ithaca, N.Y., in the years that West Haven had helped Caldwell manage his orchard and marketing. All three partners have jobs off the farm.

Hemlock Grove has about 140 apple trees (on rootstock MM111 and MM106) on leased land in Danby, and on Caldwell’s farm in West Danby, there are 35 apple trees, 20 chestnuts, 10 hardy kiwi vines and smaller new plantings of pears, persimmons, and other fruit. Unlike many orchards these days, Hemlock Grove has big trees, not the modern trellis types, and there is a lot of diversity in apple varieties.

Jonagold, Liberty, Golden Delicious, Melrose, and Ida Red are the major apple varieties at Hemlock Grove. Up-and-coming varieties include Sweet Sixteen, Spitzenburg, and Honeycrisp. Northern Spy, Baldwin, Burgundy, Fuji and a plethora of other varieties may be represented by only a few trees each.

Scab causes unsightly blemishing of the apple skin, and conventional growers use fungicides to control it. Organic growers can use sulfur applications and clay-based products to help control scab, but it’s labor-intensive and less predictable than chemical applications. With intensive management, Hemlock Grove produces good market-quality fruit, and the organic growing methods are more important to the farm’s customers than how the apple looks.

“The way we market, it’s less dangerous for us to have questionable-looking fruit. We can sell them directly to people who are more interested in lack of chemical use,” Smith explained.

Garbincus thinks that the high labor commitment in organic apple production may hold back its expansion. “We have to thin the trees … and we actually hand-thin all of the trees. It takes time.”

Like many apple orchards in the Midwest and Northeast, Hemlock Grove was hit with hard freezes this past spring after the apple trees blossomed in the unusual March heat. Most of the crop was destroyed. Hemlock Grove started a CSA in 2011 but had to suspend it for 2012.

The young apple growers emphasized that healthy trees are the best way to grow good fruit. To prevent scab from overwintering in leaves, they windrow the leaves and add compost to break down the plant material.

Smith said, “That’s the kind of thing we want to do more and more, to keep the scab pressure down to start with, rather than trying to treat it with sulfur.”

A typical spray program at Hemlock Grove begins with sulfur sprays from first green to about summer solstice to fight scab. The surround is a kaolin clay wettable powder that is applied to cover the trees from “pink” stage through mid-June to repel plum curculio, with later applications including DiPel (Bacillus thuringiensis or Bt) for early caterpillar control.

Pheromone traps measure adult insect populations. When their numbers peak, the growers know the timing of the pest’s eggs hatching, and they can time Bt or other sprays like Entrust (spinosad) when they will be the most effective.

For all the work of thinning the apple trees, moving ladders to reach every apple cluster on a tree, there are benefits. Garbincus said, “It gives us the chance to take out some of those bugs early on. When we thin, we take all the baby apples and take them out of the orchard.”

Many of the apple varieties grown at Hemlock Grove have some scab resistance; the Liberty apple, widely planted and one of the workhorses of the orchard, is extremely scab-resistant, and Melrose, Paula Red, and Redfree offer some resistance as well.

Pollinators invite themselves to Hemlock Grove; no honeybee hives are brought in. The Danby area south of Ithaca does not have a lot of agriculture or large-scale use of herbicides or pesticides, which may account for the organic orchard’s excellent pollination by native pollinators in the area.

Hemlock Grove gets $70 per bushel wholesale for their apples. GreenStar Natural Foods Market in Ithaca, N.Y., retails the apples at about a dollar over the price for conventional apples ($1.79), so it’s about $2.79 per pound for Hemlock Grove’s apples. More people want Hemlock Grove’s organic apples than the orchard can supply, even in a good year. A good year is 500 bushels of apples (600 bushels in 2011). The growers are also happy with direct sales to customers through the CSA.

Hemlock Grove is not looking for value-added products, but applesauce and cider are made with lower-quality apples from the orchard. Smith said, “We’re going to make the most money selling apples as apples, so what we want is fewer apples that need to be made into a value-added product.”

Eastern apple growers have done a lot of trial-and-error research. For those interested in growing organic apples, Garbincus offers this advice: “I would talk to as many organic growers as I could. Talk to them about the varieties that they’re planting, how they’re doing, the rootstock. Compile as much information as possible from the people who are doing it right now.”

Garbincus and Smith agreed that they learned a lot from Caldwell. He owned his own organic vegetable growing business for years before joining Cornell’s organic research team. He said research on organic apples is starting to take off in the East: “Penn State University is doing a considerable amount of research on organic apple production. Michigan State, Cornell and the University of Vermont are also doing some. I think in general that the growers have led the way.”