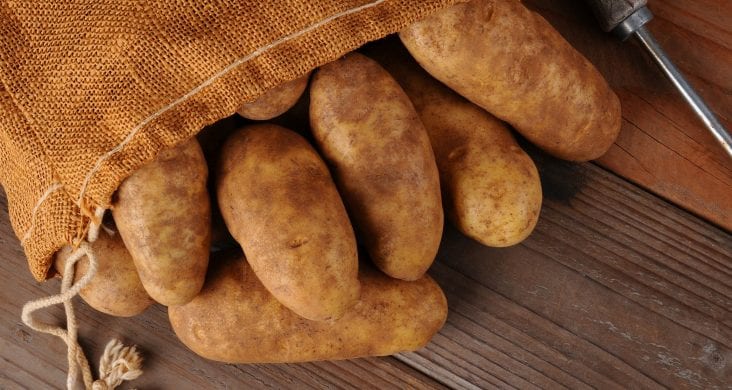 Dale Gies says of growing mustard greens,” We didn’t start this project to eliminate the use of chemicals. It was thought that it could help, but nobody had ever done it commercially. We just wanted to keep the soil on our potato farm in Moses Lake, Wash., from blowing away. The fact that we’ve been able to reduce our chemical use has been a really nice add-on.” He is the owner of Gies Farms, Inc. and High PerformanceSeeds.

Gies grew up on the 500-acre farm, located in the Columbia Basin of Grant County, Wash., that his family has cultivated since irrigation allowed his father to break the ground out of sagebrush. Tired of all the travel required for his job as a chemical consultant for a company involved in the production and export of oilseed, Gies bought the family farm in 1981.

“Things were starting to get bad in farming, and most of our neighbors were getting out of farming, and I did wonder from time to time whether I’d made the right decision,” recalled Gies. However, he found some rotations that were acceptable, bought more land, and figured out that growing seed wheat and beans was financially better. However, over the course of 40 years of intensive farming, soil productivity had declined due to wind erosion, low levels of organic material and compaction.

“Soil building was something we just had to do,” Gies said. “The question was how. I remembered studying green manures in a soils class at Washington State University and wondered if this could help, but after some reading, I found that all the field-related work was very old,” he explained.

Gies did find reports of laboratory work being done at Cornell University, where researchers were studying mustard green blends. Mustard produces glucosinolates, which break down as the plant decomposes into the volatile allyl isothiocyanate (biofumigant). Gies explained that this is the same reaction that makes your nose run when you take a bite of hot Chinese mustard, and it is also what makes radishes spicy hot.

Allyl isothiocyanate is similar to methyl isothiocyanate, which is the active ingredient in the commonly used chemical fumigant Metam-sodium. Growing mustard greens for the duration necessary for biofumigation provides excellent biomass, and therefore the process could potentially build soil while controlling common soil pests and diseases. The downside was that it had not been tried to any extent in the field.

“We thought it would be simple, but it has taken a lot of experimentation, and I still feel we’re at the horse and buggy stage,” said Gies. “It’s like Will Rogers said, ‘It’s not that we don’t know anything, it’s just that half of what we know isn’t true.’”

Gies started experimenting with his own blends of mustard green manures, inspired mainly by researchers in Italy. “They are so far ahead of us with this technology,” noted Gies. After about three years of trailing on his own and finding he was getting disease control equal to the chemically treated areas, Gies contacted Andy McGuire, an agricultural systems educator at the Washington State University Grant-Adams County Extension, to set up impartial trials.

The results showed that the areas of Gies’ farm treated with mustard green manures were achieving potato yields as high or higher than the areas fumigated with Metam-sodium. In addition, the green manure was reducing erosion, increasing water infiltration, and building disease-suppressive soils. There were significant savings from not using Metam-sodium, even after considering the cost of fertilizer for the mustard greens. Neighbors were paying attention, and now many have significant areas planted to mustard greens.

Some of what Gies saved from not using the fumigant has been used to improve current habitat and provide additional habitat for wildlife on the farm. “If we get a really hard winter, we don’t want to lose all the birds,” said Gies.

According to Gies, not all mustard greens are effective for biofumigation. He said, “To be a good biofumigant, glucosinolate needs to be present at high concentrations. The varieties from Italy, the Calientes, have been bred and selected for high levels of glucosinolate in leaves, and Nemat arugula has it in both leaves and roots. Caliente 61 has lower glucosinolate levels than Caliente 199, but the plants of Caliente 61 tolerate stress better, whereas Nemat/Caliente mixes are suitable for nematode control. I think the Italians were willing to work with me because we were already well-established vegetable seed producers.”

Talking about some success stories, Gies said, “We’ve had good luck with controlling soilborne pathogens in crops as different as eggplant, almond [and] zucchini, in addition to controlling nematodes in potatoes on many farms, including our own. However, it is not ideal for all situations.”

There are limitations, and using biofumigation in a production system where brassicas are a major cash crop is not advised due to possible issues with clubroot. Also, fitting the crop into the farm system without losing a cash crop can be difficult; this seems to be particularly true for potato producers in the Northeast. “There is a lot we still don’t know, and this isn’t an entirely predictable system yet, which puts some growers off,” said Gies.

He said that growers who want to try mustard greens must really have the desire, and advises that they start small with controls and not bet the farm on it. As for production advice, Gies said, “Make sure you have the right mustard for your need, the pH of the soil is at least 5.2, [and] the organic matter and fertilizer status is adequate.”

The establishment is no different than for other crops with small seeds; irrigation after seeding is important to grow a good stand. “Harvesting is probably where things often go wrong,” said Gies. “It must be chopped very fine, incorporated well into moist soil without delay, and then rolling to seal in the volatiles. All this needs to be accomplished as a continuum. For the small-scale grower/home gardener, this can be accomplished with a rotary mower, string trimmer or garden shredder, chopping as fine as possible, then rototill and seal immediately with plastic.”

Gies added, “Whether you’re a commercial grower or home gardener, don’t be too anxious to get your next crop planted. You should wait about two weeks before seeding or planting into treated soil – through with potato seed it seems that waiting isn’t so important.”

The use of Caliente mustards and Nemat arugula has really taken off, with growers and distributors in more than 20 countries. Gies is anxious to find some even better mustard varieties and will be looking at some new varieties on his farm this year.

“I spend so much time working with the mustards, with lots of traveling to research plots [and] consult[ing] with growers, extension staff and distributors throughout the world, that my sons now manage the 200 acres of potatoes,” noted Gies. “All the travel was the main reason I gave up the chemical consulting job, and here I am doing it again – though it is a bit different now, as the kids are not in grade school; it is the grandkids now,” he added.

“The fact that High-Performance Seeds is producing seeds that are part of a commercially accepted technique for disease control worldwide is sometimes a little mind-boggling for a farm boy from eastern Washington,” Gies said with a laugh.

Growers interested in more detailed information on mustard production for biofumigation may find these documents helpful:

The seed produced on Gies’ farm is sent out for milling, but all the blending, packaging and tagging is done back on the farm.

“The mustards are not certified organic. However, we use very few chemicals in the production, there are no GMOs, and they are private varieties. With the current rules for organic production, organic growers can use them, as the seed isn’t available organically,” explained Gies. “About 80 percent of our buyers are conventional growers, who use it as part of an IPM system, and 20 percent are organic growers. We don’t have a Web page, which surprises many people. It is word-of-mouth. We have distributors in Europe, Africa, South Africa, Australia and North America. They are well-informed and able to work closely with the growers, which I believe is very important,” said Gies. Seed suppliers who can provide the necessary technical advice include Siegers Seed (www.siegers.com), Rupp (www.ruppseeds.com), Simplot (www.simplot.com), Crop Production Services (www.cpsagu.com), and Wilbur-Ellis Co. (www.wilburellis.com).

“We and WSU have been able to do a lot with very little money; the researchers are scrambling for funds,” said Gies, who would like to work with the chemical companies and not against them to develop a combined approach for large-scale agricultural production. He believes there’s great potential in using mustard greens as part of an IPM program for many crops.

The author is an agricultural freelance writer and plant pathologist who lives in the Finger Lakes region of New York.