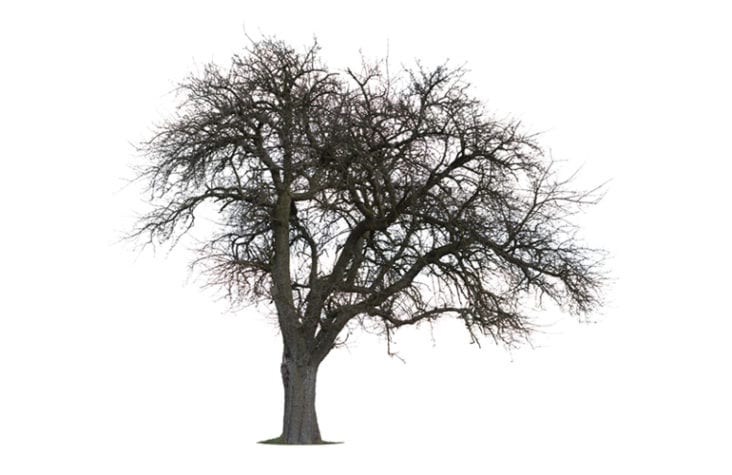 For four years now, researchers at Penn State University, led by plant pathologist Kari Peter, Ph.D., have been battling the sudden demise of young dwarf apple trees in high-density systems. The damage was first noticed when trees, planted in one block at the plant pathology research farm, began to die off rapidly. The decline and loss of these trees, which were planted in 2011 and consisted of several varieties on M9 rootstocks, remain a mystery to this day. Upon analyzing the trees for likely culprits and turning up empty-handed, Peter and her colleagues remain perplexed (https://extension.psu.edu/rapid-apple-decline-rad-or-sudden-apple-decline-sad).

Penn State trees are no longer the only ones dropping like flies. 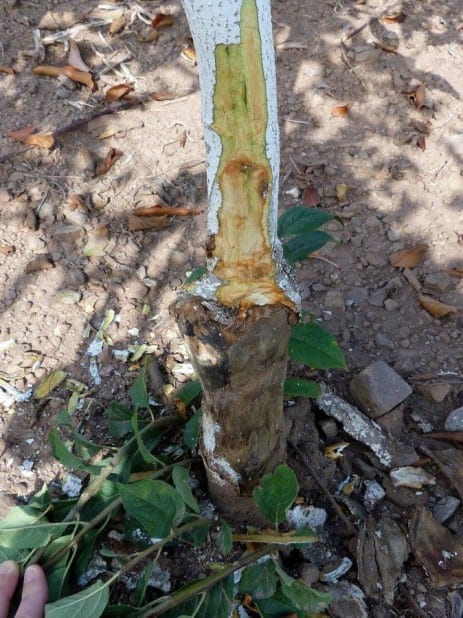 Unfortunately, folks in the Northeast, Canada and North Carolina began noticing that young dwarf trees planted in high-density orchards were dying with increased frequency and quite rapidly. The Pennsylvania Department of Agriculture, Cornell University, University of North Carolina and other entities have teamed up to solve the mystery of Rapid Apple Decline (RAD, a.k.a. Sudden Apple Decline, or SAD).

So far, the only trees affected are dwarf trees between 2 and 8 years of age. These trees have been sourced from numerous nurseries. There seems to be some connection to M9 rootstock, although other rootstocks also can be impacted. Peter reports that Fuji, Gala and Golden Delicious cultivars appear most susceptible. This might indicate some cultivar-rootstock combination that is triggering the RAD, but not enough is known to draw conclusions.

What has been observed does not point to any specific pathogen of concern and whereas abiotic factors may play a role, there is no obvious common denominator among the impacted trees. Pennsylvania researchers – along with those in New York and North Carolina – have recently asked apple growers to complete surveys describing their experiences with RAD, in an attempt to find answers to this mysterious syndrome.

“We’re still in data collection and surveying mode,” Peter said. “In addition, we’re in the process of applying for grants, in collaboration with several states, to be able to further understand what is going on. Money and personnel are the limiting factors right now for us.”

Trees – even those with a full and healthy load of fruit – quickly die from RAD. According to Peter, the graft union shows signs of necrosis. Severe bark shedding near the graft union is also a primary symptom. Cankers are also seen. Necrosis continues up the bark of the tree. Within two to three weeks, leaves turn yellow, then red and the tree dies.

There are few signals that anything is wrong with the tree prior to the sudden emergence of the symptoms. Trees collapse completely, despite the affected wood being solid and the roots being healthy and vigorous, producing many rootstock suckers. In any given block, trees with RAD are scattered throughout, with no pattern of emergence. Some trees in the block can remain healthy.

Researchers began looking at obvious reasons that young trees would suddenly face decline. Fire blight, tomato ringspot virus, phytophora rot and abiotic factors – such as drought stress, herbicide injury or winter injury – have all been likely suspects. But these have been ruled out as primary causative agents, or they do not seem to be pertinent to all RAD cases.

So far, testing for fire blight has been negative in all RAD trees. Tomato ringspot virus has been ruled out in many instances of RAD. Graft-transmittable latent viruses have been detected in some RAD trees, but not all.

Black stem borer (BSB), an ambrosia beetle, has been isolated at the graft union in some RAD trees. But what the connection, if any, may be remains unresolved, as not all RAD trees have borers. Two other types of ambrosia beetles have been associated with the vast majority of trees with RAD in North Carolina. Ambrosia beetles are attracted to the ethylene produced by stressed trees.

Researchers are studying the population of ambrosia beetles in North Carolina orchards. So far, they are closely associated with high-density orchards and have not been found in other orchard systems. High-density orchards that have experienced drought or other environmental stress seem to be at the greatest risk (https://plantpathology.ces.ncsu.edu/2017/06/the-ambrosia-beetle-invasion-of-western-nc-apple-orchards/). 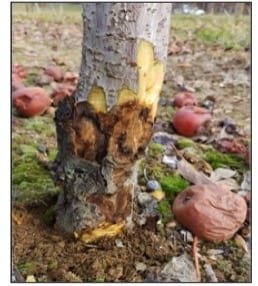 The best hypothesis thus far is that combined tree stressors are the causative agent in RAD, although the exact mechanism is not yet known. Peter, however, is not convinced that this is the main issue, as the original block of RAD apples at the research farm is interspersed with healthy Crimson Crisp cultivars, which are still thriving today. Additionally, RAD was seen here several years before the challenging environmental conditions of 2014 and 2015, which others have suggested may be a major contributing factor in RAD.

Because tree stress is believed to be a contributing factor in RAD, growers are advised to eliminate as many stressors as possible. High-density orchard systems are expensive investments, as David Rosenberger, professor emeritus, Cornell University’s Hudson Valley Lab, reminded growers in his presentation, “Sudden Apple Decline: Trunk-Related Problems in Apples.”

“Ultimately, good tree health is dependent on having healthy tree trunks,” Rosenberger said. “Growers who are investing up to $30,000 per acre in new plantings should be asking tough questions about rootstocks, virus contamination of bud wood, recommended planting depths, herbicide programs, irrigation systems and how to avoid fertility problems in dry years. Perhaps no one has all of the answers at this point, but we can’t expect much progress if no one is thinking about how to improve the key structures (apple trunks) that support all apple production systems.”

Peter advises growers to protect trees from winter injury via white paint on the trunks or using white tree guards. Irrigation is recommended, as well as proper fertility. Using alternative rootstocks to the M9 could afford protection, as Geneva rootstocks do not seem to be as susceptible to RAD. Other diseases may be playing some role in the syndrome and viruses or pathogens – known entities or some as yet unidentified – may also be contributing to RAD.