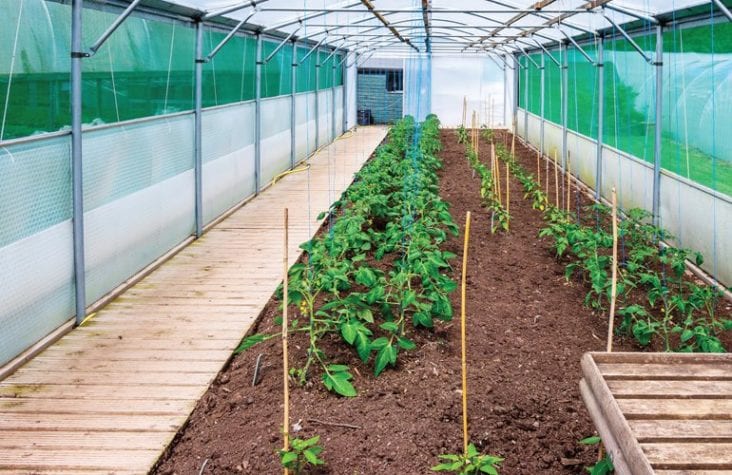 Raising resilient, high-quality marketable greenhouse crops requires the right mix of nutrients. The variety of commercially available fertilizers allows producers to provide a proper balanced level of minerals and nutrients to produce healthy plants. Incorporating silicon into your fertilizer program can be especially important for plants grown in soil-less substrates as silicon is naturally found in soil.

Addition of potassium silicate (Silicon, Si) to the fertilizer program can reduce root rot and improve the strength and post-harvest life of plants. It has also been proven to decrease black spot occurrence in nursery grown shrub roses, reduce pythium occurrence in poinsettia and slow leaf miner activity in chrysanthemum.

“Silicon is the second most abundant element in the Earth’s crust, and is found complexed with oxygen and other elements,” said Wendy L. Zellner, Ph.D., research plant physiologist in the Greenhouse Production Research Group with USDA Agriculture Research Service.

The element is found in many different forms. Silica (SiO2) is the form found in quartz and glass, is tightly structured and hard to break down into smaller subunits. Amorphous silica (also SiO2) are less organized silica structures and include plant phytoliths that break down more easily into smaller units.

“Silicic acid [Si(OH)4 or H4SiO4] is the plant-available form of silicon and is found in soil solutions at concentrations between 0.1-0.8 mM,” she added.

Most importantly, silicon should not be confused with silicone. “Silicone is a polymer of Si, C, H, and O. It has a rubber-like consistency and is commonly used in cookware, sealants, adhesives and lubricants,” Mattson said.

The American Association of Plant Food Control Officials recognizes silicon as a beneficial element for greenhouse crops because it increases a plant’s tolerance to abiotic and biotic stress. “This simply means that silicon will not cure a plant of disease or stress, but it will help the plant cope with the stress more efficiently,” Zellner said.

Silicon is an important plant nutrient that when supplied at adequate levels allows the plant to perform optimally. “Some research has shown in certain greenhouse crops that silicon increases stem diameter, reduces time-to-flower, and produces an overall better crop,” she said.

She cautions that the studies to date observed differences between silicon-deprived and silicon-fed plants. “In a typical greenhouse setting, there are a number of ‘contamination’ sources of silicon, including irrigation water, fertilizers, media (especially peat), and pesticides,” she said.

If a cropping system already has a significant amount of background silicon, the benefits of additional silicon might not be as drastic as shown in research findings, especially if the plants encounter little stress during their production.

However, there may be further benefit to treatment of plants with silicon prior to a known stress event, such as shipping. “We are starting to collect data that suggest silicon is needed at the time of a stress event in order to have its benefits,” she noted, “this means the more available silicon at the time of a stress will result in a better tolerance of that plant to the stress.”

Mattson suggests conducting small test runs before supplementing crops with silicon. “Reports of damage from high application rates are rare. One researcher reported that in sunflower high rates of silicon led to stunted plants with deformed flowers,” he added.

Using silicon in your greenhouse crops

Application rates are provided by each manufacturer. “From our data, we have found that as little as 30 ppm (1.0 mM) silicon in the form of potassium silicate is sufficient in inducing defense responses to viral infection in tobacco,” she said.

A conservative range of application is between 30 and 70 ppm silicon. The plant variety, silicon source, and media (among many other factors) are contributing factors in determining where within that range one should aim for their silicon fertilization application. Research also indicates that rates of silicic acid concentrations exceeding 75 ppm should be avoided. “Once you’ve reached saturation of the media solution, the amount of available Si drastically decreases. Less is definitely more,” she said.

Silicon can also be applied as a foliar spray. “An application of 100 ppm silicon is sometimes used in poinsettia production to prevent bract edge burn.” Mattson said. “The benefit is only to the leaves and bracts, and no reports exist of silicon being transported from the leaf surface to stems or roots.”

Mixing silicon into the substrate prior to planting is also an efficient method and acceptable for short-term crops. “Little research has been conducted to determine how long pre-incorporated silicon will persist in various substrates,” he added.

Liquid potassium-silicate is also available for use in conjunction with hydroponics systems or through irrigation systems, but it cannot be mixed in the same stock tank as a standard fertilizer solution. “It should be the second injector in series and applied as a once weekly drench when not fertilizing,” he said.

Silicon is not a “miracle cure” for every plant stress, but it does offer several benefits as described here. “It will likely become an important tool in helping growers reduce shrink during production and in the retail environment,” Mattson concluded.