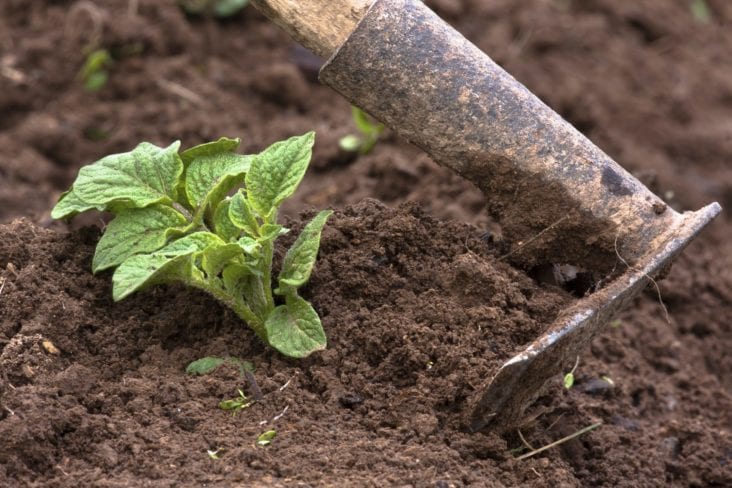 When most consumers think about potatoes, they immediately think, “Idaho, home of the potato!” There is truth to the state’s catchy slogan – Idaho farmers, on average, plant one-third of a million acres of potatoes every year, according to the Idaho Farm Bureau. Potato Growing

Read about: What’s Right for Your Farm: Fungicides or Herbicides?

The 320,000 acres of potatoes, mostly grown in the Snake River Plain, lead the nation. Idaho will bring in $550 to $700 million per year from its potato crops. Yet, Idaho’s production is only one part of the land set aside to feed a nation that ranks potato chips and tater tots in the Top 50 of their favorite foods. Add to that an insatiable demand for varied uses for potatoes such as mashed or baked, potato salad and French fries.

Washington is a close second in potato production, with Oregon, Wisconsin, Colorado and North Dakota jockeying for third place. The north-central region of the United States primarily grows redskin potatoes. Other major producing states include Maine, which grows white potatoes, and Pennsylvania, which grows chipping potatoes.

There are actually more than 100 varieties grown in the United States. With all the options, it can be difficult to decide what variety is the best to grow on your farm. Each microclimate has variations in planting, cultural and harvesting practices.

Idaho produces the classic, large Idaho potato for baking, making it the perfect place to grow and harvest tubers sold in sacks ranging from 5 to 15 pounds. If the market is interested in producing redskin potatoes, which consumers usually use in roasts and salads, then the central part of the United States is the place to be.

Maine’s white potatoes are usually small to medium in size with a white or tan skin and a white flesh. Last but not least, Pennsylvania, the snack food state, grows the potatoes that will eventually be made into potato chips. While they all grow potatoes, each growing region has nuances in production as well.

Read more: Selling at the farmstand 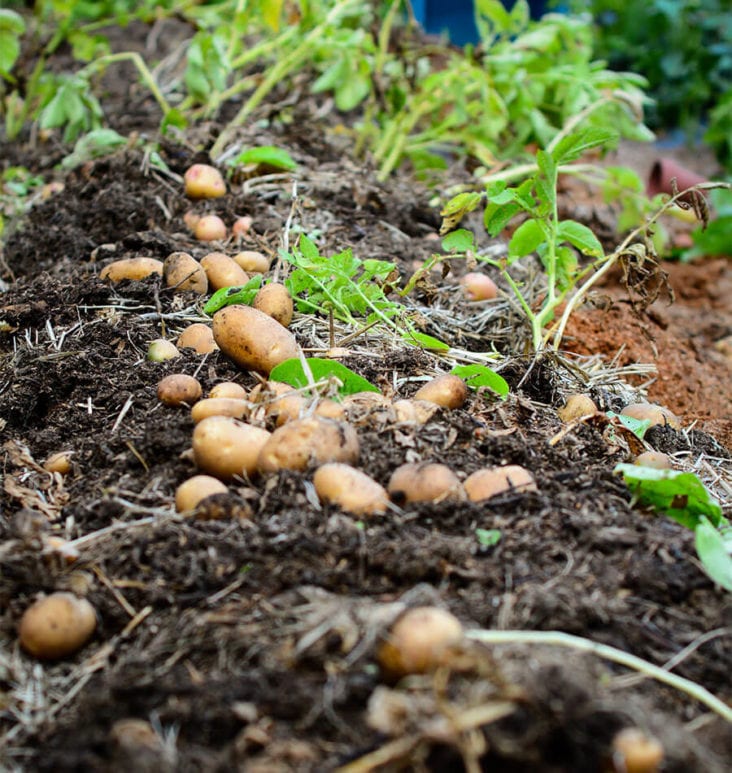 Even before the planting of seed potatoes, the soil must be in ideal condition for the potatoes to grow and mature.

The soil should be tilled to a minimum 12 to 16 inches deep and, in most situations, even deeper. The seedbed should be free of rocks or clay clumps, which can make the growing process harder, according to Pieter Hollebrandse, potato technical manager at McCain Foods, and Flip Steyn, potato breeder at the Agricultural Research Council in South Africa.

Steep slopes should also be avoided if possible, along with spots that have a history of becoming water logged.

Crop residue should be finely chopped. Hollebrandse said that “if a lot of large residue is left from the previous crop, such as a field rotated out of corn, chop plant debris as fine as economically feasible, spread the plant residue evenly and incorporate into the soil as soon as possible after harvest.” This gives the previous crop residue plenty of time to decompose before planting potatoes.

Large chunks of plant debris can cause the same kinds of deformed tubers that a stone would cause. On top of that, the field will lack the full benefit of the nutritional value of the previous green manure.

There is no single standard tillage system used for the preparation of potato fields. The variation in acceptable tillage practices is a result of the wide range of soil types from sand to clay, rotations, time available and tillage implements available.

Regardless of the tillage system used, preparation of the soil bed must meet several criteria. Work soil under relatively dry soil conditions. Deep chiseling will remove any plow pan or other compaction down to 20 inches. Leave level, firm soil. Rollers and leveling boards attached to implements are effective. Field preparation should be performed in as few operations as possible, again to avoid compaction and assure as fluffy a seedbed as possible.

Good tillage will aid the lifting process and avoid bringing up clods or stones from the deeper soil layers.

Potatoes should be planted about two weeks after the region’s frost-free date to ensure the potatoes will not freeze.

Once properly planted, potatoes need proper nutrition so the stems thicken and form as many as 20 tubers close to the soil surface. The number of tubers that actually reach maturity depends on available moisture and soil nutrients, according to agronomists at The International Potato Center.

Irrigate potatoes regularly and keep the soil profile moist. Though the potato plant is mostly shallow-rooted, some roots do go deep for water. It is critical to make sure that potatoes are irrigated deep enough so water reaches at least 10 inches below the surface. Potatoes obtain 57 percent of their water from the top foot of soil, 24 percent from the second foot of soil and as much as 13 percent from the third foot of soil.

Irrigation technique is important. It may take some extra time to get the saturation zone that deep, but this extra attention to detail will pay off at harvest when the crop is big and healthy, thanks to proper watering and nutrition.

Many producers spoon-feed nutrients with the irrigation water, making placement of nitrogen and a good soaking through the soil profile keys to success.

Even with proper nutrition and planting, potatoes are notoriously prone to diseases and pests.

Frequent scouting of fields is the best way to assure prompt identification of problems. Disease scouts should be in the fields at least weekly, and more frequently, if economically possible.

When faced with either bacterial ring rot, the common scab or bacterial soft rot, action must be taken at once to save the crop.

If bacterial ring rot is present, leaves will be yellow in spots and eventually will turn brown, giving the appearance of a burned leaf, according to University of California Agriculture (UC-Agriculture).

This disease’s host typically is not the soil but, in fact, is more commonly the farm’s own handling machinery. Ring rot can live for long periods of time on equipment, according to UC-Agriculture.

In order to defeat this menacing disease, UC-Agriculture recommends using only certified seed tubers, rotating out of potatoes at least for one year and following strict sanitation procedures when cutting seed.

Periodically disinfect cutting tools in a 1-percent solution of calcium hypochlorite. Use of whole-drop seed will minimize the spread of bacterial ring rot, UC-Agriculture said. These practices will keep damage from ring rot to a minimum.

Bacterial soft rot is the next most likely disease to invade a potato crop. Soft rot can be identified by rotted tissues that are wet, cream to tan in color and soft. Soft rot begins on the tuber surface and progresses inward. Infected tissues are sharply delineated from healthy tissue by dark brown or black margins.

Shallow necrotic spots on the tubers result from infection through lenticels. Rotting tissue is usually odorless in the early stages of decay, but develops a foul odor as secondary organisms invade infected tissue.

Soft rot will also infect wounded stems and roots, according to UC-Agriculture. This disease thrives in habitats that are warm and have plenty of moisture.

The front-line of defense against soft rot, UC-Agriculture has found, is using high-quality seed.

Split applications of water-soluble calcium applied at 100 to 200 pounds per acre during bulking have been shown to reduce infection and severity of soft rot.

Specific temperature recommendations vary depending on the level of decay evident at packing and the market for the potatoes – that is, whether the potatoes are destined for processing, fresh market or long-term storage.

The common scab can be described as lesions ranging in size from a quarter-inch to a half-inch in diameter. These scabs are widely distributed and persist in soil on decaying organic matter. Inoculum is also carried on infected seed tubers. The fungus can also persist in noncomposted manure from animals that have fed on infected tubers, according to UC-Agriculture.

Tubers become susceptible to infection when they start to form. Scab lesions expand as the infected tubers grow.

Disease severity is almost always increased in fields where there is back-to-back or continuous cropping of potatoes. Thus, there is need to rotate out of potatoes annually. Keeping a field out of potatoes for several years will improve scab prevention.

Mature tubers with well-developed skins are usually not susceptible to scab.

If the potatoes are properly planted and cared for and survive disease, harvest season will be a time of celebration. But before the party starts, be sure proper harvesting techniques are practiced.

One widely accepted way to measure potato quality is through specific gravity. Agronomists at the University of Idaho noted: “Specific gravity of potatoes plays a key role in the final product. Specific gravity is an important determinant of harvest quality. In practice, this attribute of a tuber is an indicator of maturation that the industry uses as a reference to judge fry quality, baking characteristics and storability.”

Specific gravity measurements reflect environmental factors and cultural management decisions made during the production season. The University of Idaho recommends choosing a random sample of tubers picked while harvesting. Get a representative sample from different locations. This ensures that all areas of the farm have been covered.

An accepted sample of tubers is in the 10 to 15 pound range.

Although specific gravity is an important metric, the actual harvesting of potatoes will be the make-or-break factor in delivering a quality product.

UC-Agriculture offers producers a list of time-tested do’s and don’ts of potato harvesting that will make the process easy and help increase yield.

For starters, do stop irrigation two to three weeks before harvest. If frost does not kill vines or if rainfall is not a factor, this allows a slow decline of the vines. It hastens and enhances skin set. With enhanced skin set, the taste will also likely be enhanced.

Harvesting before full maturity is a profitable procedure only when a premium price is paid for smaller, immature potatoes. If the potatoes are not being sold to a premium market, premature harvesting should be avoided at all costs.

Whether chemicals, frost or natural senescence has caused the death of vines, it is worthwhile to eliminate the vines from the top of the beds. This can be accomplished by flaming or by using mechanical shredders or beaters.

Eliminate vines before digging because, according to UC-Agriculture, vines can cause mechanical difficulties in the digging operation. They can also harbor insects and diseases, which, if not removed, will come in contact with the tubers during harvest.