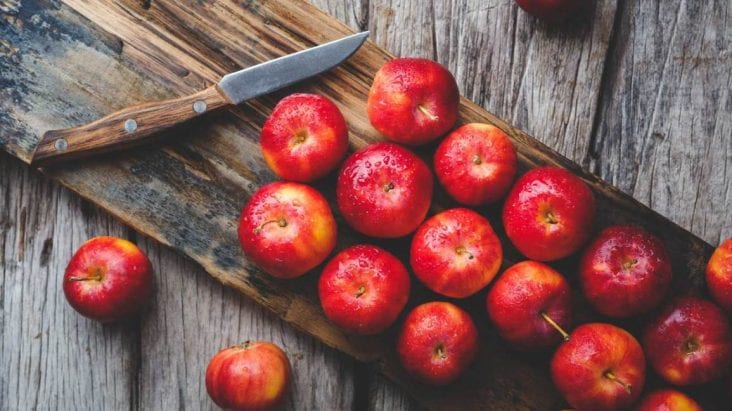 Happiness to me is biting into an apple. It’s true about nature’s candy – an apple DOES keep the doctor away. And at my age, the fewer doctor visits (aside from the scheduled times), the better.

So as an apple fan, I was pleased to read the late-August forecast from the U.S. Apple Association. The group estimated that more than 234 million bushels would come to harvest for the fall season. The number came in below the U.S. Department of Agriculture’s estimate of approximately 242 million bushels.

In the great New England states – home of the Growing Magazine headquarters – the apple crops are expected to boom. The USDA is expecting around 170 million pounds of the fruit harvest, while the U.S. Apple Association predicts a 14 percent boost in the harvest for the region.

Although Mother Nature spared the New England region, for the most part, the Pacific Northwest felt some of her mainly drought-related effects. Washington, the largest apple producer state, is expected to have a 10 percent drop in the harvest with 125 million boxes (40 pounds each). Last year, the Evergreen State enjoyed a record crop of 140 million boxes.

Many other states such as Virginia, Michigan and my home state of Ohio are anticipating an abundant crop this fall. The Virginia Department of Agriculture went as far as to label their crop “excellent,” as it expects production to reach 180 million pounds.

Growers – definitely in the Midwest and Northeast regions – are benefiting from early summer, more-than-average rainfall followed by a rise in temperatures, thus spiking the sweetness of crop. That’s good news for us apple pickers!

Speaking of apples, our Orchard Management column discusses some fall maintenance ideas to implement in your apple orchard Despite my bias toward the apple, we have an October issue that shines a light on fruits and vegetables of many types from cherries and apricots to the unusual, such as jicama and purple sweet potatoes as well as the growers who successfully harvest those crops.

Thank you for opening the pages of Growing and may your harvest be plentiful. Cheers!