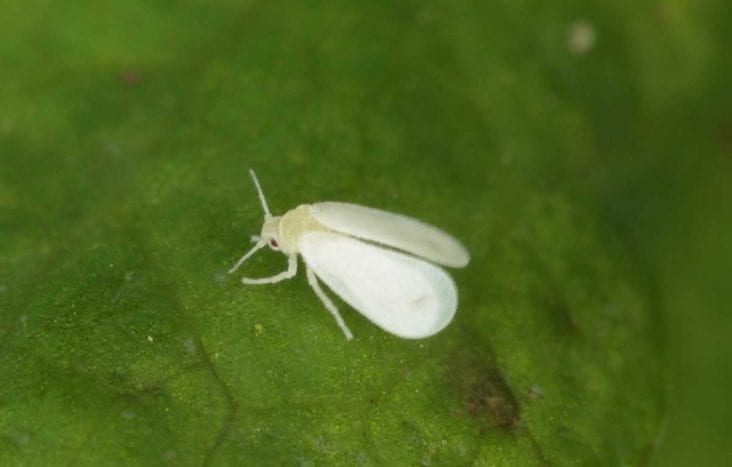 When you hear of the whitefly, do you imagine that it sounds like a gnat flying around your head and is just an overall nuisance? Actually, they’re not at all like gnats, except for the nuisance factor to growers.

Whiteflies suck on plant leaves, according to Hannah Burrack, an Extension entomologist at North Carolina State University, and whiteflies excrete honeydew sugars on leaves. In high numbers, she said the sugars can become sticky and may encourage the growth of blackish mold.

In a long-standing paper by Virginia Tech scientists, the whitefly damage can look yellowish, and the feeding may stunt the plant’s growth. The damage also may reduce yield.

Joey Williamson, a horticulture Extension agent with Clemson University, said that whitefly damage can occur directly and indirectly. The direct damage is from feeding, and both the nymph and adult can cause this damage. Heavy damage may cause the plant leaves to wilt. On the other hand, indirect damage occurs when whiteflies act as carriers. They can carry and spread viral diseases, he said.

These pests can promote other diseases. For instance, Burrack suggested they can use fruit such as strawberries as hosts and can vector diseases such as strawberry pallidosis-associated virus or beet pseudo-yellows virus. Symptoms of these diseases involve reddening of mature leaves, stunting of the plant roots, and reduction of growth and yield.

Williamson said that whiteflies feed on many different plants. Some hosts may include tomatoes, squash, cucumbers, melons, and poinsettias.

The Virginia Tech scientists advised removal of weeds from the greenhouse since they can harbor whiteflies and other insects.

Burrack said whiteflies are about 1 to 2 millimeters long and feed on mostly the underside of the plant’s leaves.

The adult whitefly is white in color and has a waxy coating on the rear part of its body, Burrack said. The nymph has a round body and has a waxy filament coming from its body.

Williamson said that the head of the Silverleaf whitefly is broad at its antennae but narrow near its mouthparts.

The wings of adult greenhouse whiteflies lay flat over the stomach, according to the Virginia Tech scientists. Pupae are recognized by their numerous fringes on their sides and may seem block-shaped. The pupae’s appearance has a tapered look at one end, and one end is sharper than the other. On the other hand, the wings of Silverleaf whitefly adults rest in a roof-like position.

The Silverleaf whitefly’s wings rest at about a 45-degree angle, making them appear more slender than other whitefly types.

Virginia Tech scientists indicated that whiteflies, while white in color, can have pale yellow bodies. In addition, the paper noted that whiteflies are close relatives to aphids, cicadas, hoopers, mealybugs, and scales. Growers can identify whiteflies better in the pupal stage.

The whitefly eggs may require from 10 to 12 days to hatch. The life cycle from egg to adult can take from 30 to 40 days. The beginning instars can be active while the later instars are more sedentary.

Nymph eggs are white to light beige in color, according to Williamson, and once they hatch, they can look glassy to opaque yellow. The nymph has a flat body and crawls around until it grows mouthparts. Adults can lay from 80 to 100 eggs. The pupa is darker in color, having a beige-yellow and opaque appearance.

To better manage whiteflies, Burrack advised removal of host crops before planting another crop. This helps to reduce whitefly populations.

Burrack said chemical controls such as insecticides can work; however, she advised growers to monitor the density of whitefly populations.

The scientists at Virginia strongly recommended quickly limiting high populations of whiteflies since they are more difficult to control in higher numbers. Growers can completely cover the plant for effective suppression and use a systemic or a product that offers a long residual.

Burrack recommended yellow sticky card traps to help monitor whiteflies, especially in the greenhouse, and counting them on field plants to get an idea of numbers per plant and per acre.

Virginia Tech scientists advised the placement of the sticky cards near doors and vents. To assist with counting and seeing whiteflies, all growers need to do is to tap plants so the pests will move. Additionally, look underneath the leaves for any pupae and/or adults. Also, growers can spot the yellowing or stunting of plants to alert them if whiteflies are present.

Growers who want to control whiteflies organically can use oils and soaps; however, Burrack said they should also follow good cultural practices and biological control. The Virginia Tech scientists noted that these oils and soaps offer control in low density populations, but they don’t recommend them in the greenhouse if beneficial insects are not present. Also, growth regulators can help but are not recommended for controlling adult whiteflies, and growers must apply these growth regulators more often for adequate control.