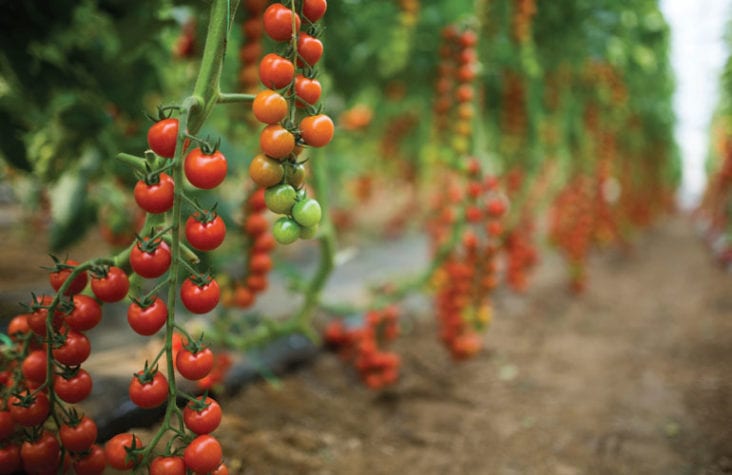 Locally grown produce presents the largest opportunity for growers nationwide. In July 2015, the USDA estimated that local food sales in the United States have nearly doubled in recent years, jumping from $5 billion in 2008 to $11.7 billion in 2014

Read about: Using Herbicides Within the Vegetation-Free Strip Method

“Consumers are asking for locally grown produce,” said Peter Konjoian of Konjoian’s Horticulture Education Services in Massachusetts. “Why not be the grower that provides it to them?”

Greenhouse growers are well positioned to raise indoor vegetable crops. They understand how to grow plants and, in many cases, they raised vegetable crops in the field at one time.

“This isn’t a new venture for our family. Instead, we consider it coming full circle. My grandfather started as a farmer before the greenhouses were built in the 1960s. We grew flowers for 50 years, and now we’re growing vegetables again,” Konjoian said.

As with flower crops, there will be large-scale growers that are impossible to compete against. Konjoian said there is, however, opportunity for small- and medium-sized greenhouse operations to satisfy local demand while also adding a revenue stream to the greenhouse operation.

“A plant is a plant. The principles of production are nearly identical,” he said.

While production strategies are similar, there are a few differences in crop management to consider before jumping in with both feet.

Careful cultivar selection may be most important.

Seed companies are now beginning to develop and sell varieties described as miniature, baby and/or quick crops. Radishes, lettuces, carrots and pak choi are among the most popular crops greenhouse growers are experimenting with.

While you look for cultivars with shallower root systems and quick growing cycles, you may need to look for new growing cells. Traditional plug trays will not work for carrots, but a deeper plug cell used in the nursery industry may make the perfect host for the crop.

When planning, it’s prudent to research your local marketplace to understand what crops customers are seeking. Research the average age, income, country of origin and household size in that area.

This information can be beneficial for multiple reasons. For example, women over age 40 eat the most spinach, and presumably kale, and teenage girls eat the least. Per capita, spinach consumption is highest among those of Asian descent.

Examine what the demographics of your area tell you about the profit potential for a greenhouse used to grow greens (or perhaps used for growing hard-to-find ethnic vegetables). 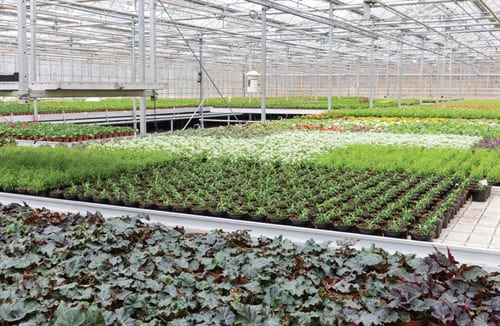 Overhead irrigation systems are the most common watering systems used in greenhouse operations. This setup works well for annuals, but is not ideal for vegetable crops. Greenhouse operations that use ebb and flow benches rather than overhead systems are well positioned to transition growing space from flowers to edible plants.

Before investing in a large system, purchase several small-scale components and experiment with subsurface watering techniques.

“Changing your mindset about watering is perhaps the biggest change,” he said. “Subirrigation is crucial for disease prevention.”

Ornamental growers understand the importance of cleanliness and sanitation to prevent the spread of disease.

“Regardless of how good you are/were on the ornamental side; you need to be more diligent,” Konjoian said.

Food crops are subject to regulations outlined in the FDA Food Safety Modernization Act (FSMA), which was first signed into law in 2011. It includes significant reforms intended to ensure the U.S. food supply is safe. The law shifts the focus from responding to contamination to preventing it.

Regulations may vary depending on the specific consumer you are serving. For example, selling to major supermarkets requires certification. The certification process is strict and there are a lot of processes, laws and procedures that have to be put in place to avoid any kind of potential contamination and food safety concerns. This includes implementing a recall process and being able to react to anything that does happen.

Greenhouses geographically located in areas with extended daylight are naturally suited to year-round vegetable crops. Growers in the Northeast, Midwest and other areas with fewer days of sunlight will need supplemental lighting to grow crops year round. High-intensity supplemental lighting can increase photosynthesis and plant quality of crops during periods of dark weather. Universities and manufacturers are working to develop LED lighting systems to support year-round growing, while conserving energy and managing electricity costs.

The question may still boil down to “Is this profitable?”

To determine if radishes could be a profitable crop for his greenhouse, Konjoian visited local grocery stores and purchased radishes. Using the price paid, he established a set of price points consumers are already paying. Then, he performed a cost analysis to determine if he could earn the margins needed to be profitable.

“There is plenty of room for margin with the current pricing structure,” he said.

While there is opportunity for profit, growing indoor vegetable crops requires thinking outside of the box. “There won’t be a demand for an acre of greenhouse production space devoted just to radish,” he said. “However, compared with specialty ornamental crops like poinsettias, which only have demand one day a year, a demand for radishes exists every single day.”

There is also a shift in thinking about the finished product. With ornamentals, you’re finishing the plants to their pot size and shipping them at their peak, whereas with vegetables you’re growing them for quite a few months while harvesting the fruit. It’s a different mentality in the way you treat the plants and the labor needed to harvest the vegetables.

Konjoian said the real potential for greenhouse growers and vegetable crops is the opportunity to interact with consumers. Together, customers and growers can identify crops that will serve the local market well while providing strong profit margins.

“Ultimately, the sky is the limit,” he said.