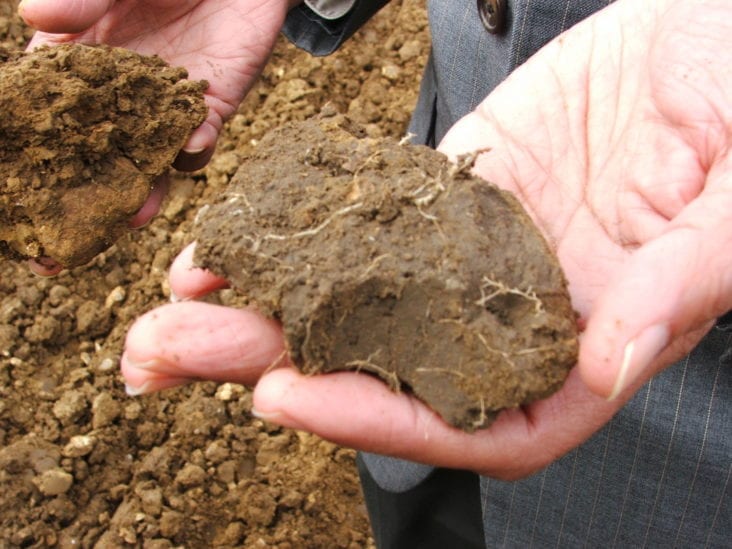 With the Connecticut River meandering through it, the Pioneer Valley of Massachusetts is prized for its rich soils. Here, Community Supported Agriculture farms abound, and local farmers sell their goods at farm stands, vibrant farmers markets, and to local grocers and national chains. Tomatoes of all kinds are a summer staple, and rich varieties of squash decorate many a table from August through December. Yet all is not perfect in this idyllic New England community. “Agriculture is becoming a victim of its success,” said Massachusetts’ (MA) Natural Resources Conservation Service State Conservationist Christine Clarke. “There is incredible pressure on farmers to find land to produce the crops demanded by the market.”  Soil

Read about: Transitioning from Flowers to Food

As demands for local food plus an outbreak of Phytophthora capsici in 2015 forced some farmers to move to steep hay fields to produce their crops, Clarke grew concerned about the environmental impact. “When farmers go to fresh soil, they’re often plowing down hay fields, which are a carbon sink for the reduction of greenhouse gasses,” she said.

P. capsici, a highly infectious water mold that is lethal to certain vegetable crops including squash, pumpkins, cucumbers, potatoes, tomatoes and peppers, infested one field after another. Crops were destroyed, and farmers watched profits dissolve. As if that wasn’t bad enough, farmers suddenly had the added expense of renting new crop land that had not been infected by the mold.

“The destruction is pretty easy to see,” reported Tom Akin, the NRCS-MA state resource conservationist who responded to the farmers in crisis. “The trail of dead plants usually follows the flow path of moisture in the soil. Where soil ponds, the impact is the worst.”

One way to mitigate the effects of P. capsici is to improve soil health. Akin said anything a farmer does to reduce soil compaction and improve drainage can help. Could the outbreak actually have been prevented with better soil management practices?

Much ado about soil

The USDA-NRCS declared soil health the No. 1 concern in 2015. The United Nations Food & Agriculture Organization (FAO) declared 2015, “International Year Of Soils.” Why all the fuss? In years past, scientists viewed soil as an inert substrate that had no significant biological properties of its own. From the 1930s until recently, common agricultural practice held that this substrate could sprout life, provided it had the right inputs.

After the Dust Bowl devastated the midwestern area of the United States, known as the “bread basket,” the Soil Conservation Service was established to mitigate the effects of the Dust Bowl and prevent a similar event from happening again. Some very important land management techniques introduced in the Dust Bowl era designed to stem erosion, such as contour farming and crop rotation, fell out of favor as market demand grew. Monoculture farming (aka monocropping) and the intensive use of chemical fertilizers and pesticides put more pressure on the soil, and in particular placed more stress on the biological components of the soil. Although it took almost half a century for the scientific and agricultural community to recognize the damage done to soil health, and another two decades to spread the word, we are beginning to understand that soil is not a lifeless substrate.

Today, the USDA-NRCS is promoting soil health as a means to foster a thriving agroeconomy.

“We’re looking at soil as a living ecosystem,” said Jimmy Bramblett, Wisconsin state conservationist with USDA-NRCS, “and trying to maximize the chemical, physical and biological properties of any type of soil out there.”

Most current nutrient management programs focus on the chemistry of that equation. Bramblett said that adding the biology and the structure to the equation enables farmers to enhance the soil and make it more resilient.

Engaging in practices that promote soil health benefits growers by saving on labor, fertilizer, water and pesticides. Creating healthy, resilient soil is simple in some regards, yet complicated by the diversity of ecosystems in every region. California alone has over 2,500 different types of soils, and more than 300 crops. In Wisconsin’s soils, increasing organic matter by just 1 percent results in increased water holding capacity on the average soil in the state by about 27,000 gallons. That’s great for Wisconsin, but a 1 percent increase in organic matter may not be enough in other growing areas. Idaho has two very distinct climate areas. The Snake River Plain receives 12 inches or less of rainfall per year, while areas of southern Idaho are basically temperate rainforest, and Florida is warm and wet. How do you know what your soil needs?

California’s state conservationist Carlos Suarez depends on the information from soil surveys NRCS scientists conduct in order to help producers. “Given the producer’s type of soil, and the desired crop, what type of practices do they need to use to grow that crop?” Suarez asked. “Soil health is so critical. Healthy soil retains moisture, which enables crops to grow.”

Healthy soil also promotes plant health by, among other things, preventing plant pathogens and diseases from taking hold. Could the outbreak of P. capsici in Massachusetts’ Pioneer Valley have been prevented? According to Akin, the disease is preventable yet difficult to manage. The former agronomist said that’s where the importance of managing for soil health comes in. Next month: Managing for Soil Health.