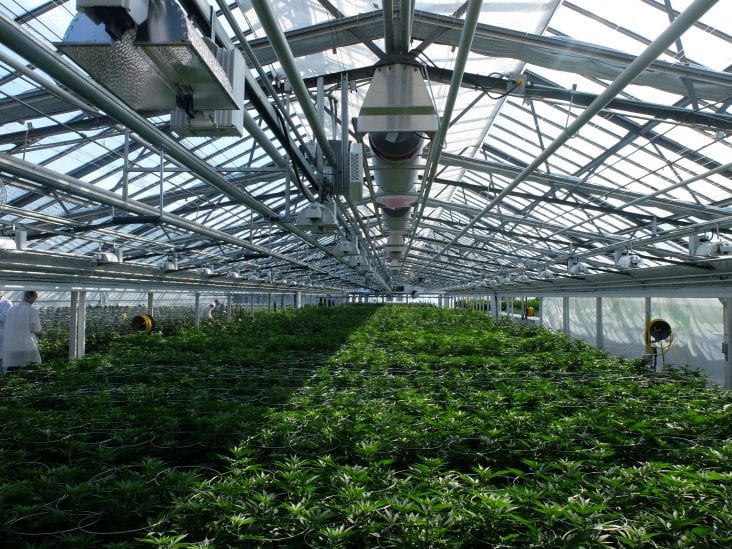 Baby, it’s cold outside! Even St. Nick is shivering. He’s also probably stirring about getting ready for the big night in late December.

Do you know who else is moving? It’s greenhouse growers who are thinking about a winter crop or another year of greenhouse-grown produce. They’re probably also planning how they will control weeds in their greenhouses. You don’t think greenhouses are free of weeds, do you? In fact, they can grow inside where it’s warm as well as outside in the field.

Control weeds, disease and insects, and you are likely to produce quality vegetables in the greenhouse. If you don’t, those weeds will compete with seedlings for light, nutrients, water, and space, Stanley Culpepper, an Extension weed scientist with the University of Georgia, said.

Culpepper also said that weeds can block sprays from landing on the transplant foliage, thus reducing the chemical’s effectiveness.

Joe Neal, an Extension weed specialist at North Carolina State University, said that weeds such as creeping woodsorrel, flexuous bittercress and spotted spurge can cause persistent problems in a greenhouse, as well as annual and perennial grasses such as annual bluegrass and bermudagrass.

Besides their presence, weeds can invite insects such as thrips, whitefly, nematodes, mites, slugs, and snails. They also can harbor disease such as impatiens necrotic spot virus and tomato spotted wilt virus.

Neal said growers should approach weed control with an effective weed management plan that should include prevention of weeds and sanitation of the structure. First, make sure the greenhouse inside is sterile. Also, use trays, pots, benches, and equipment that have been sanitized. And don’t forget to sterilize the floor, which should be concrete.

Jeffrey Derr, an Extension weed scientist with Virginia Tech, also advised to remove weeds from plugs or liners, and use only trays free of weed seed or ones that have been sterilized by steam or some other means. When steaming, sterilize for 30 minutes with a solution that is 180 degrees Fahrenheit. Even with this method, he warned growers that not all weed seeds will be killed. Additionally, do not let weeds flower inside and outside the greenhouse as this will make matters worse. Let the greenhouse dry out good between crops. Starting with an unsanitized growing environment is an act of disaster.

In addition, remove any weeds inside and bordering outside of the greenhouse, Neal advised. He suggested preventing grass and weed seeds as well as insects from entering the greenhouse through vents or other openings.

Inside the greenhouse, growers may see some weeds and think they won’t bother transplants, but Culpepper recommended removing them, noting that some weed species can eject seeds up to 15 feet if the seed capsule is bumped or dries out.

Culpepper said growers will especially see wind-blown seeds during the fall, a time when weeds mature and produce their seeds. These seeds may not germinate right away but may when growers transport them to the field. These weeds can germinate close to transplants, and, if not controlled, can overshadow the transplant. However, control doesn’t come easy, as many growers must pull the weeds by hand. For control of wind-blown seeds, install screens or some other tools to stop the seeds from getting on the transplants, in pots, on benches or on the walls of the greenhouse.

Even the most careful grower will still find weeds have crept up in the greenhouse. In this instance, Culpepper said they should remove weeds by hand, let weeds dry up, fumigate only if necessary or treat with a postemergence herbicide. Except for fumigation, each removal technique used won’t prevent seeds from re-establishing themselves. For pesky weeds, re-clean the growing environment by removing the soil or covering it with mulch or weed block fabrics to limit weed growth.

Culpepper said growers must wait a certain time after fumigating before re-entering the greenhouse because the soil must aerate properly. The length of the waiting period depends on whether growers cover the soil or not. A suggested waiting period is 10 to 21 days if the soil has been covered. Soils not covered take less time to re-enter the greenhouse. Growers should let all fumigant gases escape before planting.

Neal suggested that the advantage of glyphosate is that it is systemic and has lower toxicity than some other herbicides. A systemic herbicide is absorbed by the plant’s roots and moves on up the plant.

On the downside, he said herbicides in the greenhouse can cause vapors that accumulate and will become trapped inside. Besides possible exposure to workers, the results are injuries to transplants. Neal advised to only use glyphosate in empty greenhouses, or growers can block off ventilation and any circulation fans so the stillness can reduce chemical drift. If drift does occur, wait six hours, and then wash down equipment and structures inside the greenhouse.

Before using any chemical, Neal advised growers to read the label and double-check to be sure it is registered for use in the greenhouse.