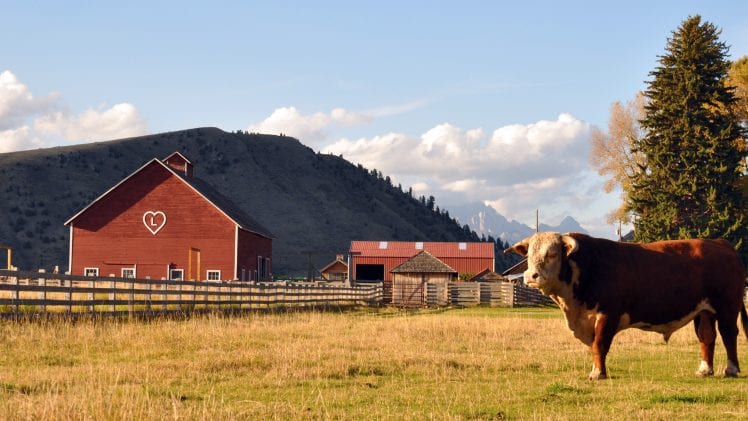 Pears, peaches and much more

A dirt road leads up a hill to Blum Ranch in Acton, Calif., where the Blum family has been growing peaches, pears and lilacs, and keeping bees for more than a hundred years.

In 1891, George Blum, a Swiss stonecutter working in Los Angeles, was looking for a better life for himself, his wife Magdalena and their two sons and two daughters. One day, he took a train to Acton, where he borrowed a shotgun from the local saloonkeeper to shoot rabbits and followed a stream into Aliso Canyon.

“He was attracted by the running water,” says Blum’s granddaughter, Elizabeth (Blum) Billet, who works the ranch with her husband Ray. “He was also interested in keeping bees, and there were beekeepers in the area.”

He filed homestead papers in 1891 and obtained water rights in Aliso and Gleason canyons. For the next few years, he continued to cut stone in Los Angeles during the week, and the family commuted on weekends to their 40-acre homestead. He cleared brush, hauled rocks, dug wells, raised animals and grew vegetables.

When George and Magdalena’s two sons, George J. and Bill, were 11 and 10 years old, they stayed by themselves at the ranch. In the mornings, they got up early, took the cows to pasture, fed the chickens and went to school. After school, they milked the cows and did other chores and their homework.

By 1893, George had nine beehives and was producing comb, honey. By 1915, he had up to 500 hives. “That was how they had enough money to build the house, the pipeline, and the dams,” Elizabeth says.

George built the family’s two-room stone house with mud for mortar and a dirt floor, and the barn. To bring water to the surface, he dug underground and filled the space with rock and cement. He also had underground dams built so water flowed to a collection box. He and his sons made the 6 and 8-inch cement pipes that took the water from there to the ranch.

He and Magdalena had two more daughters. In 1910 and 1911, twenty years after filing homestead papers, he planted the first orchards of 1,200 pear and apple trees. George J. and Bill homesteaded their own land, but they stayed on the ranch, planting more pears and apples and continuing to keep bees for honey. They later added lilacs, which grow well in the Antelope Valley, where the temperatures drop below freezing in the winter.

In 1953, George J.’s daughter Elizabeth married Ray Billet, who was raised nearby on his grandfather’s homestead. Since then, the couple has worked on the now 150-acre Blum Ranch. These days, two orchards cover about 36 acres. They grow some 1,000 pear trees, down from the maximum of 1,800 trees.

They’re growing fewer pear trees for two reasons, Elizabeth says. First, they used to be able to use copper dust on the trees when they got blight badly in the spring, but since 2005, they’ve had to use copper spray, which is much more time-consuming to apply. 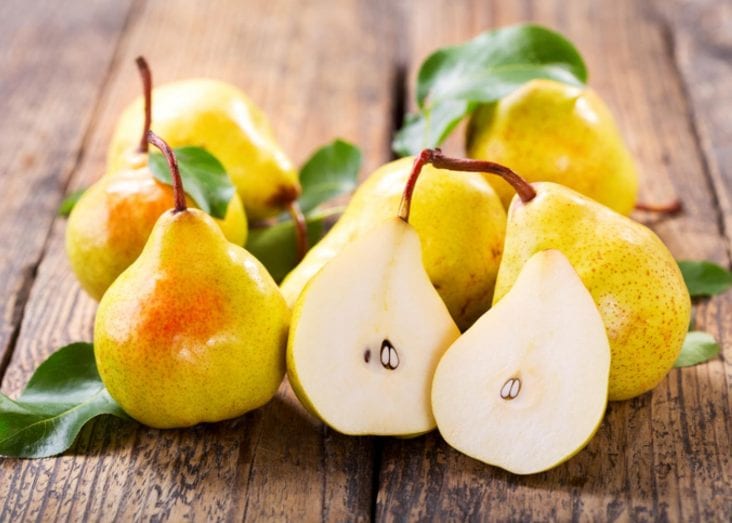 In addition, she says, “There isn’t much movement on the wholesale market for pears. Where we lost pears, we planted peaches.”

They’ve also interplanted with peach trees, doubling the original density of trees. They grow close to 3,000 peach trees, 1,000 of which are “Blum’s Beauty.” They also grow four acres of lilacs.

The Blum’s Beauty peaches were an unexpected bonus for the family.

“We bought about 300 Faye Alberta trees,” Elizabeth says, “and one tree ripened about a month or a month and a half later than the others. We didn’t know what kind of peach it was, but it was good.”

University of California, Davis, scientists couldn’t identify it either, so the Blums were authorized to name it. They propagated it by cutting shoots from the branches, wrapping them in towels, putting them in an ice chest and taking them to a nursery, which grafted them onto nematode-resistant rootstock.

That wasn’t the end of the surprises, though. The fruit on one of the limbs of one of the grafted trees bore sports, or mutations, that turned out to be nectarines – unfortunately, an inferior variety.

The average rainfall in the area is between 9.5 and 10 inches, Elizabeth says, which usually provides enough water for the trees through spring. After that, they use their wells, which are run by electric pumps.

“Some of the pears are almost 100 years old,” Elizabeth says. “Ray has been afraid to switch to drip because these trees are used to having water all over. Originally they were irrigated with furrows.”

When the rains stop in March or April, the cold begins, and the couple has an alarm in their bedroom that warns them when the temperature drops too low. “It gets cold, 32 degrees or less. If it’s 28 degrees or less for very long, we can lose the whole crop” – and here she smiles: “You don’t need to go to Las Vegas to gamble.” 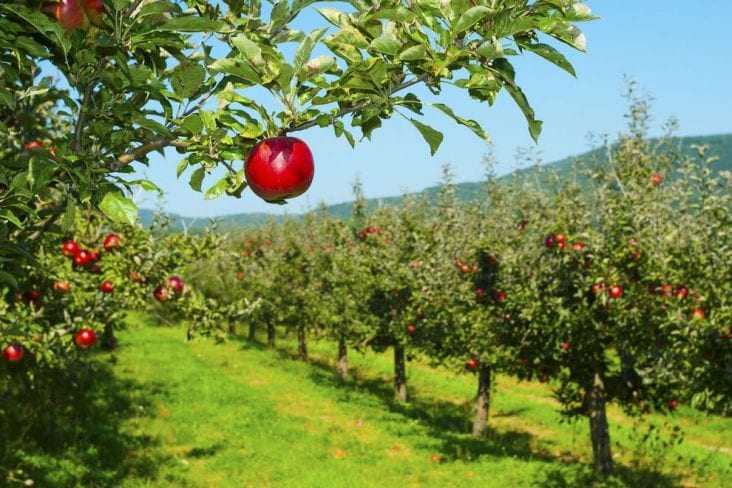 They can’t use smudge pots anymore, so they have wind machines, but these only raise the temperature three or four degrees, she says.

They fertilize the trees that have sprinklers with ammonium sulfate and the trees on drip lines with urea. They leave a lot of the prunings to get composted back into the soil.

“A lot of people here have gone to organic,” Elizabeth says, “but for the first year or two, they don’t have much of a crop. We haven’t gone to that.” For weeds, they spray close to the trees and mow between the rows. They use some insecticides, but “no more than we have to for mites on peaches and pears, codling moths on pears and twig borers on the young shoots on peach trees.” They spray copper on the pears for blight and zinc for leaf curl.

They start hiring in February: seven workers for pruning and an additional three for the week or two that cut lilacs. Between mid-May and June, they hire another 10 or so to thin the peaches. They add another 12 to harvest their four varieties of peaches. The Faye Alberta’s ripen late August, O’Henries early September, Cal Reds mid-September and Blum’s Beauties between late September and October. Twelve people work in the packing shed. They do all their packing and grading.

Marketing is a challenge because they pick the fruit when it’s riper so it has more flavor. That lowers its shelf life, Elizabeth says, and wholesale markets want fruit greener. They’d like to find markets that want to sell riper fruit.

Elizabeth has a mailing list of 2,500 to 2,700 customers who buy fruit at the farm, which she updates every year. They come from hundreds of miles away.

“A lot of the customers who come here want them to tree ripe, but we can’t let them all sit there. They get bruised before they’re graded and sorted.”

“It’s getting harder all the time,” Elizabeth says. There are expenses for water rights, taxes, and electricity for the good pumps and refrigeration. Regulations about pesticides and the sizes and grades of fruit they can ship. Permits for hazardous materials and burning brush. Classes they have to take, for example, in irrigation.

And then there were the wildfires.

The Crown Fire swept through the area in 2004. “It came through about two to three weeks before we started picking peaches,” she says. “They wanted us to evacuate, but we wouldn’t do it. Ray said, ‘I’m not going anywhere, so you might as well quit telling me.’ He told me to get the car loaded up, and I sat down the road watching the flames. The fire was just a wall of flames that came through the lilac field. It burned the whole three-acre field that was planted in the 1940s and 50s.” 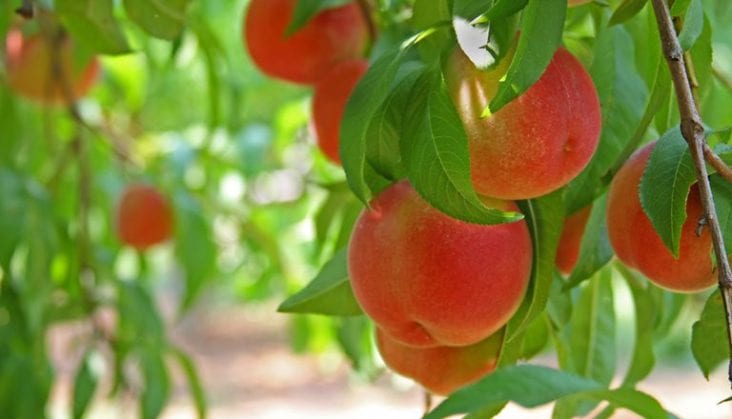 It destroyed one row of roughly 500 peach trees around the perimeter of the orchard. It also went through another eight acres of trees that they’d decided not to prune that year because they knew there wouldn’t be enough water for them. Some of the trees that didn’t burn, didn’t recover. The fire also destroyed a lot of the drip irrigation, including all the drip irrigation for the lilacs. Although the lilacs were burned, they sent up new shoots.

“Ray figures we lost half a million dollars, between the lost year of lilacs and the peaches,” Elizabeth says.

“When we saw all that smoke coming in, we thought, ‘Not again,’” she says. They packed up the car and were ready to go again, but the fire skirted around the ranch this time. Although there was no fire damage, the road to the ranch was blockaded for three days. Workers couldn’t get in to pick the peaches that were getting overripe, and customers couldn’t buy the ones that were already picked.

The next winter, heavy rains washed sand and debris from the mountains that had burned and buried the water collection box. Ray and another man had to dig it out with a tractor.

Nevertheless, Elizabeth says, “I’ve lived here all my life, so I’ve been lucky. It’s a good life and we enjoy the nature we see: the sunrise, sunset, rainbows. We have such a variety of people we know, friends and customers, so we’re blessed that way.”