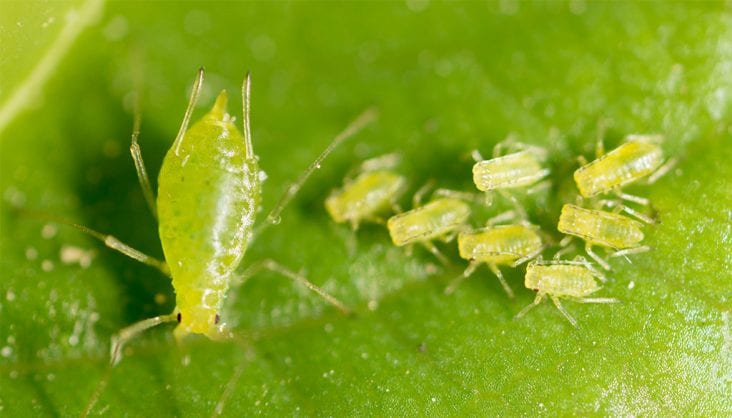 Aphids: Look out for those sucking mouthparts and large numbers of insects

In late summer, just-planted produce can look pretty good in the field but don’t be fooled. Small aphids may be just a few plants away. And there usually aren’t just a few. It can be hundreds to thousands, so when you rub your hand on the leaf it feels waxy and sticky.

The threat is especially important on late-planted, cool-season crops such as broccoli, cabbage, collards, kale and turnips, Charlotte Glen, an Extension horticultural agent with North Carolina Cooperative Extension, said. These insects are about 1/8-inch in length and have six legs. Their colors can vary from green, yellow, orange, brown to black. On vegetables, she said the most common is the greenish-colored cabbage and turnip aphids. They particularly like cabbage, collards, kale, turnips, mustard, broccoli, cauliflower, brussels sprouts, and radish.

Aphids have sucking mouthparts so they can feed on the sap of production plants, said Lee Townsend, an Extension entomologist with the University of Kentucky, and they form in large numbers on the underside of leaves. The winged aphids will land on the plant and deposit wingless young aphids, then the winged ones move onto another plant. These young ones or nymphs can mature in seven to 10 days and begin producing 40 to 60 offspring. In colonies, these aphids can grow to hundreds and thousands on a plant in just a few weeks, he said. The sheer numbers and infestation of these young aphids on one plant can cause leaves to wilt or turn yellow due to aphids removing the sap. Depending on the severity of the damage, the leaves may look distorted, and the fruit and flowers may look malformed.

Glen said cabbage and turnip aphids really like cool, dry weather. Unfortunately, by the time growers see them under the leaves, the aphids have increased in numbers, and their feeding may crinkle leaves or stunt or kill plants.
“Aphids produce a large amount of a sugary liquid waste called honeydew,” Townsend said. “A fungus called sooty mold can grow on honeydew deposits that accumulate on leaves and branches, turning them black. The appearance of sooty mold on plants may be the first time that an aphid infestation is noticed. The drops can attract other insects such as ants that will feed on the sticky deposits.”

Glen said the waste can attract wasps too. Aphids can spread viruses. “However, it is seldom possible to control these diseases by attempting to kill the aphid vectors with an insecticide,” Townsend said. “Aphids carrying viruses on their mouthparts may have to probe for only a few seconds or minutes before the plant is infected. Resistant varieties or sequential plantings may be helpful in reducing problems with some viruses that attack annual plants.”

Control aphids right away after finding them. “Cabbage and turnip aphids are not killed by cold weather in our area and survive through the winter, most commonly on collards,” Glen said. “Both organic and synthetic insecticide sprays are available to control aphids. When using either, make sure to cover plants completely, especially the backside of leaves, since aphids often shelter in pockets and crevices underneath leaves and in buds. Repeated applications are usually necessary to control this pest.”
Townsend said early detection or weekly inspection for aphids is key to reducing their infestation. When inspecting, he advised looking closely at the bud region and the undersides of the leaves. If a cluster of aphids is present, then they are well established and will likely grow in numbers.

Clusters found on about 5 percent or more of the plant requires the use of control measures, usually in the form of contact insecticides. He said that means that the chemical spray must hit directly on the aphids. This can prove difficult when a large number of aphids are on the underside of leaves and protected from the chemical by the foliage. So a stream-type spray works better than an even spray pattern, he said.

In some cases, growers can use summer oils to control aphids. These oils suffocate the aphids and may disrupt their membranes, Townsend said. However, he warned that some oils under high temperatures can damage plant foliage, so read the label carefully.

Another way to control aphids is to use fatty acid salts or insecticidal soaps. Townsend said these also seem to disrupt the aphid’s cell membrane. Direct contact is advised.
In addition, growers can control aphids by using malathion, chlorpyrifos and acephate products. Like with oils and soaps, good coverage is necessary and may require additional sprays, Townsend said.

However, Townsend said lady beetles and lacewings may not be able to eat aphids fast enough to keep up with a large number of aphid colony reproduction.

Whatever way growers manage aphids, they must stop the sucking of sap and control them before they reach large populations.