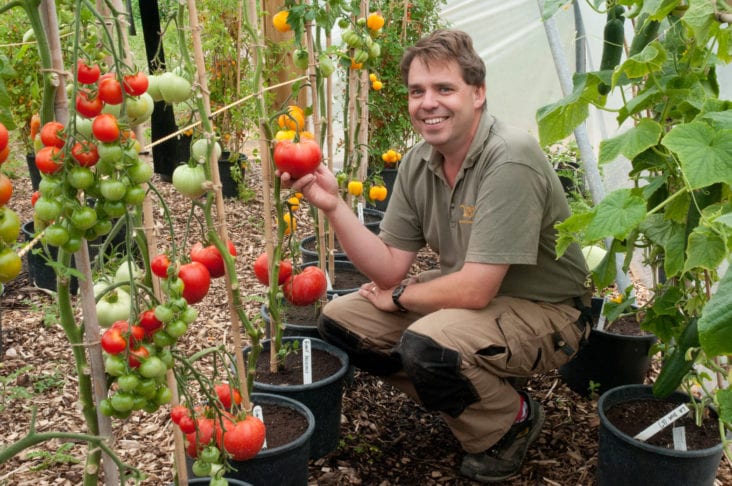 When consumers think of tomatoes, they often debate whether it is a fruit or vegetable. Growers know that botanically a tomato is a fruit because fruits develop from the fertilized ovary of a flower, whereas a vegetable is any edible vegetative part of a plant that doesn’t happen to be a fruit. Growing Tomatoes

Politics have muddied the scientific definition with court cases as old as the late 1890s declaring specific crops fruits or vegetables on factors other than botanical guidelines. As a result, tomatoes are included in the USDA National Agricultural Statistics Service Vegetable Summary.

Regardless of its status as a fruit or a vegetable, the crop is one of the most popular among consumers and relatively profitable for growers. “It is among the most versatile crop in terms of how it can be enjoyed, so most people have some form they enjoy,” said Mark E. Uchanski, Ph.D., an assistant professor at Colorado State University.

Tomatoes are the fourth most popular fresh market vegetable in the United States, ranking behind potatoes, lettuce and onions. Consumers eat about 17 pounds of tomatoes per person each year. The USDA National Agricultural Statistics Service Vegetable Summary reported that 97,500 acres of tomatoes (excluding cherry, grape tomatillo and greenhouse varieties) were planted in 2015.

Commercial tomato production is divided into two categories: processing and fresh market. Processing tomatoes, grown predominately in California and Florida, are harvested for canned products such as sauces, stewed, diced and whole packed tomatoes, among other uses.

California produces between 12 and 14 million tons fresh weight depending on the year, said Timothy Hartz, director of the University of California Vegetable Research Information Center (VIRC).

Nearly all the processing tomatoes are grown in the Sacramento and San Joaquin Valleys of central California. “We dominate production because our semi-arid, Mediterranean climate is ideal for tomatoes; roughly 70 percent of the world supply is grown in climates similar to California, such as Spain, Italy, Turkey, etc.,” he added. 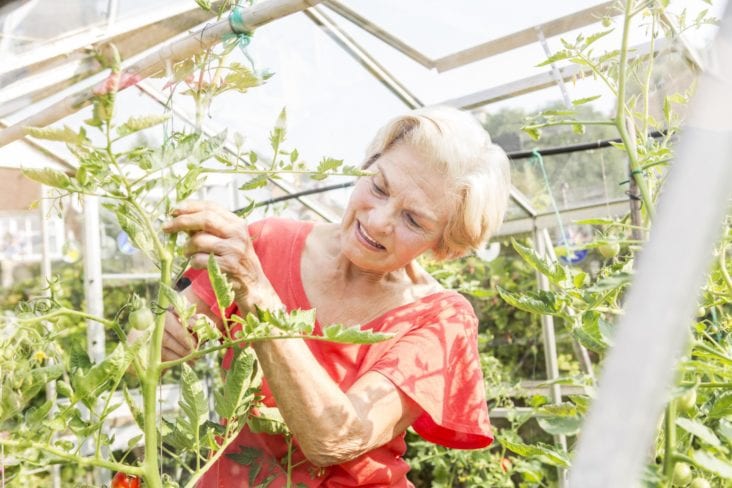 Fresh market tomatoes, the focus of this article, are grown in all 50 states. “California and Florida produce more than 35,000 acres or about two-thirds of the total U.S. fresh market production. The others to round out the top six are Ohio, Virginia, Georgia and Tennessee,” Uchanski said.

The crop is versatile and can be grown in an open field, a greenhouse and under high tunnels. Since the crop is in demand year-round, growers have multiple opportunities for a revenue stream.

Tomatoes grow in a wide range of soil types. As long as the soil is warm and well-drained, tomatoes can be grown in light sand to heavy clays, though loams are considered to be the ideal.

“The results of the soil test will tell you how to manage the field so you get a good yield,” he added.

Based on a soil sample, lime can be applied to the fields to bring the fertility into balance and can provide a good source of potassium and magnesium. “Compared to fertilizer, lime is cheap,” Kemble said, “but it’s often overlooked and scrimped on.”

Fresh market tomato crops are typically established by transplanting seedlings. Processing tomatoes or those that are mechanically harvested, tend to be direct seeded. Direct seeding can be difficult and requires higher rates of seed per acre. Increased weed pressure, risk of seed washing out during rain and delayed planting often make direct-seeding less attractive to fresh market growers.

For example, if there is a known disease issue in a geographic region, such as Fusarium wilt, it may be prudent to choose a cultivar resistant to that disease rather than choosing a variety based on other characteristics.

The local Cooperative Extension office or agent can provide guidance as they are most aware of cultivar trials in your area and the “winners” of the group. “Another option is to (review) the use the All American Selections (http://all-americaselections.org/winners/) because they have been trialed and evaluated across the country and are likely to do well for you,” Uchanski said.

The majority of fresh market producers plant seedlings in raised, mulched beds (either plastic or straw). Before the 1970s most tomatoes were grown on the ground. “Nearly 35 percent to 40 percent of the yield was lost to defects,” Kemble said.

Planting beds are typically 3 to 8 inches high and 30 to 36 inches wide. Beds promote good drainage and can increase production in poorly drained soils. However, in dry conditions, raised beds may need irrigation.

Though some growers may still leave the plants to trail on the ground, most have transitioned to a stake or trellis system. “Today, closer to 85 percent of the yield is harvested because of the staking method,” he added.

Vigorous, uninterrupted early season growth is critical, which can be ensured by minimizing water and pest stresses,” Uchanski said.

Later in the season, during fruit development and maturation, nitrogen should be backed off to avoid more secondary vegetative growth and possibly delayed harvest.

Pest pressures threaten plant development and yield. Tomato hornworms, fruitworms, aphids and leafhoppers are most common. These pests can be managed through exclusion (small scale for leaf hoppers), physical removal (small scale for hornworms), pesticides, insecticidal soaps and even some biological controls such as Bacillus thuringiensis.

Mites can also be problematic, but they can be managed by other insects and through the use of trap crops. “Start at the field edges and mow all the weeds around the edges, which eliminates a place for the mites to live,” Kemble said. “By mid-season, mites will no longer feed on a trap crop so it’ll be necessary to use insecticides along the edges of the fields to control them.” Read more about tomato pests on page 24.

Fresh market tomatoes may suffer from a number of foliar and soil-borne diseases. Depending on the growing region and frequency of land use for tomatoes, incidence and severity may vary widely. “Foliar diseases such as early blight (EB), Septoria leaf spot (SLC) and late blight (LB) are very common,” said Mahfuz Rahman, Ph.D., extension plant pathologist at West Virginia University, Morgantown.

The EB and SLC pathogens, Alternaria solani and Septoria lycopersici, can survive on the infected plant debris in a field or garden. Conversely, the late blight causing organism, Phytophthora infestans, does not, except where there is a continuous availability of tomato or potato crops. Crops in southern Florida or greenhouse and high tunnels may be more susceptible to late blight because the crop is always present. The late blight causing organism can be brought in an area by wind or infected potato tubers.

A few other foliar diseases such as leaf mold and powdery mildew can be a bigger problem inside the greenhouse or high tunnel than open field. Among soilborne diseases, bacterial wilt, Fusarium and Verticillium wilt are more common. In addition, anthracnose and tomato spotted wilt virus (TSWV) can also be a problem.

Disease pressure can vary significantly from one region to another. “Most of the fungal foliar diseases are favored by moderate to high temperature and a combination of prolonged leaf wetness and high relative humidity (greater than 90 percent) during the growing season,” Rahman said.

Spores of these diseases can also be spread by splashing rain. Disease pressure is always higher in the southeast and humid eastern seashore compared with areas with low relative humidity. “In addition, areas with intensive cropping and less rotation get more diseases,” he added.

Some diseases like southern blight caused by Sclerotium rolfsii and bacterial wilt also known as granville wilt caused by Ralstonia solanacearum, are more common and serious in the southeastern United States but not a huge problem in the Northeast. Fusarium wilt caused by Fusarium oxysporum f. sp. lycopersici is much more severe in areas with higher temperatures. Symptoms are most prevalent during the time of the year in an area when temperature ranges from 80 to 90 degrees Fahrenheit.

Prevention is the best option for managing tomato diseases. Many important tomato diseases can be seedborne. Use of certified or treated seeds (hot water for organic and fungicide for conventional) can reduce the incidence of many diseases. Seeds should only be purchased from reputable companies or suppliers.

Similar precautions should also be taken for purchasing transplants. Tomato varieties with disease resistance are available that can greatly reduce disease severity and can be found from the following link: http://vegetablemdonline.ppath.cornell.edu/Tables/Tomato_2013.pdf.

Rotating sites where tomatoes or potatoes were not grown for the last three years should also reduce disease pressure, especially those that are initiated from contaminated ground. However, pathogens that are windborne can still cause disease. Good cultural practices encompassing removal or soil incorporation of infected plant debris at the end of the season should reduce inoculum for the next tomato season. In addition, use of mulch, drip irrigation instead of sprinkler, removal of lower leaves near the soil line, staking plants to keep upright and providing recommended spacing for quick foliage drying usually reduces foliar disease incidence and severity.

“However, in a rainy and humid growing season, use of protectant fungicides may be necessary. Most commonly used protectants are copper, chlorothalonil and mancozeb,” Rahman cautioned. “Products with higher efficacy and limited kickback activity can be found in vegetable production guides of respective growing regions.”

In most systems weeds are controlled with crop rotation, chemical methods (herbicides) and cultivation (mechanical). Black plastic mulch can also be used in addition to suppression with organic mulches, such as straw.

Hardy weeds like nutsedge in the southeast can grow through the black plastic mulchers. “To prevent nutsedge from overtaking a crop you have to prevent it from growing by using a preemergent,” Kemble said. Read more about weeds in tomatoes on page 22.

The length of time from planting to harvest will depend on the variety of tomato that is selected. On average, it takes 70 to 125 days for tomatoes to reach maturity after planting. How and where the tomatoes are sold largely determines when it’s time to harvest. There are six commonly recognized stages of ripeness for tomatoes:

“Tomatoes harvested for local fresh market sales are picked red (full-ripe or over-ripe) depending on proximity to market,” Uchanski said.

Once the tomatoes are harvested, it’s time to sell. Use whatever marketing strategy works in your area. For example, some markets may be looking for local, naturally grown, organic certified tomatoes, whereas other consumers will look for superior flavor or quality, time of year, etc.

Most importantly, never sell a low quality product to maintain a positive reputation. “Build and maintain relationships with your customers or buyers and they will generally stick with you,” Uchanski said.