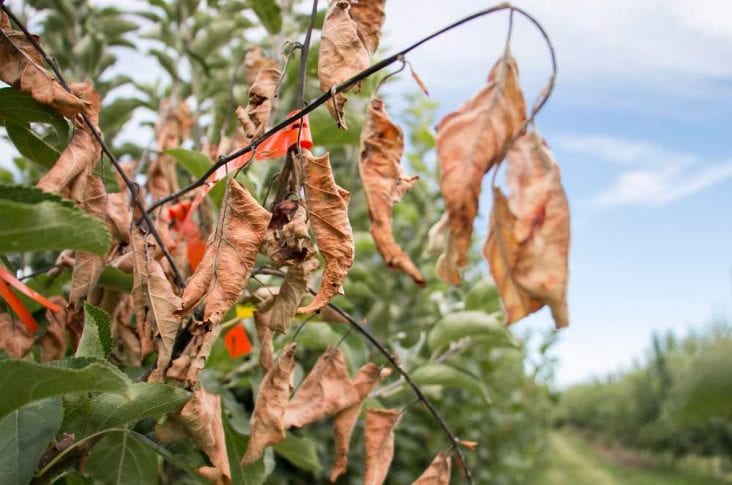 Fire blight is near the top of the list of diseases for apples, crabapple, pears, and quince orchards, as it has the potential to cause serious economic loss and can even completely destroy an orchard.

The term “fire blight” is derived from the appearance of infected leaves on very susceptible trees, which suddenly turn brown, giving the look of having been scorched by fire (Figure 1). Erwinia amylovora causes the disease and was the first bacterium proven to be a plant pathogen. To understand its significance, in 2000 a single fire blight epidemic in Michigan resulted in the death of over 220,000 trees with a total loss of $42 million. Annual losses to fire blight and cost of control in the United States have been estimated to total more than $100 million.

Control of the disease is complicated as nearly every part of the fruit tree has the potential to be infected. Unlike many fungal diseases that can be managed by a fungicide spray, fire blight is a disease that, once present in an orchard, is extremely difficult to completely eliminate – even a hailstorm can spread the bacteria. Effective management requires an integrated approach using sanitation, cultural methods, and protective chemicals.

Know how to prevent

The majority of fire blight epidemics occur at bloom, where pollinating insects carry the bacteria from flower to flower. It is therefore important that overwintered cankers or “holdover” cankers are eliminated during the end of winter/early spring pruning and destroyed by burning or burying as this is an important inoculum source. In an orchard with a history of fire blight, or one in which a grower has any suspicion of inoculum a disease-forecasting program such as Cougarblight developed at Washington State University or Maryblyt developed by researchers at the Universities of Maryland and West Virginia http://www.caf.wvu.edu/Kearneysville/Maryblyt/ should be used to allow timely applications of streptomycin formulations to protect blossoms from blight bacteria. These streptomycin formulations should only be used when needed and to protect blossoms from infection, not for controlling shoot blight as the fire blight bacteria can and have become resistant to streptomycin. Tips of shoots may wilt rapidly giving a shape reminiscent of a shepherd’s crook (Figure 2). In situations where streptomycin resistance is known, the antibiotic Kasumin may be an alternative as it is now registered in North America for use in the majority of apple- and pear-producing states other than California. The major drawback is the price, as it is currently about three times more expensive than streptomycin.

The use of the environmentally friendly growth regulator prohexadione-calcium (Apogee) is very effective at controlling shoot blight but needs to be applied before fire blight symptoms are seen. It should not be used on Empire or Winesap apples due to the potential for fruit cracking. Once fire blight symptoms are seen, bacteria are already inside the tree and even though copper is effective, it is not systemic. Fertilizers, especially nitrogen, should be used with care to reduce prolific shoot production as such growth will be very susceptible to fire blight (Figure 3).

What are the triggers?

It has been known for many years that insects are involved with inoculum spread and potato leafhoppers (PLH) are now considered the main culprit, with young plantings being at particular risk. Scouting for PLH should be conducted; consider applying insecticide, if necessary.

For those establishing an orchard, it is recommended that growers choose rootstock with good resistance to fire blight such as Malling 7, Geneva rootstocks, G.11 and G.16, or G.41 on replanted soil (http://goo.gl/EnmJgI). Although there are no totally-resistant varieties, a grower should avoid using varieties that are very susceptible to fire blight, particularly if their area has a history of fire blight. Unfortunately, popular demand has caused a shift to more sensitive varieties like Fuji, Honeycrisp, Ginger Gold, and Gala. Trees are also planted at higher densities, which results in more rapid tree-to-tree disease spread.

The use of more resistant rootstocks and Scion is a particularly important control measure for organic producers. A new pear variety Gem released jointly by U.S. Department of Agriculture (USDA), Oregon State University, Michigan State University, and Clemson University has many desirable horticultural traits in addition to having good fire blight resistance. It could be valuable to both the organic orchards where they have few reliable options for fire blight control and also for conventional orchard locations where fire blight has hampered pear production.