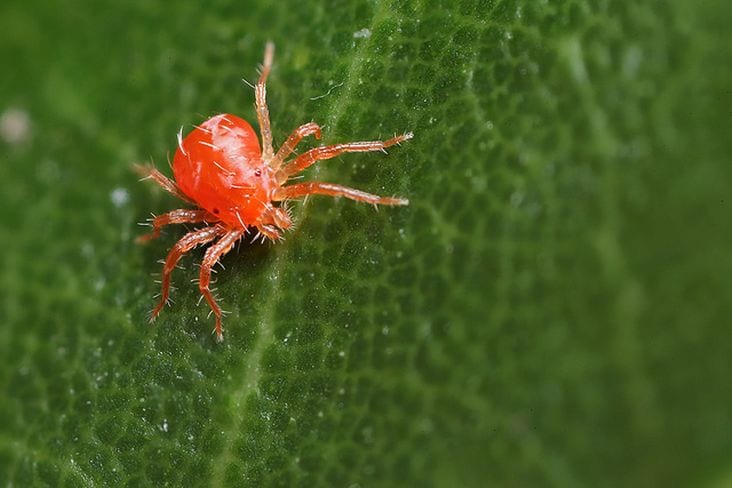 Many new miticides for strawberries and vegetables

All of the mites have specialized mouthparts to pierce the plant tissue and remove the cell contents and fluids, typically causing a downward curling of the leaves and a yellowing or bronzing appearance. Broad mites and cyclamen mites also inject a toxin, similar to a plant growth regulator, into the plant tissue as they feed, causing distortion of the apical tissue, curling and/or wrinkling of the leaves, blackened stems, and misshapen fruit. To make matters worse, damage caused by the toxin may show up some distance from the actual feeding site of the mite. In warm temperatures, a complete mite life cycle from egg to adult may be as short as five to 12 days. Since female spider mites each can deposit over 100 eggs, mite populations literally explode overnight during hot, dry weather. In New Jersey, populations of spider mites generally build up during the midsummer months, from late June until mid-August.

All of the mites are very small, with spider mites being less than .02 inch in size as adults, and broad and cyclamen mites being less than .01 inch as adults. Because these mites are so damaging if left unchecked, early detection is important, even before damage is noticed. Spider mites and broad mites can be detected by holding a piece of white or yellow paper under the foliage and rapping the foliage to dislodge the mites, which are found on the lower surface of young foliage and are then more easily seen slowly walking on the paper. Cyclamen and russet mites are more difficult to monitor than spider mites, and because of their tiny size and feeding habits, russet mites feed on the upper leaf surfaces and stems, and cyclamen mites feed on blossoms, leaves, and stems and under the calyx of small peppers. Thus, field scouting is difficult for these mites, and monitoring for early signs of plant damage when the fruit is present but still small is often the best option.

Management of spider mites in vegetables

Growers can take steps to reduce the chances of spider mite outbreaks on their farms:

Miticides labeled for control of mites in vegetable crops/strawberries vary in terms of which crop(s) they can be applied to and how they should be used (stage of mite development) for best mite management. The following is a listing of several of the labeled vegetable/strawberry miticides and some details of how these materials should be used for maximum effectiveness. Mites can rapidly develop resistance to any product, so it is strongly advised to use a sound miticide-resistance management program. If more than one application is needed for control of mites, rotate with products that have different modes of action, or group numbers (see www.irac-online.org for more information on group numbers and insecticide resistance). The group numbers are listed below and are also found on the cover page of each product label.

Acramite 50WS, Floramite 50WS (bifenazate) – a miticide developed from a new class of chemistry, the carboxylic acid esters. Effective against the motile stages of two-spotted mites and European red mites (but not broad and cyclamen mites), it also has limited activity against the egg stage (ovicidal activity). This material is a contact miticide with quick knockdown and long residual activity (up to 30 days), safe to beneficial with low impact on nontarget organisms. It is recommended for early use when mite populations are light, and thorough coverage is essential for best results. Labeled for eggplant, melons, okra, peppers, strawberries, and tomatoes. (Group # 25).

Agri-Mek 0.15EC, Abba 0.15EC, Temprano 0.15 (abamectin) – an older insecticide/miticide (1980) containing macrocyclic lactone glycoside that is a product of fermentation. The active ingredient is derived from the soil microorganism Streptomyces avermitilis, a naturally occurring organism. Because abamectin is a contact material that controls spider mites, broad mites and cyclamen mites, a spreader/sticker or NIS (nonionic surfactant) would enhance activity. Abamectin has little to no activity against the egg stage and affects only the motile stages of mites. It is slow-acting, but rapidly immobilizes mites after contact. Most effective when used early in the season as a preventative spray and has less impact after the mite population becomes established. It is toxic to fish and bees but has minimal impact on other beneficial. Good rainfastness and residual activity (up to 30 days). Labeled for celery, eggplant, endive, lettuce, melons, parsley, peas, peppers, potatoes, rhubarb, spinach, strawberries, and tomatoes. (Group # 6).

Comite, Omite (propargite) – an older organic miticide (1965), propargite is a contact material effective only against the motile stages of mite development. It is nonsystemic but has long residual activity. It has no insecticidal activity and is safe to honeybees and predaceous mites. Thorough coverage of the foliage is essential for effective control, and results are best if this material is applied when temperatures are above 70 degrees Fahrenheit. Labeled for sweet corn, potatoes, and strawberries. (Group # 12C).

Kanemite (acequinocyl) – acequinocyl has a unique mode of action with no known cross-resistance to other commonly used miticides. It has shown a high level of activity against all stages (eggs, larvae, nymphs, and adults) of the two-spotted spider mite and the strawberry spider mite. It has little effect on predators and parasites and has been given a Reduced Risk EPA classification. Kanemite results in a rapid knockdown of mites and has shown residual activity over 35 days after application. Originally labeled on strawberries only, the label was recently expanded to include edible beans, fruiting vegetables, and okra. (Group# 20B).

Kelthane (dicofol) – dicofol is one of the older (1957) chlorinated-hydrocarbon miticides, killing mites by contact only. It is nonsystemic and does not harm beneficial or other insects. Because it is a contact material, thorough coverage of leaf undersides is necessary for effective control. It is fast-acting, gives good initial kill of mites, and has long residual activity against mites, although there have been reports of reduced efficacy against spider mites (due to resistance). Dicofol is difficult to find, as it is no longer being manufactured, although existing stocks can be used up. Labeled for beans, melons, peppers, strawberries, and tomatoes. (Group # UnC – unknown mode of action).

Oberon 2SC (spiromesifen) – derived from a new class of chemistries called tetronic acids, having a new mode of action classified as a lipid biosynthesis inhibitor. Oberon is most effective against mite eggs and the immature stages of russet mites, broad mites, and two-spotted mites, with limited activity against adult mites. It is a contact material, relatively rainfast after application, and has residual activity up to 30 days or more. Oberon is also effective against whiteflies. Labeled for cole crops, cucurbits, eggplant, leafy greens, pepper, potato, sweet corn, and tomatoes. (Group # 23).

Portal (fenpyroximate) – a new chemistry miticide that is effective against the motile (larvae, nymphs, adults) stages of spider mites and European red mites. It has shown no activity against the egg stage. Portal belongs to the METI (mitochondrial electron transport inhibitor) class of miticides, which causes the mites to immediately cease feeding and ovipositing. It also prevents molting by the immature mites. This material has a long residual and can last up to six weeks after field application. Labeled on the fruiting vegetables and melons.

Pylon (chlorfenapyr) – Pylon is a new-chemistry class of miticides known as pyrroles and is effective against the motile stages of spider mites, cyclamen mites, and rust mites. It has no effect on mite eggs and should be used in combination with an ovicidal miticide when a moderate to a high population of eggs are present at the time of application. It has strong contact and stomach activity with good translaminar movement through the plant (moves rapidly from the top to the underside of a leaf), but has no soil systemic activity. It has a residual activity of up to 30 days. Labeled for greenhouse-grown fruiting vegetables (eggplant, peppers, pepinos, and tomatoes). (Group # 13).

Savey 50DF (hexythiazok) – Savey is a carboxamide compound used as a contact and stomach-poison miticide. It is effective primarily against two-spotted spider mite eggs and immature mite stages but has no effect against adults. However, treated female adults will deposit nonviable eggs. Savey is nonsystemic and safe to insects, beneficial mites and wildlife. Has a slower mode of action, so best results are obtained if used early in the mite infestation. Control lasts for 50 to 60 days. Labeled for strawberries. (Group # 10A).

Vendex (fenbutatin-oxide; hexakis) – one of the older miticides (1974), Vendex is an organic tin compound used as a contact miticide effective against motile stages of primarily two-spotted mites. It has no ovicidal activity and is slow-acting, usually quickly paralyzing mites but taking five to six days to kill the mites. Agitation is required during the application, and thorough coverage is important. It has the residual activity of up to 30 days, but is a warm-weather material, working best when air temperatures are above 70 degrees Fahrenheit. Can be mixed with other pesticides, but do not add oil to the spray solution. Labeled for eggplant and strawberries. (Group # 12B).

Zeal (extoxazole) – derived from a new class of chemistries, diphenyl oxazoline, Zeal has a unique mode of action that is classified as unknown or nonspecific target site, thus is placed in the mode-of-action Group # 10B. It is an excellent mite growth inhibitor, and stops the development of eggs, larvae, and nymphs on contact, but has little activity against adult mites. Thus it is a highly effective ovicide, but also has molt-inhibiting activity against immature mite stages, disrupting the mite life cycle. Also, adult female mites that come in contact with Zeal will deposit nonviable eggs. Zeal is a contact miticide with good translaminar activity, but is slow-acting and is best used earlier in the season before mite populations build up to harsh levels. Labeled for two-spotted spider mites on cantaloupe, citron melon, muskmelon, watermelon, and strawberries. (Group # 10B).