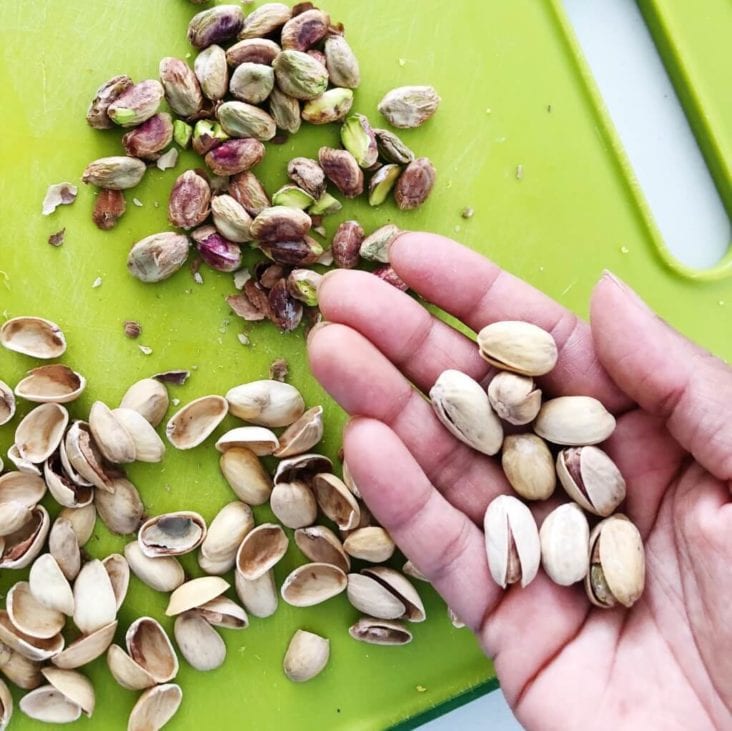 Tending pistachio groves in Arizona is about as different from raising corn and soybeans in Iowa as farming can be. When fifth–generation farmer Jim Graham began operating Cochise Groves in the high desert of southeastern Arizona, some of the new issues he encountered were water restrictions, bud-time frosts and a crop with the tendency to produce a major crop only in alternate years.

For Graham, the transition from corn and soybeans to pistachios began in 1995 when he met his wife, Ruth. Ruth’s father had started a pistachio orchard in Arizona in 1980, and his widow presented Jim and Ruth with the opportunity to take over. They began in 1998.

The U.S. pistachio industry is relatively young, much of it dating back to 1976, the year the U.S. placed a boycott on the importation of pistachios from Iran and Iraq (then the world’s leading producers) in retaliation for OPEC’s oil embargo. Prior to the embargo, Iran produced 9.6 million pounds of pistachios a year, and California 1.5 million pounds. By 2002, Iran was reportedly producing 661 million pounds, while California’s production had grown to 302.4 million pounds. California produces 97 percent of the U.S. crop; Arizona, 2.5 percent. The remaining .5 percent comes from New Mexico, Nevada and Texas. Pistachios are sold primarily as a snack food and are also included in puddings and ice cream.

Like most commercially grown pistachios in the United States, the 22,000 mature trees on 160 acres at Cochise Groves are of the Kerman variety. The orchard’s older Kerman trees were grafted onto Atlantica root stock, and newer ones onto the verticillium wilt-resistant UCB1 stock. Male trees are of the Peters variety. To assure windblown pollination and to ensure against a would-be devastating loss of any single male tree, male trees in the older orchards are planted one to every 14 female trees. In newer groves, the ratio is 1 to 24.

The estimated cost of starting a pistachio orchard is currently $3,000 to $5,000 per acre, an expense that is not offset by production until about year 10. Pistachio trees begin bearing at six to seven years, but do not reach commercial production until 10 years, and full bearing until 15 to 20 years. Under favorable conditions, pistachio trees can live and produce for centuries.

When trees are around 20 years old and have less energy to put out new growth than they did when they were younger, pistachios have a tendency to produce a relatively heavy crop of nuts every other year. This tendency to alternate-year bearing can also be influenced by drought, excessive rain, heat or cold, and high wind. A very hard freeze, such as that in 2001, will force the orchard into a severe alternate bearing swing. According to Graham, it is as if the cold resets the trees’ clocks. Graham works to mitigate the tendency to alternate bearing by pruning back the number of possible fruit clusters (thus forcing the tree’s energy into those remaining), watering and fertilizing.

From harvest to harvest

On the heels of one September’s harvest, preparations begin for the next, starting with fertilization, weed control and watering.

Beginning around Thanksgiving after Cochise Groves trees have lost their leaves and continuing through February, the year’s biggest task begins. Pistachios are apically dominant—their branch ends would naturally grow longer and longer—and about one-fourth of the wood of each tree must be pruned back every other year. The tops and sides of trees are first pruned mechanically, and then hand-pruned to a wineglass shape. Pruning serves to invigorate the trees and to maintain the 17-by-17-foot or 18-by-18-foot spacing and short, stiff branches necessary for mechanical harvesting. To enrich the soil, which is low in organic matter, pruned branches are shredded and the mulch spread back into the orchard.

Much of the month of March is devoted to checking miles of irrigation lines. Irrigation to supplement the 13-inch average annual precipitation in the Sulphur Springs Valley begins the first day of spring and continues to harvest.

As buds begin to push in April, frost control season begins. The biggest threat to Graham’s groves are spring’s frost or freezing temperatures. Although pistachios need 1,000 hours of chilling at temperatures below 45 degrees in order for buds to set, they do not need the April frosts, which sometimes occur at the grove’s 4,300-foot elevation. Ambient air temperatures below 29 degrees can damage the pollen and fruit buds without actual frost occurring. Because the Arizona air is so dry, the dew point may be below zero, but any temperature drop to 35 degrees puts Graham on high alert. He watches his trees, the weather and a subscription frost forecast carefully. Wind machine engines stand ready to power fans positioned throughout the orchard. Fans mix higher warm air with the colder air closer to the ground. Each fan serves a 10–acre area.

As the trees begin to leaf, foliar feeding begins. Feeding continues at least monthly from April through August. Insecticides or pesticides are added as needed. In order to cover every tree, Graham’s crews drive 80 miles every time they spray. From mid-May to September harvest, getting an adequate stream of water to each quarter of each orchard every fourth day is the biggest job. Pistachio trees need about 80 gallons of water per tree per day, which is delivered to the trees via a Bowsmith micro-sprinkler system. At Cochise Groves, irrigation water is pumped from wells registered and regulated by the state of Arizona.

By Labor Day, most of the pistachio nuts have split their shells, their hulls are loose on the trees and the nuts are ready for harvesting. Barring one of monsoon season’s big rain and hail storms, the pistachios will all be harvested within the optimal two-week period by 10 people working in two shifts. Among those working at Cochise Groves are full and part-time employees, other orchard owners and friends.

After a clam–shaped device grips and shakes the trunk of each tree for five seconds, a hail of pistachios falls onto the surrounding portable platform. The platform slopes downward to a conveyor belt, which carries the nuts into 4-by-4-by-2-foot bins. Each bin holds 1,000 pounds of nuts. Crews harvest an average of three trees a minute, but can harvest up to five trees a minute. A good year yields 4,000 to 5,000 pounds of marketable crop per acre. In alternate years, the yield is approximately half that amount.

Pistachios must be processed within 24 hours of harvesting to prevent hulls from staining the shells. Cochise Groves’ pistachios are trucked to processing plants in either nearby Bowie, Ariz., or to Alamogordo, N.M. Nuts at the Bowie plant are commingled with those of other groves, while nuts at the Alamogordo plant are kept separate by grower. At the processing plant, the nuts are weighed and the few leaves and sticks separated. Next, the nuts are hulled, sorted and dried for about three hours to reduce moisture from 45 percent to 10 to 12 percent. Slow drying and low temperatures preserve the nuts’ natural oils and thus their natural flavor. After drying, the pistachios are stored in continuously aerated grain storage tanks.

Having successfully transitioned from corn and soybeans in Iowa to pistachios at the largest family–owned and operated pistachio orchards in Arizona, Graham has recently begun a new venture. On 6 of the 15 acres at Cochise Groves, adjacent to the old Butterfield Stage route, he has planted grapes. Grapes are less prone to frost damage than pistachios because they bloom a little later and they produce fruit on new (rather than pistachios’ old) stock. Grapes will offer the benefits of diversification and help even out the income swings inherent with the alternate bearing tendency of pistachios.