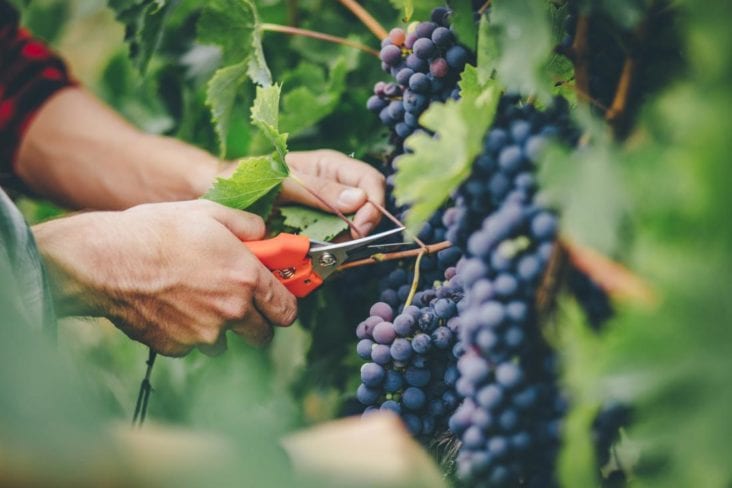 Grape growing in the South continues to grow as farmers look to supplement their incomes, or people interested in getting back to nature try their hand at planting varieties they believe will bring them a unique value-added product.

Recognizing the interest among farmers in North Carolina to seek out alternative crops, Horticultural Extension Agent Carl Cantaluppi decided to look at grapes. Cantaluppi, who serves Granville and Person counties, found that over the past few years, there was a big push to grow and market wine grapes. With the increase in production, North Carolina wineries became overstocked with wine grapes from other growers.

Cantaluppi realized he must look at something else, so he turned to seedless table grape production.

“Seedless table grapes fit into their production mix, and they wouldn’t have to grow extreme acreage,” he says.

Cantaluppi found that seedless table grapes eaten straight from the vine can earn a grower $3.50 a pound at local farmers’ markets. So, he began a seedless grape variety trial, looking at 14 varieties on an acre of land. Seedless grapes, which typically have thin skins, are commonly marketed as fresh market table grapes, he says.

With the help of Cooperative Extension at North Carolina A&T University in Greensboro, N.C., he applied for an Innovative Program Grant. Doreathy Booth, a farmer in Granville County near Oxford, N.C., received the grant amounting to $15,000 so Cantaluppi could conduct his variety trial.

The total cost of the project amounted to $25,603, not an inexpensive proposition for growers. “Besides disease, the challenge is the cost on a per-acre basis,” Cantaluppi says, “even though the cost for additional acres would be slightly less than the original.”

Marquis has large berries that are juicy, and they taste mildly fruity when first ripe, then stronger tasting two weeks later. The clusters are large, and the vines produce vigorously; the ripened fruit holds well on the vine. In the Piedmont area of North Carolina, the berries typically ripen from August 2 to 10.

Himrod is the most successful table grape released from Cornell University, according to Cantaluppi. The vines produce large bunches of seedless grapes that have a honey flavor with a melting, juicy texture. The clusters are loosely filled. In the Piedmont area, Himrod ripens from July 20 to 27.

Lakemont’s flavor is mild and has an excellent flavor when dehydrated into raisins. The clusters are more compact, and thinning of the clusters prevents overcropping. The berries range in size from small to medium and ripen in Piedmont from July 26 to August 3.

Interlaken has small, white berries that ripen very early and are green to golden in color. The clusters are medium-sized and compact.

Einset Seedless has medium-sized berries that are oval and bright red with a light, waxy bloom. The skin is a bit tough, but the berries taste fruity with a mild note of labrusca and sweet strawberry, according to Cantaluppi. The medium, soft seed remnant is not usually noticeable.

Vanessa is a red dessert grape. The berries are medium in size, and berry texture is firm to crisp. The flavor is mild and fruity. In Piedmont, Vanessa ripens between July 20 and 27.

Canadice produces medium to excessively compact clusters and has small, red berries. It ripens in Piedmont on July 26.

Reliance has large clusters with round, red, medium-sized berries. The skin is tender, and the flesh is melting in texture with a sweet labrusca flavor. Reliance’s cold hardiness is among the highest of the seedless varieties.

Suffolk Red produces medium to large clusters of mild-flavored red berries. Its clusters are loose. This grape ripens on August 10 in Piedmont.

Mars is a vigorous, blue seedless grape. Its flavor is mildly labrusca. The berries have a tough skin that separates readily from the pulpy flesh. Its clusters are medium-sized and cylindrical. This variety yields high and ripens in Piedmont from July 27 to August 10.

Venus is a vigorous and productive blue-black grape and has medium to large clusters that produce large berries with a mild labrusca flavor. This grape ripens in Piedmont from July 20 to August 3.

Glenora produces medium-sized blue berries that have an excellent flavor. It ripens in Piedmont from July 20 to 27.

Jupiter is an early maturing grape that is reddish-blue to blue in color when it matures. This grape has large, firm and tough skins that separate readily from the pulpy flesh. It has medium-sized clusters, and the taste has a distinct muscat flavor. Jupiter ripens in Piedmont from July 20 to 27.

Concord Seedless clusters and berries are smaller than a Concord grape. According to Cantaluppi, productivity is erratic due to its uneven ripening and actual seed production in hot temperature regions. Its flavor and texture are similar to a Concord grape.

The first year the vines produced fruit in 2007, a freeze hit Easter weekend and killed the primary buds. The secondary buds produced a fair yield. “As long as the temperatures remain cold, seedless grapes remain dormant,” Cantaluppi says, “but if air temperatures rise and a cold snap with a freeze occurs as the primary buds open, yields are reduced when the secondary buds emerge with fewer grape flowers.”

The second year’s harvest was destroyed by a hailstorm.

Booth prefers the Marquis variety, because it produces large, white grapes that are good for making raisins. “When I dehydrated it, it was like a golden white,” she says. “It has lots of juice and is a wonderful grape.”

She sells all her grapes and raisins at the Durham Farmers’ Market in Durham, N.C. She washes each one with a fruit and vegetable wash to remove any pesticide residue and freezes her dehydrated ones to market all year long.

Because few growers raise seedless table grapes in her area, Booth is able to sell all she can raise. The raisins are especially hot sellers. “They sell like candy at the market,” she says.

She has found that the hand labor involved is the most demanding part of raising grapes, which takes three to five years of growth before producing a good crop. During July, August and September, she picks the grapes. From February until past harvest, she prunes, sets up the plants with wire, removes any dead vines and weeds, mows, fertilizes and combs (thinning out some grapes from the bunches so others can grow larger).

Affecting yield in Piedmont is Pierce’s disease, which is caused by leafhoppers injecting a bacterium inside the leaves as they feed, Cantaluppi says. This disease affects the vascular system of the plant and causes it to die. While a problem in Piedmont, he says the effect of the disease is lessened in western North Carolina where they have colder winters that kill the insect.

To combat the problem, Cantaluppi is working with Don Hopkins, a plant pathologist at the University of Florida. In his research, Hopkins has inoculated grapevines that have a benign strain of bacterium that can prevent the vines from contracting Pierce’s disease. During 2010, Cantaluppi will learn if Hopkins’ inoculations worked.

With possibly a breakthrough from Hopkins’ research and further testing of the 14 seedless table grapes, Cantaluppi believes this product has a chance to serve as a viable alternative crop in Piedmont, N.C.

“We’re breaking new ground and will see where it will go,” he says. “If we can conquer the Pierce’s disease, we can do better.”

Several years ago, Joe Williams started his wine grape vineyard with 3 acres of Traminette, a white grape variety. From those 3 acres he was able to harvest and sell about 8 tons. He predicts when they reach full maturity, the vines will produce about 4 tons per acre or better of grapes.

Williams and his family raise grapes outside of Chatham, Va., and have increased their grape acreage to about 9 acres. Once a tobacco farmer, he searched for another crop that could give himself and his family members, who wanted to farm, an opportunity to return if they wanted to. Working beside him, when they can, are his wife, Brenda; his son, Jesse; his oldest daughter, Renee, and her husband, Billy Reaves; and his youngest daughter, Mary, and her husband, Chris Smith.

For their first harvest, the Williamses marketed their grapes to nearby Chateau Morrisette in Floyd, Va., and Tomahawk Mill Winery in Chatham. Looking ahead, Williams says he would entertain the idea of producing his own wine, bottled under his own brand name.

Knowing Williams and his determination, he likely will succeed.

Rocky Womack has written about agriculture and business for more than 25 years and currently serves as a contributing writer and correspondent for agriculture and business magazines, domestically and internationally. In the past, he has worked as a magazine editor and daily newspaper writer. Womack has won numerous awards for his interviewing, writing and in-depth reporting.