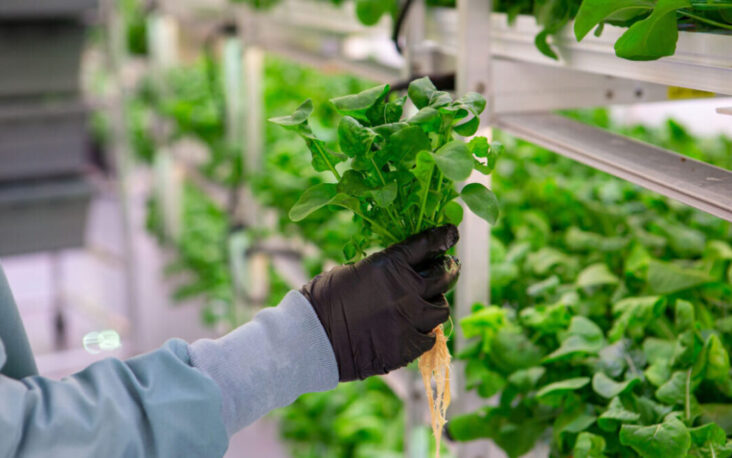 Not everyone has the right climate to provide nutrient-rich soil, the perfect amount of sun and warmth, and avoid harsh climates. As technology continues to shape and change the farming industry more sustainable alternatives have become accessible to grow food from any location. One of these sustainable methods includes using hydroponic systems.

In the most basic terms, hydroponics grows plants through a liquid nutrient solution rather than soil. This allows the roots to get all the nutrients they need without having to deal with poor-draining soil or other common issues. Hydroponics technically speaking can be grown outside but is commonly used indoors or in greenhouse spaces.

Since there is a controlled system of growing plants there are different elements to determine the growth in hydroponics:

The nutrient solution used in the hydroponic system consists of potassium, calcium, phosphorus, sulfur, and more in different quantities. Many types of salts are also used but easily substituted by fertilizers including bird guano and manure.

While most nutrients are drawn from the nutrient solution, the plants still require something to support their roots. Some substrates are:

With climate change, a lot of regions in the world are devastated by recurrent floods, which result in soil erosion. People from these regions can highly benefit from the use of hydroponics, shares Bowery Farming.

Hydroponics is not only a fairly convenient way to grow your food but there are also numerous earth-friendly benefits.

Traditional farming consumes a lot of water and much of it is wasted due to evaporation and incorrect irrigation.

Hydroponics on the other hand uses a lot less water because what you are growing is placed in a tube solution, which is recirculated leading to zero water wastage.

Also, it is proven that there is less evaporation with hydroponic farming leading to less watering in general.

Greenhouses have been reporting higher crop yields along with more quality products when comparing hydroponics to traditional farming.

This is because hydroponic plants are fed the required nutrients through a water-based solution rather than making them search for them in the soil which is what happens in traditional farming.

As the plants have to work less to find nutrients their reserved energy is invested in growing faster leading to a better yield. In a hydroponics environment crops also show fewer signs of diseases. It also becomes significantly easier to monitor the crops with developed technology

● You Don’t Need a Lot of Space

Another benefit of a hydroponic setting is that you do not need a lot of space to grow your plants. Because plants grow in their little tube, you can create a dense area of plants because their roots aren’t going to be competing for space with one another.

This also makes moving your plants much easier whereas transplanting them from indoors to soil can cause transplant shock.

● Less Use of Chemicals

Because hydroponics does not need soil to grow plants there is less chance of pests or bugs growing in it. This dramatically lessens the risk of plant diseases. Traditional farming is mostly reliant on the use of chemicals such as pesticides to keep the pests away which could be toxic to both humans and the environment.

Conventional growing techniques cannot be used to grow crops all year round because they rely on seasons. A Hydroponic setting on the other hand is mostly done indoors and so growers don’t need to worry about that. Crops can be grown throughout the year thereby reducing the need for food preservation.

Are There Downsides to Hydroponics?

As with anything, there are always a few considerations. With hydroponics, the good weighs out the bad but it’s worth discussing some of the drawbacks.

● There is an Investment

Starting hydroponics even on a small scale can be more costly than if you have a small plot of land outside. This is because you need to invest in pumps, tanks, controllers, and the overall setup of the building. Eventually, this can pay off but may take some time to do so. It pays off faster if you are selling your crops.

● Bad for the Environment

Hydroponic growing technology calls for an intricate system of tubes, timers, pumps, and containers. In case one of these fail to work the entire system is at risk of collapsing. This could also affect the total yield in the end.

In conventional farming, soil prevents the plants from reacting to extreme changes in temperature and also slows down the spread of certain diseases. Since no soil is used in a hydroponic setting plants are much quicker to get affected by temperature changes and there is also an increased risk of plant diseases spreading quickly.

Worth Making the Switch?

Hydroponics is becoming a popular option for farming and gardening because it produces a lot more reliability. It also allows for an incredibly sustainable way to grow food in all areas rather than just climates that have the right weather patterns. Although it does come with a few downsides, the benefits clearly outweigh the cons.

Because of the advantages, it’s a great system to look into especially if you plan on sharing or selling your crops with your local community. The high production rates with quality crops are reason alone to do it.