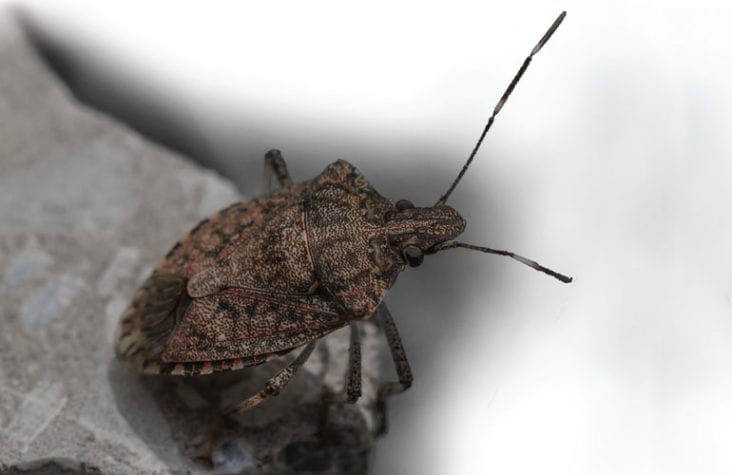 The squash bug ranges in size from about 1/2- to 3/4-inch when they are adults, according to Dan Pavuk, a lecturer and Ecology and Conservation Biology advisor at Bowling Green State University in Bowling Green, Ohio. Their color ranges from dark to grayish brown, the abdomen is filled with orange and brown stripes, and the back has a flattened appearance.

Pavuk, who also is a manuscript editor of Northwestern Naturalist, indicates that female squash bugs lay eggs in clusters, ranging from seven to 20, on the underside of leaves. Within seven to 10 days, each newly hatched orange to yellow egg is about 1/16-inch long. A few days after hatching, eggs turn to a metallic bronze color. Nymphs are wingless and pale-green to white, and their heads and legs may be reddish-brown. These nymphs hang out on the underside of leaves and around plant stems. As they age, their color changes to gray. In four to six weeks, nymphs become adults. Growers may see all stages of growth on one plant, Pavuk said, because of the extended egg-laying period for females.

In the fall, adult squash bugs start moving to plant debris in or on the edges of fields and close to nearby woods so they can overwinter in safety. Only the unmated adults overwinter, Pavuk indicates, and they will start to infest plants the next spring. These bugs suck the sap out of pumpkin plants, causing leaves to wilt and collapse. Where they feed will develop small and yellow specks that will turn brown. If bad enough, the leaf may dry up and die, and the vines may wilt. Plant stand losses and fruit damage are possible.

According to Pavuk, the best control is to monitor for the squash bug early, deal with any immatures, and monitor them closely during the seedling and early flowering stages. Because they feed on the underside of leaves, they are difficult to control with insecticides. The larger nymphs and adults grow, the harder they are to control. Sometimes, a large number may feed heavily on the seedlings, so Pavuk advises to control them early. He suggests one to two applications of a pyrethroid. While they can become damaging in the seedling stage, squash bugs do major damage during the flowering stage, and that may affect yield. If nymphs range from one to one and a half per plant (either before or during flowering), he advises growers to spray a foliar insecticide.

The adult squash vine borer is about 1 inch long and looks much like a wasp, according to Entomologist Jeffrey Hahn and staffer Suzanne Burkness, both at the University of Minnesota.

The resemblance to a wasp is an asset for this clear-winged moth, said Frank Hale, a professor of entomology at the University of Tennessee Cooperative Extension, who has statewide pest responsibilities. “Insects are trying to get an advantage,” he said. “These are brightly colored and have a niche where they can fly during the day. They get protection from menacing bees and wasps.”

So far this year, Hale said growers have already lost plants to the squash vine borer. To combat this, he advises them to stagger plantings of pumpkins or squash so they can avoid peak egg-laying times. He warns that this borer does more damage in a small field for a gardener than in a large field for a commercial grower. That is because the easier it is to spot one plant or just a few, the easier it is for the pest to find its target and attack.

The squash vine borer may sport an orange abdomen with black dots, according to Hahn and Burkness. Their front wings are a metallic green color, and their back wings are light or clear. The eggs are 1/25-inch and are flat shaped and brown in color.

Hale said growers can see the eggs on leafstalks or under the leaves. The larvae, related to the dogwood borer and peachtree borer, carry a white, wrinkled body with a brown head. Seen in the lower 3 feet of the stem, larvae sport three pairs of short legs and five pairs of fleshy prolegs on their abdomen. On each proleg are two transverse rows of minute curved spines. A more mature larvae can reach 1 inch long.

He said the pupa is about 5/8-inch long and brown. Growers can spot the pupa in the soil underneath a black silk cocoon.

Soon after emerging, adults lay eggs at the base of plants, Hahn and Burkness said. Within a week, the eggs hatch, and larvae will immediately start to bore into a pumpkin plant stem. This feeding prevents water from flowing to other parts of the plant, robbing it of life. When finished feeding, the larvae leave the stem and burrow into the soil where they pupate and remain until the next growing season.

As for damage, growers will notice wilting, then collapsing and eventually death from one or many squash vine borers. They may see holes and sawdust-like frass near the plant base, Hahn and Burkness said. The base may actually rot.

Control of the squash vine borer is difficult. They advise growers to practice integrated pest management (IPM). Unfortunately, hatching larvae are hard to control before they can go into the plant. Once these insects enter the stem, Hahn and Burkness believe control is almost impossible.

To monitor adult squash vine borers, growers can look for flying moths and put out yellow trap pans filled withe water, Hahn and Burkness said. They advise to check traps daily and apply an insecticide when necessary. As with any insecticide, follow label directions and contact your Extension agent or specialist with any questions. Be sure to see if a particular insecticide is registered in your state, as chemicals may be available in one and not the other.

Growers also can spread floating row covers over the plants when they just begin to vine, or when they spot any squash vine borers. Remove them in about two weeks after seeing the first adult. They warn not to use row covers if growers have planted pumpkins in the same field a second year. Squash vine borers like to overwinter in the soil near any host plants. They advise to rotate crops and avoid using floating row covers when pumpkin plants are flowering. This prevents bees from pollinating. Hahn and Burkness suggest applying insecticides to the stem base when the vines begin to run or when growers first spot borers.

Hale advises to spray directly at the main vine late in the day because beneficial bees or pollinators are active at daybreak. Spraying in the late afternoon or evening benefits growers. “If the egg hatches, it will kill the caterpillar before it bores into the plant,” he said.

Also for control, he recommends chopping up or disking plants in the ground at the end of the growing season so it stops larvae that may be left in the stems. He advises to plow the field again in the spring as a precautionary move, as it destroys cocoons. Although some moths may still fly around in the spring, this plowing will help to lessen the moth numbers.

Hale said planting an early trap crop of Hubbard squash will help to attract moths and keep them away from pumpkins. They also may lay their eggs on the squash instead.

He says the pheromone traps, where the sticky traps are baited with the borer’s sex pheromone, are effective for smaller growers who want to know when moths are active.