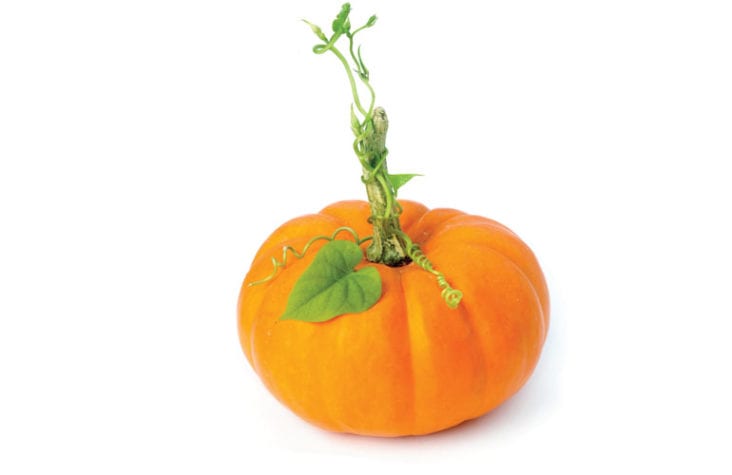 Fall harvest is synonymous with pumpkins. From the smallest, palm-sized miniatures to the traditional medium-sized carving to the mammoth record-setting giants, pumpkins are a staple crop for growers nationwide. Pumpkins play an important role in our culture, from families celebrating the annual jack-o’-lantern carving tradition to home decorators looking for ornamental pumpkins to the foodies who cook with them. They may not be among the largest commercially grown crops, but they are an important one. Growing Pumpkins

According to the U.S. Department of Agriculture, farmers produced 1.3 billion pounds of pumpkins in the top six states in 2014, a 17 percent increase from the previous year.

Illinois remains the leading producer of pumpkins, producing 745.8 million pounds. The large majority of the crops raised in this Midwestern state are processing pumpkins that end up as pie filling or other canned pumpkin products. California, Ohio, Pennsylvania, Michigan and New York are also among the top six pumpkin-producing states with 192.2, 105.3, 105, 97 and 69 million pounds, respectively.

Pumpkins belong to the gourd family, which includes cucumbers, honeydew melons, cantaloupe, watermelons and zucchini. These plants are native to Central America and Mexico, but now grow on six continents. Large-scale or small, growers nationwide can capitalize on the crop.

The large-leafed plant shoots out runner vines that can reach 2 to 3 feet in length. The plant can be finicky and challenging to grow. Although the crop can be grown throughout the country, in climates like the South large-scale commercial production is not recommended because of disease and insect pressure.

If you’re interested in adding this fall favorite to your lineup, read on for tips to make your crop successful from seed to harvest. 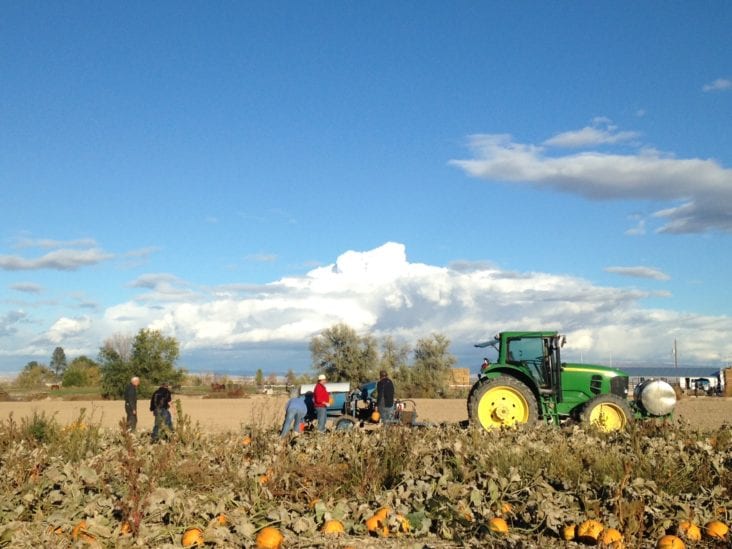 A successful harvest begins with well-planned planting. Pumpkins, like many vegetables, like a loamy soil with a pH of around 6.2. This crop grows best in soils with good water infiltration and good water-holding capacity. Pumpkins will grow in sandier soils if amended with liberal amounts of non-nutritive compost and access to irrigation is available.

“Soil test early and adjust pH to around 6.2 to 6.5. Pumpkins root at the stem nodes, so they are efficient gatherers of nutrients and water,” said J. Powell Smith, Ph.D., an extension associate and horticulture program team leader in Lexington, South Carolina.

The majority of commercial pumpkin growers direct seed the crop, although seeds can be germinated in a greenhouse and the seedlings can be transplanted for a quicker growing time in the soil.

Seeding practices have changed over the past few decades. In the 1980s, growers tended to use twice the amount of seed needed and cultivated out the extra plants that germinated, said John H. Ackerman, of Ackerman Family Farms, LLC in Morton, Illinois.

“Today, we plant true to stand and only use the amount of seed needed to produce the number of plants we need,” he said.

Planting time is as important as seeding rates because pumpkins are sensitive to cold temperatures. The seed does not germinate in cold soils and the seedlings can be easily damaged by frost. The shortest days-to-harvest varieties take 85 days to reach maturity, although most require 90 to 120 days. Geographic location and intended sales outlets for the pumpkins largely determine when to plant.

Penn State Extension notes that in the Northeast, pumpkins may be planted as late as the first few weeks in July. Because pumpkins are a warm-season crop, the seeds don’t germinate until the soil temperature reaches 60 F. Given the northern region’s long winters and sometimes late springs, the ideal time to start a crop may not be until early July.

“In 2014, we planted nine successive plants,” Ackerman said. “We started in mid-May and continued until late June so that we timed the planting right for both long and short season varieties.”

Down South, Powell Smith recommends planting on or shortly after June 15.

“That way the pumpkins will be ready about the 15th of October. It is hard to save the pumpkins through the summer, if you have planted them early in April,” he said.

To some degree, the plant’s large canopy controls weeds in the field. The large, dense, vining leaves starve out weeds. Unfortunately, this isn’t effective in controlling all weeds. The plant is sensitive to most herbicides, leaving few options for control.

Compared with other commercial crops such as corn, wheat and soybeans, the total acreage planted into pumpkins are in the multiple thousands, not millions. That means less funding is available to research and develop herbicides for pumpkins.

“The hoe is our best defense against weeds,” Ackerman said.

That means workers must manually cultivate out weeds, a labor intensive process.

Within the last decade, some researchers have experimented with no-till production systems for pumpkin crops. A 2008 study conducted by Liz Maynard, extension specialist at Purdue University, considered the effectiveness of postemergence weed control options for pumpkins no-till planted into a fall-seeded, spring-killed winter wheat cover crop.

The results of the study found that weeds in no-till pumpkins were controlled reasonably well with a preemergence herbicide (Strategy) followed by a hooded sprayer, row-middle application of a nonselective, nonresidual herbicide (glyphosate).

“Weed control, yield and fruit size with this treatment were comparable to conventional tillage with a preemergence herbicide (Strategy) and one cultivation. Hand weeding could be substituted for the nonselective herbicide with similar results. Other treatments for weed control in no-till pumpkins did not work as well,” the study noted.

Although the study found some success, it was noted that additional weed control measures are still required to prevent weed seed production and shed, and that future studies were needed.

“We’ve experimented with cover crops and no-till practices and this year we had a failed weed control attempt with these strategies,” Ackerman said. “Hoeing is still the most effective method of control on our farm.”

Read more about weeds in pumpkins on page 24.

Pumpkins do not flourish in wet, humid environments where diseases thrive on moist conditions. The first step in preventing diseases is carefully selecting planting sites. Powell Smith encourages growers to plant the crop in a location that will allow the leaves to dry quickly in the morning to prevent diseases from taking hold.

“Here in Charleston, South Carolina, it is very hot and humid. These diseases love our humidity. Because of our increased humidity it is very hard to grow organic produce here. This is why you see organic produce grown in less humid and mild areas of the United States,” said Zack Snipes, Clemson Cooperative Extension Service.

Giving pumpkins air and room to soak up the sun is one way to limit diseases such as gummy stem blight, downy mildew and powdery mildew. Powdery mildew causes a white, powdery mold on leaf surfaces. The mold can kill the leaves and interfere with ripening.

“Downy mildew can end a pumpkin patch quickly. The fruit can suffer from a disease called black rot. Fungicides are usually necessary to consistently grow pumpkins in our environment. Aphid-borne virus disease can cause severely distorted and discolored pumpkins,” Powell Smith said.

“In 2015, we had a wet June,” he said. “We were fortunate not to lose our crop, but I know some processing pumpkin growers lost 90 percent of the crop because of drown-out and disease.”

Crop rotation, good soil and air drainage, and use of resistant varieties (where possible) can help reduce problems from these diseases in the field.

Growers can manage pests using integrated pest management (IPM). In an IPM system, a grower will use a combination of cultural, biological and chemical measures to ensure the health of a crop.

“The first option growers resort to is cultural practices such as using plastic mulch, drip irrigation, proper fertilization and crop rotation to lessen the chances of both insects and diseases,” Snipes said.

Growers also choose plants that have resistance to certain diseases. Some varieties are more tolerant of diseases than others. Used correctly and prudently, pesticides can be used to control insects.

Read more about insects in pumpkins on page 26.

Processing pumpkins are harvested mechanically to speed the process along. But, that’s not the case with ornamental and retail pumpkins.

“We hand pick each of our pumpkins that will be sold at the roadside stand,” Ackerman said. “In the early 2000s, there was a fall where an early frost was coming so we pulled our kids out of school to help us get the entire crop picked. They still haven’t let us forget that.”

Mechanized harvesting mars the pumpkin shells, detracting from the ideal look consumers want when using ornamental pumpkins for decorating or carving for jack-o’-lanterns.

Unless the pumpkins are exported to other regions, the majority of growers sell ornamental pumpkins through roadside stands and farmers markets. Marketing efforts often include strategies that bring customers to the farm. For example, at Ackerman Family Farms, LLC, a corn maze and weekend hay rides are available, offering additional activities for visiting families.

“We bring about 2,000 schoolchildren out of the farm each fall, and we are open to the public on weekends,” Ackerman said.

In today’s marketplace, social media and a willingness to work with the local media are key in engaging the public. “We’ve had local television reporters come out when they are putting together coverage of the fall activities,” Ackerman said. “I don’t use Facebook myself, but my wife and others at the farm do.”

Most importantly, find a marketing strategy that works for your farm and your area. It may be a roadside market, a farmers market or social media. Don’t be afraid to try different strategies or a combination of several to make the most of the short selling window.