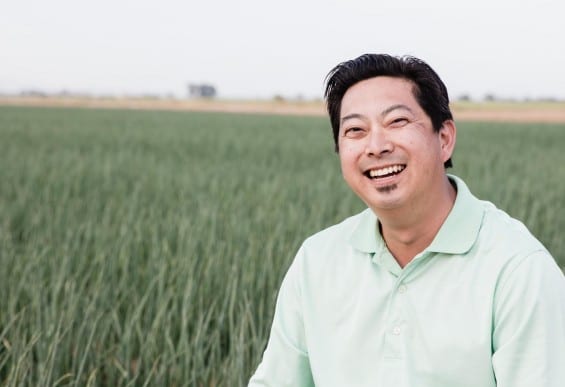 Muranaka Farm was founded in 1947 by Minoru Muranaka and his wife, Matsue. They had a trucking fleet that hauled vegetable produce daily from the Japanese-American farms in the Culver City/West Los Angeles area to the downtown Los Angeles market. – Muranaka Farms Grows Kale

Long before kale was trendy, Muranaka Farm, Inc. saw an opportunity. Many of the farm’s loyal retail supermarket clients were using the vegetable to decorate their refrigerated seafood displays because of its distinct appearance. It was the late 1970s and the rippled and curly dark blue green leaves were largely used as garnishes rather than eaten. 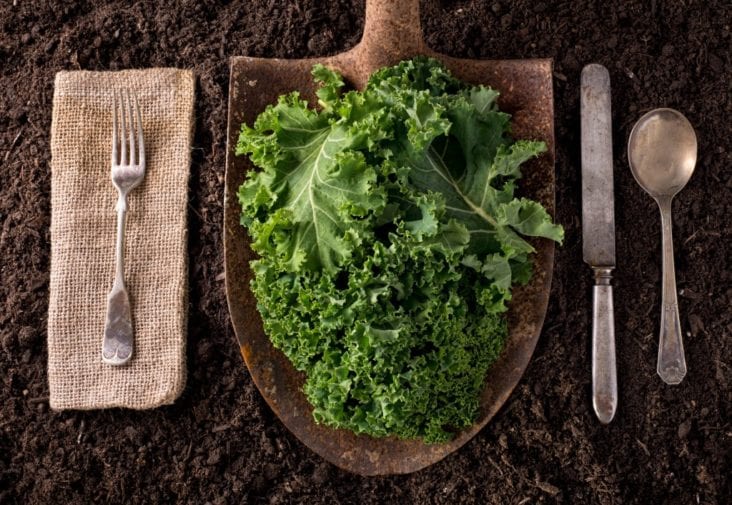 “I was just a kid when my father and uncle began growing the crop,” said Charles Muranaka, executive vice president of Muranaka Farm.

“I didn’t think it tasted good then and it still doesn’t today, but the nutritional content and ‘good for you’ health benefits are definitely off the charts. Consumers are driven to make it taste good to partake in the health benefits,” he said.

Thanks to the publicity about the nutritional value and the popularity among cooking show hosts, growers like Muranaka Farm have enjoyed an opportunity to diversify production and add a relatively low maintenance crop to their offering.

Most farmers can grow kale. It’s a relatively hardy crop that thrives in nearly every climate. Although it may be a relatively easy crop to grow, it takes attention to detail and a reliable harvest to sell well. “To compete in the green kale market, consistent quality and supply is key,” he said.

Even though Muranaka Farm has been growing the recently fashionable food for more than four decades, the increasing acceptance of the crop has encouraged them to increase production and dedicate more precious ground resources to growing kale.

Located in Moorpark, California, Muranaka Farm is a well-regarded family-owned and -operated grower and shipper of bunched green onions and radishes. The farm is ranked among the largest growers of specialty bunching crops including leek, curly and flat parsley, cilantro and assorted colored beets and kale.

Although the ground allocated to the kale crop is moderate in size, it accounts for a significant percentage of the farm’s overall production. “We try to extract maximum performance out of each and every kale plant,” he said. “As result, we can harvest the same plants on multiple harvest cycles enabling us to take a relatively expensive growing cost and spread is across more yield to make it cost effective and profitable to grow.”

Muranaka Farm was founded in 1947 by Minoru Muranaka and his wife, Matsue. They had a trucking fleet that hauled vegetable produce daily from the Japanese-American farms in the Culver City/West Los Angeles area to the downtown Los Angeles market. Through this business, they were introduced to the farming industry and were given the opportunity to start farming as celery sharecroppers.

Their first farming attempts were unsuccessful. However, Minoru and Matsue were determined to find the right crops to grow and become successful farmers. 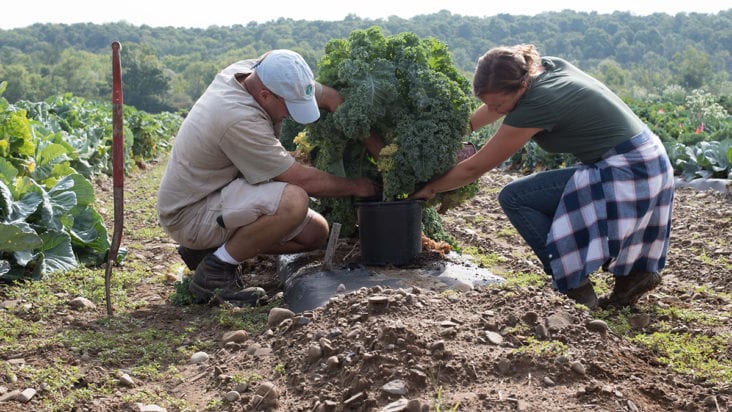 “They had to make a tough decision to either stay sharecroppers their whole life or make a go of their own. They chose to go independent,” he said.

In the 1950s, the couple succeeded and became independent growers starting with a small 60-acre farm in the San Fernando Valley where they began farming green onions and radishes. Both crops continued to be signature crops for them as they moved west from the San Fernando Valley into the town of Moorpark. “They moved to Moorpark in 1969; it remains the home base for Muranaka Farm, Inc.,” he said.

Minoru and Matsue’s sons, Harry and Roy, continued to expand the farming business and in 1983, they made the decision to begin operations in Mexico. With the reputation of providing high quality produce consistently with year-round availability, diversifying the growing regions was necessary. Because of the warm steady weather throughout the winter season in the Mexicali Valley, “Mexicali provides a strong growing platform to ensure consistent quality crop to our customers,” Muranaka said.

In the decades that followed, the younger generations worked at the farm and over time became an integral part of the business.

In 2002, Charles, Minoru and Matsue’s grandson, began his career at Muranaka Farm. He was an aspiring film editor after graduating from University of California-Los Angeles. Ironically, Charles does not have a degree in film, but rather a bachelor of arts in economics as he was struggling to find a break into Hollywood.

Coincidentally, Charles’ cousin who operated the business at the time, called asking if he was interested in the purchasing manager position that opened up. “I was responsible for purchasing all the harvest and post-harvest packaging materials and supplies. I bought a ton of cartons and rubber bands,” he said.

The farm has always been part of Charles’ life. “I used to spend summers out at the ranch. My father wanted both my sister and I [to] build a strong appreciation for the farm. Our farm provided not only for our family but also [for] the families of our workers. It wasn’t something to be taken lightly and deserved the utmost care and respect,” he said.

Charles has been in the business for almost 15 years now and is proud to represent the long family tradition and said, “I absolutely love what I do. Every day has new challenges. Managing living breathing plants and Mother Nature is exciting,” he said. “To be able to feed the country with the freshest quality produce we can grow is a privilege.”

He looks forward to continuing the legacy and eventually passing along the business to the next generation.

“My boys are eight and six. We’ve got a long way to go and the business model will continue to evolve and grow just as our plants do,” he said. “It would be a sight to see our Japanese-American business survive to the fourth generation.”

He acknowledged it’s difficult to keep the business model fresh and relevant in today’s fast-paced world and he commends all the multigenerational family farms that continue to push forward through this challenging landscape.

Kale grows nearly everywhere in the United States, with California ranked as one of the top five producing states in the country. In some regions, kale can be direct seeded into the field during certain seasons, but at Muranaka Farm, it is transplanted as seedlings year-round.

Each crop is started in a greenhouse and takes about 45 to 60 days from seeding to the time it can be transplanted in the field. The entire process is fairly labor intensive from transplant to harvest.

After the first cutting, it takes another 30 to 45 days for the next set of leaves to mature for round two of harvesting. And the time frame stretches out as the weather turns colder.

“We don’t want the leaves to grow too long or too large so we pay pretty close attention to when the plants are ready for harvest,” he said.

Depending on the season and the weather, it’s possible to harvest four rounds or more of kale off the same planting. Growers that specialize in processing kale harvest the crop as a much younger and tender size mechanically.

However, growers like Muranaka Farm that focus on selling kale to supermarkets rely on a large labor force to hand pick and bunch the kale. The hand harvest maintains the integrity of the plant for the subsequent harvests and enables us to supply a competitively priced consistent quality product to exceed the customer’s expectations.

“We’re not using a lot of mechanization right now. As the labor costs continue to rise and fewer people are available to harvest, hand-harvest crops will continue to become more expensive to produce,” he said.

Muranaka knows that to continue the farm into the future, mechanization will likely become a part of daily operations. “We are taking a hard look at mechanization. My father and uncle have always encouraged me to think long term and how to be more effective and efficient in our operations,” he said.

Despite being a relatively easy crop to grow, kale is susceptible to insects that choose crucifers crops such as cabbage, broccoli, cauliflower, Brussels sprouts, etc. In California, the Bagrada hilaris (Burmeister) bug, also known as the painted bug, is a significant concern.

The Bagrada hilaris is native to Africa and was first spotted in Los Angeles county in California in 2008. It has since spread to Arizona and as far east as Florida.

The bug pierces the leaves to feed, causing physical damage to the plant itself. The entomology department at the University of Florida stated, “Young seedlings are the most susceptible to feeding damage and should be protected by insecticides if a field has a history of bagrada bugs.”

“It’s all hands on deck with this pest,” Muranaka said. “[It’s] very challenging to keep this bug out of the crop once it shows up. At least you can take some preventative measures, [but it’s] much more challenging for our organically grown fields.

Muranaka Farms has nurtured its reputation as a high-quality, consistent grower/shipper and has enjoyed continued success through its well-established foundation of core customers. Growth comes largely by word of mouth and their long-standing, proven track record. “We have a website and we get good hits through a Google search, but we don’t do much in advertising. Customers that are looking for our crops always seem to find us,” he said.

Although Muranaka Farm has operated for 70 years now, Muranaka knows it’s critically important to continue evolving and finding efficient ways to grow and sell vegetables. For example, though planned irrigation cycles with sprinklers are used to water the crop, he is investigating best practices for the future. That includes the implementation of drip tape irrigation methods to conserve water and improve effectiveness and efficiency in resources used.

“When we use drip tape we can deliver the nutrients directly to the root structure of plant where it needs it the most. Watering and fertilizing furrows where it’s not needed is expensive,” he said. “It will also offer better weed control.”

Although many farms include expansion in future planning, Muranaka said that is not the only focus; instead, the growing operation is concentrating on improving and maintaining efficiencies. Every seed counts – getting each seed to grow to harvest as a quality plant that is eaten by consumers. “This is a methodology that my father and uncle have impressed upon me,” he said.

Above all, Muranaka believes in building good teams with good people.

“I’m only as good as the teams we can build. Everyone at the farm has a role and responsibility to act upon. I am here to make sure we are all marching together to the target goals,” he said. “This business will always be about great team-building and the hard work and dedication of people to be the best they can be.”