Save the date: National Kale Day is scheduled for Oct. 4, 2017. Yes, there’s a national day to celebrate kale. In 2012, National Kale Day introduced an annual day to celebrate the nutritional benefits of kale. Many longstanding favorite vegetables already have similar days so with kale’s recent popularity, it made sense that this veggie, too, could be celebrated. – How to Take Kale From Seed to Harvest

“Kale ranks in the top 25 for crop production in the United States,” said Timothy Coolong, an associate professor at the University of Georgia Extension. “It’s been popular in recent years, but the sheer acreage produced pales in comparison to other crops like broccoli.”

Kale is a versatile vegetable that can be eaten cooked or raw and with the recent publicity about its health benefits, the crop is enjoying a new interest among growers. Once relegated to a garnish on a plate, the vegetable is now a key ingredient in smoothies and soups and is baked to make kale chips, a healthy alternative to chips or fries. 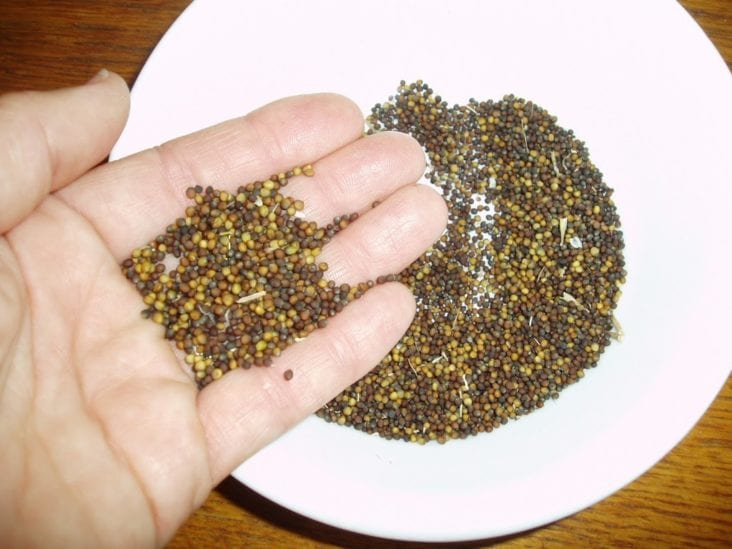 “According to ‘The Packer Marketing Guide,’ kale contains vitamin C, which helps to fight cancer,” said Wesley Kline, Ph.D., an associate professor for the Cooperative Extension of Cumberland County Rutgers New Jersey Agricultural Experiment Station. “Kale is high in vitamin A, which contributes to healthy hair and skin. It also has more iron per calorie than beef and contains omega-3 fatty acids,” he added.

Consumer preference is one reason growers are adding this crop to their production schedule. Another is that it makes a good fit for producers raising similar crops.

“Large-scale farms who are already growing collard greens already have the ice packing equipment in place that can be used to handle kale,” said Coolong. “For small-scale growers kale can make a good early season crop.”

Kale is considered a relatively easy crop to grow in most regions. “It grows on a wide variety of soils,” Kline said. Nationwide California, Georgia, New Jersey, Texas and North Carolina are the top five kale producing states – a testament to the crop’s ability to thrive in diverse conditions.

Moderate temperatures that range from the high 60s to mid-70s during daytime hours and drop to around 55 overnight provide the ideal conditions. In warmer climates the crop is well suited for spring and fall harvests. “In the South the crop has two growing seasons. The first [is] in the fall and the second is when crops are planted in January and harvested in March or April,” Coolong said.

Kale also fares well in northern summer climates. “It will grow even in southern New Jersey through the summer. It can overwinter there, too, for a spring harvest,” he said.

With the combination of strong consumer demand and the plant’s hardiness, kale can be a good fit for small- and large-scale growers. Coolong and Kline offer advice on best practices for planting and harvesting as well as insight into pest and disease pressures.

Kale doesn’t require an inordinate amount of specialized field preparation. As with any crop, soil fertility is the starting point for profitable yield. “Start with a soil test,” Kline said.

Similar to other greens crops, kale thrives in a soil pH between 6.5 and 6.8. Once soil amendments are added based on the results of a soil test, Coolong said that pre-emergent herbicides are important for establishing a strong kale crop.

“Kale was a niche crop for a while so there wasn’t much labeled for use in the crop, but there are some good ones available,” he said.

Trifluralin is one herbicide that many growers incorporate pre-planting and then reuse after the crop is established. “Once the plant starts growing, it has the ability to shade out weeds quite rapidly. But it does take a while for kale to get established so early season control is important,” he added.

Plastic mulch is another alternative for weed control within the crop rows. “Conventional and organic growers choose to plant kale on plastic mulch,” Kline said.

Coolong adds that in Georgia, growers who plant kale on plastic mulch are scheduling kale as the last crop on the plastic. “The kale is planted on plastic that was used for a previous crop when the mulch is more or less close to being finished,” he said.

Planting on plastic mulch only prevents weeds from growing around the plants. Kline added that an herbicide or cultivation is still needed to control weeds between the rows.

Once the ground is prepared, growers can direct seed or transplant kale seedlings in the field. In New Jersey, the spring crop is typically planted between April 1 and April 20 and the fall crop from mid-July to late August. When planted on bare ground Coolong observed that southern growers plant on 3-foot centers with 6 to 8 inches of spacing in the row. Then, a pivot irrigation system provides needed water. When planted on plastic, he sees growers planting double rows.

Proper in-row and between-row spacing also depends on the variety and consumer. “Spacing depends on the market and if plants will be cut off or a multiple hand harvest system by stripping leaves is utilized,” Kline said.

Kline said that to support a good crop, the field should be fertilized prior to planting followed by side dressing after each cutting or stripping leaves.

“Some varieties are heat tolerant and can be harvested through the summer in cooler areas,” Kline said.

It’s key to choose a variety well suited to your geographic location and market base. Consider how quickly the plant will regrow and the total number of clippings that can be taken from the plant. “For example, varieties that produce leaves spaced farther apart will have lower yields,” Coolong said. “Most people still use winterbor, but we’ve also seen darkibor do well.”

When choosing seed, it’s important to opt for a variety that is disease resistant, especially against black rot disease. The increased consumer demand has affected the availability of some varieties. “The crop’s popularity has created a shortage of some seed,” Coolong said.

Kale, while hardy, is susceptible to pests. “Fields should be scouted for diseases and insects then based on the scouting, determine if a control measure is necessary,” Kline said.

Pest pressures can vary geographically. In California, the Bagrada hilaris (Burmeister) bug, also known as the painted bug, is a significant concern. This insect is native to Africa and was first spotted in Los Angeles County in California in 2008. It has since spread to Arizona and as far east as Florida. The bug pierces the leaves to feed causing physical damage to the plant. The entomology department at the University of Florida reported, “Young seedlings are most susceptible to feeding damage and should be protected by insecticides if a field has a history of bargada bugs.” 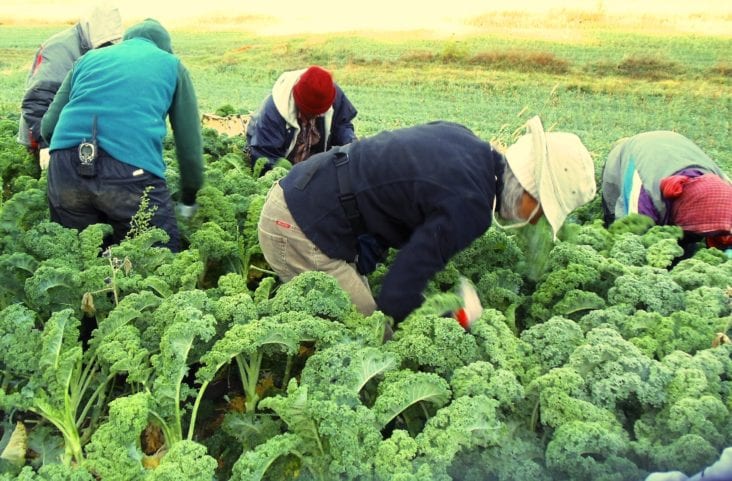 In Georgia, growers are concerned with higher populations of diamondback moths and this pest’s insecticide resistance.

“Farmers that grow greens year-round are seeing resistance so it’s critical to plan a broad rotation of insecticides for control,” Coolong said.

For the most part, growers that raise other crucifers crops such as cabbage, broccoli, cauliflower, Brussel sprouts, etc., should anticipate the same insect families to also attack kale.

Sprays can be timed based on yellow rocket first bloom. Many insecticides control the various insects. “Thresholds have been developed for the worms to better time applications,” he said.

Crop rotation is critical in soil health and managing pest infestations, particularly for cabbage maggot control. Another option is insect netting. “The netting can exclude flea beetles and worms, but the netting must be put over the plants prior to insect activity or the insects will be trapped causing more damage,” Kline said.

Kale crops are typically harvested in two ways. For fresh market sales, the crop is hand harvested. It may be necessary to trim and remove any yellowed, brown or damaged leaves. The ideal time to harvest kale is when the leaves feel tender and have not yet developed tough stems.

Although hand-harvest is labor intensive, the process leaves the plants in the field and allows for multiple clippings from the same crop. “The loose leaves may be put in a box or bunched directly in the field,” Coolong said.

Field sanitation is key to reduce spread of disease. “Cutting tools are a primary source of disease carryover. Knives should be routinely sanitized to keep disease inoculum from building and spreading,” he said.

At a minimum, the workers’ knives should be sanitized at the end of each harvest day. But for better protection, Coolong recommended placing buckets of sanitizer at the end of selected rows for regular sanitation intervals throughout the day. A solution of 1 ounce household bleach per gallon of water creates an economical and effective sanitizer.

Baby kale used in salad mixes and kale that is grown for processing may be mechanically harvested. “If harvesting whole plants, the plants are generally younger, which will allow another crop to be planted. The decision of how kale is harvested depends on the market,” Kline said.

Once gathered, kale is usually stored fairly cold around 34 degrees Fahrenheit according to Coolong.

Although kale is a crop that has enjoyed a surge of popularity as a “superfood,” it’s a vegetable that has been around for a long time. It’s even been cited in history. According to the Idaho State Department of Education’s Healthy Meals Fact Sheet about kale, in Scotland the phrase “come to kale” was an invitation to dinner.

Kale can be a viable addition to a commercial grower’s production and is especially well suited for growers already producing cabbage, cauliflower, broccoli, etc. The crop can extend a season in the early spring and late fall. Kale’s increase in popularity and its relative hardiness make this a good option for growers considering diversifying crops grown.