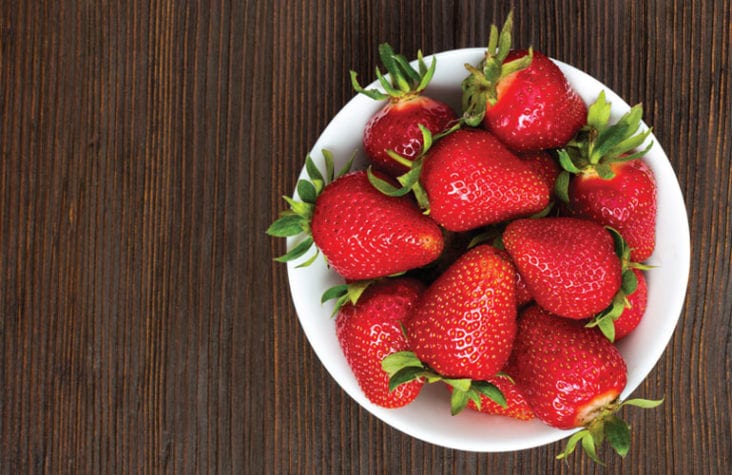 Without strawberries, life would be sad: No strawberry shortcake, no strawberry parfaits, no strawberry ice cream. Sorrow has been averted, however, with producers growing 3 billion pounds of strawberries in 2014. The total value of the crop was $2.9 billion, according to Agricultural Resource Marketing Center (AGMRC). No doubt: strawberries are a prized crop in the United States. How to Have a Successful Strawberry-Growing Season

To get a slice of this $2.9 billion strawberry pie, look for ground with the right soil in an area with conducive weather. Assemble a game plan on how to fend off disease, and your slice of the pie could be big.

Key to a successful season is to have great soil that is prepared correctly. Most large strawberry farms begin prepping the soil in mid to late August. Soil needs to be fertilized and plowed. Often, a fertilizer with high nitrogen content is required as strawberries need a lot of nitrogen to produce well, according to StrawberryPlants.org. 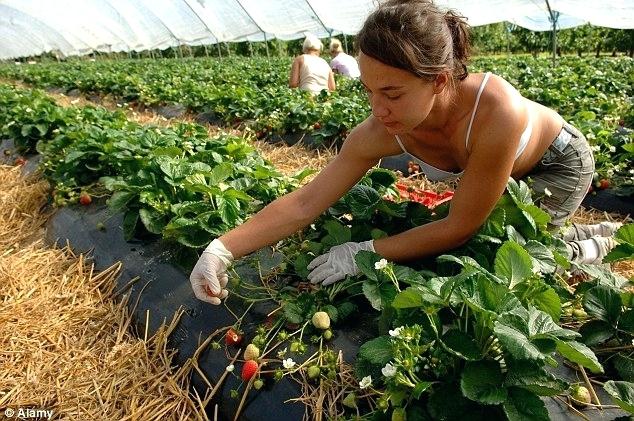 The next step is to plow the field. “After fertilization and plowing, the soil is mounded into plateau rows and covered with black plastic. Usually, when the plastic is laid, drip tape irrigation is simultaneously placed in the ground. These tasks are accomplished with a specialized tractor-machine. The drip tape will be used to water and fertilize the strawberry plants as they grow and produce,” according to the StrawberryPlants.org website.

Actual planting will not take place until early the following spring to ensure that the farmer has time to get rid of pests and weeds that would severely harm the yield at the end of the season. Most weeds will need to be picked by hand, but when it comes to insect pests and disease, there are many options to control and exterminate them.

Powdery mildew is a big problem for strawberry farms that are growing in an environment that receive a substantial amount of rain throughout the season. According to the University of Florida, “Fields with susceptible cultivars should be surveyed regularly for powdery mildew, especially early in the season.”

If mildew is found on the crop, fungicides need to be applied to stop the fungi from spreading and taking over your crop. Fungicides that can be used to control the spread of mildew are Rally 40WSP or Nova 40W, according to the University of Florida. Both of these should not be applied at a rate exceeding 5 ounces/acre or 30 ounces/season.

If one of those two fungicides is chosen to fight mildew, rotational crops need to be planted at least 30 days after the last application.

Powdery mildew is not the only pest or disease trying to ruin the strawberries. Angular leaf spot (ALS) is another big issue for winter strawberries. According to the University of Florida, “The first symptoms of ALS begin as small, water-soaked lesions on the undersurface of the leaves. When moisture is high on the leaves, these lesions ooze sticky droplets of bacteria. As the disease develops, the lesions enlarge to form reddish-brown spots that later become necrotic.”

A practical way to recognize the disease is to place the leaves against a source of background light where the spots appear translucent. The tissue with older lesions eventually dies and dries up giving leaves a ragged appearance.

A good strategy to control and exterminate this disease is to use pathogen-free transplants and to avoid using machinery that has the disease on any of its parts.

Botrytis fruit rot or gray mold is one of the most important diseases to manage according to UF. This mold affects strawberries and fruits worldwide. The best way to get ahead of this disease is to know how to recognize when it is present.

“Botrytis fruit rot occurs in the field and after harvest. Infection occurs in the flowers and recently set fruitlets, but the symptoms are observed commonly on green and ripening fruit. Lesions begin as small, light brown spots that quickly enlarge and become covered with white fungal mycelia. Under moist conditions, gray-to-brown spores cover the lesions and the entire fruit may become mummified. When diseased fruit are disturbed, large numbers of spores are often released and are visible as gray puffs,” according to UF.

Removing infected plants from the growing area can be helpful but will not do much in containing and destroying the disease.

Thiram Granuflo (tetramethylthiuram disulfide) is an effective chemical for destroying Botrytis fruit rot. Florida specialists do warn that strawberries treated with this chemical should not be rotated in with other crops that have not been treated with Thiram.

One of the more dangerous rots may be the Colletotrichum crown rot. This disease is mainly found in subtropical regions of the United States. “Although crown rot is observed in fields during the winter production season, it is most severe in nurseries in the southeastern United States and is one of the primary reasons that production of transplants for the Florida fruit production season has been moved to cooler regions,” according to UF.

Like any other disease or rot, it is critical to know how to recognize that crown rot is present to stop it from spreading. “Plants infected initially show signs of water stress and may collapse relatively rapidly (in merely two to three days) at high temperatures. At cool temperatures, however, it may take weeks before plants collapse,” according to UF.

The internal crowns of infected plants show a reddish-brown and firm rot when cut. Typically there are no lesions on foliage or stolons, and symptoms may be confused with those of Phytophthora crown rot, note Florida specialists. If the symptoms are present, using transplants from northern nurseries and reducing water on foliage by the process of drip irrigation are cultural ways of preventing the spread of the rot.

Thiophanate-methyl is a common chemical that can be used to exterminate crown rot. Application of this chemical will vary based on each individual brand.

One disease that almost all strawberry farms will encounter, since it is the most universal disease of strawberries globally, is leaf spot. Leaf spots, according to Florida, are “initially small, purplish-red and less than 1/8-inch in diameter. The spots may enlarge to 1/4-inch depending on the cultivar. On some, the lesions remain very small and numerous and leaflets appear “rusty.” On others, the lesions increase to 1/4-inch in diameter or larger and develop white or gray centers with reddish-purple to dark purple borders. Lesions may also form on fruit, calyces, petioles and stolons. Severe infection can result in death of leaflets and defoliation of plants.

Leaf spot can be handled by using disease-free transplants. Or, they can be attacked by using any approved chemical with captan as an active ingredient.

Once all diseases and molds have been handled and spring comes around, it is time to plant. According to Strawberry Plants, this is still done by hand, usually about two weeks after the plastic mulch has been laid.

At this time, a tractor is used to mechanically punch holes in the plastic at exact intervals. Workers usually ride or follow behind the tractor and place plugs into the punched holes. Holes for planting are usually spaced between 18 and 24 inches apart.

The rows typically are on 4-foot spacing. Handling runners is important. According to Maine Organic Farmers and Gardeners Association (MOFGA), all runners should be allowed to root, but beds are kept 18 to 24 inches wide by cutting off runners that extend into the alley; use a hand hoe, rolling coulter wheel, cultivator or rotary tiller.

To ensure early runners and vigorous plants, remove all blossoms during the planting year. Failure to do this likely will result in weaker plants with lower yields.

Although most fertilizer was applied before planting, to ensure a good bud set, fertilizers that are rich in nitrogen should be applied during the midsummer months before bearing year, according to MOFGA.

To protect strawberries during the winter, mulching is necessary. MOFGA noted strawberries should be mulched over winter to protect the plants from extreme cold and, more importantly, from damage by rapid freezing and thawing of soil.

Although straw is the most commonly used mulch, any material that will provide protection without matting can be used, including marsh hay, Sudangrass, pine needles or coarse wood shavings.

Take these steps before temperatures drop below 20F. MOFGA recommends placing 4 to 6 inches of mulch or whatever material is being used on top of the rows. About 125 bales of straw will be needed to protect 1 acre of strawberries.

Roughly four to six weeks after blooming, strawberries are ready to be harvested. If harvesting is done by hand, do not pull the strawberry off the stem. Instead, cut the stem to separate the berry and stem.

Berries being picked should be very ripe and red to ensure the best possible quality. If a strawberry is not red and ripe, leave it alone for a few days and revisit the field to pick again.

Once strawberries are harvested, it is time to send them to market. If the producer chooses to freeze the berries and sell them to stores, berries must be free of their calyx and stem. This can be done by hand, but machines can also do this job mechanically and very precisely.

Using the machine to cut the calyx and stem is a cost effective way of prepping the berries and requires less labor costs, according to the California Strawberry Commission. Once harvest has been completed and the season has ended, one question remains.

Is it better to renovate or to rotate? Both have pros and cons and, in the end, the answer depends on what type of grower you are. MOFGA noted that conventional growers renovate fields after harvest. Within a week after harvest they mow the old foliage to 1 inch above the crown and narrow the rows to 10 to 12 inches with a rotovator or tiller.

This practice is questionable for organic growers, because, without herbicides, weeds often compete better and take over when released from the shade of the old strawberry foliage. Organic growers may be better off not mowing and just narrowing the rows and fertilizing at this time.

For organic or conventional farmers with a large acreage of strawberry fields, usually the operation will be more productive when the berries are only picked for one year and then the field is rotated. This method is good for organic farmers, especially, since it is difficult to harvest from the same field more than two years in a row due to the weeds and pests that naturally follow strawberries.

If crop rotation is pursued, MOFGA recommends plowing the land as soon as the crop is harvested. Deciding what to do next depends on which problem appears to be the worst or most threatening.

As in any organic operation, growers must learn the biology of the weeds and pests that have become major problems during strawberry production and practice a crop rotation that interrupts their success best.

If no problem has gotten out of hand, sow green manures that will best improve the soil and reduce the need for off-farm sources of fertilizer.

With more than $2.9 billion in strawberries being sold each year there is room for plenty to get a slice of the pie as long as timing of field prep is correct, pests and diseases are controlled and harvest is completed smoothly.