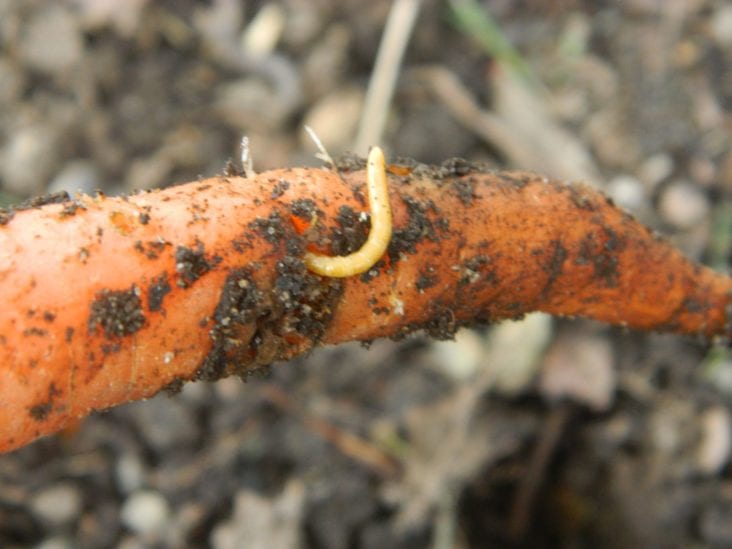 Carrots — we’ve all heard that they’re good for our vision, and simply healthy for us all. And television’s animated Bugs Bunny did an even greater service promoting the familiar orange vegetable to the masses of children who watched him chew on them constantly. Infested Carrots

Whatever your reason for knowing about these usually orangey, rough-looking root vegetables, carrots are here to stay. And growers can continue to raise them successfully if they can reduce insect damage.

In Florida, root damage is a big problem for carrot growers. There is a root cause (pun intended) in the form of soil pests such as cutworms and wireworms that feed on the root and stem, according to a guide on insect management by S.E. Webb at the University of Florida.

Cutworms overwinter as larvae or pupae, according to an Integrated Pest Management (IPM) publication edited by Extension entomologists Kenneth Sorenson and James Baker with North Carolina State University (NCSU). In the spring, cutworms feed on plants. In other instances, moths that overwinter as pupae can lay 55 to several hundred eggs on host plants.

The moth’s wingspan is 38 to 51 mm, according to the NCSU publication. The forewings of black cutworm moths are dark with three black dashes and have a white splotch on each wing. The forewings of variegated cutworm moths are more yellowish or light brown in color. Now, spotted cutworm moths carry brown forewings that look red or purple in color and have a pinkish triangular spot on its anterior margin and a moon-shaped spot close to the wing’s center. The wing span of the spotted cutworm moth is 30 to 40 mm. Lastly, the hind wings of all three moths – black, variegated and spotted – are a pale grayish color or an off-white color with dark veins.

However, adults do not cause the root and stem damage, Gretchen Voyle of Michigan State University said. The larvae are credited with this destruction.

The cutworm caterpillar can stretch to 1 to 2 inches once they are full grown, according to the IPM program at the University of California. They are easily recognizable at that stage.

Black to gray caterpillar larvae can grow up to 46 mm, according to the NCSU IPM center. Spotted cutworms, which have a pale brown to gray body, reach about 38 mm. A pale brown accompanied by a yellow dot on its back, variegated cutworms grow to about 50 mm.

Webb said that cutworms are a concern when growers try to establish their carrot seedlings. Mainly at night, the larvae meet up with seedlings and can cut the stem at the base of the plant.

Voyle said cutworm larvae can feed at the soil line, below the soil and in the plant. If disturbed, cutworms will curl up like a ball as a self-defense mechanism. This also is effective when feeding. She said they curl around the stem, start feeding, then cut it off.

Webb suggests the best way to control cutworms is to work the soil well before planting carrots.

To help control cutworms, growers should keep their crops free of weeds in the winter, according to the IPM program at the University of California. It recommends clipping and disposing of any foliage and other plant debris from the previous crop. Additionally, the IPM program suggests planting more plants to account for any losses to cutworm larvae and growing tough transplants.

According to the NCSU IPM center, the southern potato wireworm overwinters during the larval stage, and they can infest plants during the summer, fall and winter.

Wireworms are cylindrical, mostly yellow in color, and have six short legs, which are near their head, according to the IPM program at the University of California. The larvae damage sprouting seeds and seedlings when they feed on the plant’s roots and shoots. In addition, wireworms can bore into the carrot plant’s stem.

When wireworms attack carrots, Webb said they can cause severe damage, more so because their hole openings pave the way for entry points for pathogens, which can create secondary rots.

Wireworms may appear shiny looking, he said. They have hard, yet slender bodies as larvae of the click beetle. These larvae look brownish-yellow and are 0.5 to 1.5 inches long. Larvae remain in the soil for one to five years, according to Webb.

The adults are large brown beetles, he said, and they like grassy areas in such crops as rye, wheat, oats, mixed pastures and potatoes. The eggs are hatched in two to four weeks, and growers may see different size larvae due to the longer egg-laying period.

According to the Entomology Department at the University of Georgia, the adult click beetle stretches 6 to 10 millimeters and its wings have parallel channels. As a survival technique, the beetle will snap its head and abdomen so they can flip over, which makes a clicking sound.

The Entomology Department at the University of Georgia advised avoiding planting grass cover crops before carrots because wireworms are attracted to them. The university suggested treating the soil with fumigants before planting.

Webb said a good way to gauge if wireworms are in fields before growers plant is to set out about five bait stations around five weeks before planting. The station, which is usually 6 inches deep is filled with untreated wheat and corn to attract wireworms. In about two weeks, growers can dig up the station and check for these insects. He said one wireworm per station justifies a pesticide treatment.

For fields that record a history of wireworm concerns, Webb advised applying soil insecticides at preplant. The best fight against these pests is to choose a field without a history of wireworm presence. He also advised planting when the soil is warm versus when it is cooler to cut down on wireworm injury.