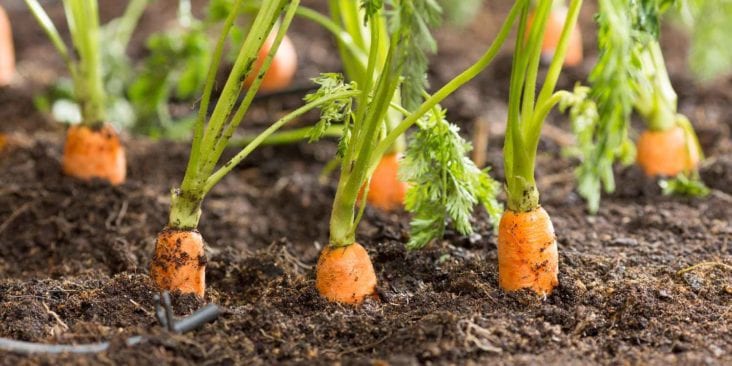 Weeds in a carrot crop can quickly overtake the crop. If not controlled, these weeds can compete with nutrients, light and water, said Greg MacDonald, an Extension weed scientist with the University of Georgia. Not controlling weeds can result in crowding out carrot vines. Weeds in Carrots

Too many weeds impact not only growth but also harvest, making it harder to dig, MacDonald said. They encourage insect and disease presence, which create their own set of problems for growers.

He warned that any plant residue of weeds can lessen the effectiveness of any fumigants that growers apply. This can also encourage nematodes. MacDonald said fumigants alone won’t completely control weeds in carrots in Georgia.

Both summer and winter annual broadleaf weeds and grasses can give growers a fit. MacDonald said some of these are sicklepod, crabgrass, pigweed, carpetweed, lambsquarter, wild radish and evening primrose.

MacDonald suggested that the first step to controlling weeds in carrots is to practice good prevention. First avoid fields with heavy infestations of perennial weeds, such as bermudagrass and nutsedge, because they keep coming back year after year.

Another good way to control weeds is to till the land properly, control any insects and diseases and apply the right fertility program. These steps will help produce a healthy plant, MacDonald said. In addition, the proper plant density will shadow out competing weeds. Growers also can cultivate often to keep weed populations to a minimum.

As a preplant herbicide, growers can use trifluralin to control annual grasses and small-seeded broadleaf weeds, MacDonald said.

One of the harder weeds to control in carrots is nutsedge. MacDonald said linuron and metribuzin offer temporary suppression; however, trifluralin and fluazifop are not helpful.

Weeds are a yield suppressor, according to Richard F. Smith and Joe Nunez with the Integrated Pest Management (IPM) program at the University of California. If plants aren’t healthy enough, then weeds will take over, and the result is yield reduction.

Smith and Nunez advised growers to especially control weeds during the first four weeks of planting carrots. They also recommend establishing a solid weed management program that incorporates good cultural practices and chemical use. Unfortunately, they said it is difficult to control weeds through the end of the carrot growing season, so they recommended using preplant and postemergence herbicides.

Timely monitoring of fields is encouraged. Smith and Nunez said that growers should keep track of any weed species in their fields. This record allows them to look back at what fields include specific weeds, and growers can treat those fields based on that data, or they can avoid certain fields if high numbers of weeds occur.

Two weeks before planting carrots in California, or as close as possible to planting, Smith and Nunez advised growers to preirrigate their fields, then eventually cultivate those fields well to disrupt any weeds that have emerged. This will encourage the germination of weed seedlings. It is important that the soil’s temperature is close to the temperature when seedlings germinate. This practice also ensures better weed control. Additionally, they advised growers to cultivate at a shallow level so they can avoid drudging up dormant weed seed.

Before using any of these products, check with your local Extension agent to see if they are right for your weed problem and if they are still available. Be sure to follow label directions.