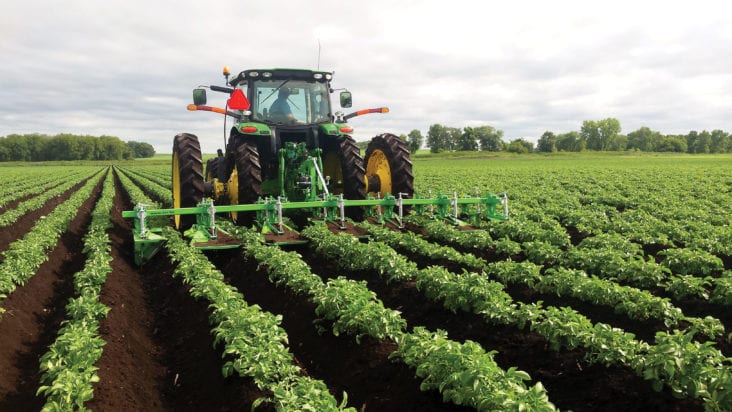 The faint of heart should probably avoid the potato business. That’s the frank advice of Bryan Beck, co-owner with his father, Clarence, of the 3,100-acre Long Acres Potato Farms in Tionesta, Pennsylvania. “It is very cyclical and challenging. The fun part is just when you think you have it figured out, they throw you a curve ball.”  Potato Farms

Read about: Getting a Handle on Frost Protection

The family moved to the Clarion-Venango County area from Somerset County, Pennsylvania, to get off the hills there. Today, although they are high on a plateau, their ground is relatively flat. The altitude brings some bonuses when it comes to disease control.

All production is for the fresh market or processing. Although Pennsylvania is famous for potato chips, they do only table stock – no chippers. 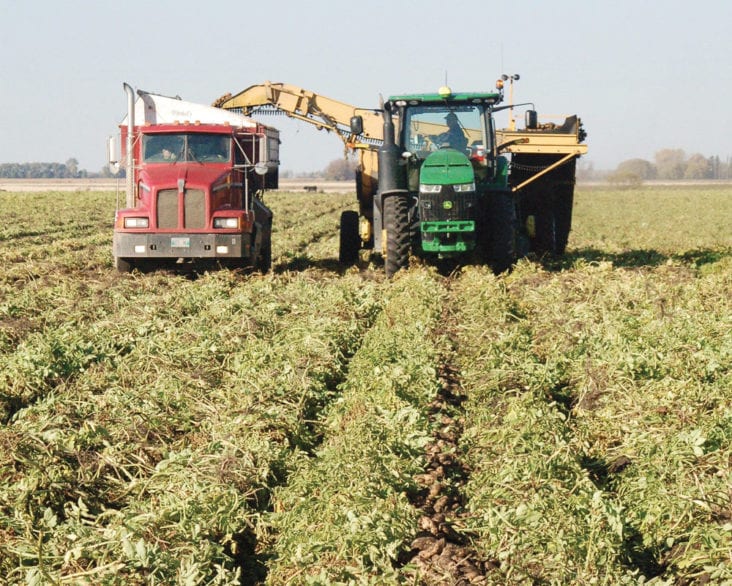 “The potato industry is getting more challenging as the cost of equipment gets higher and higher,” Bryan Beck said. “The reality of today’s market says you have to be diversified…able to use your tractors and tillage equipment on other crops.”

Field equipment is expensive. That is one reason why the older equipment at Long Acres is well maintained. Potato processing equipment is becoming prohibitively expensive unless one is able to dive headlong into the market.

While it was started in the 1970s by the Holstein Associations in the Clarion- Venango-Forest County area, as the number of dairy producers dwindled, Long Acres became a willing participant in Town & Country Day. Bryan Beck said it was successful beyond belief.

The event runs every two or three years, bringing city people to the farm and giving them a chance to see where their food comes from. In 2014, between 3,500 and 4,000 people showed up. In a twist on the usual free milk and ice cream samples, Long Acre provided a teachable moment for kids by getting them to interact with ag industry representatives, buying tractor insurance before driving the kiddie course (hit a hay bale and you’d better have farm insurance!), getting Monopoly money from the banker and interacting with other aspects of farming.

“In 25 years, we’ll have to double the amount of food we produce — and do it with less land,” Bryan Beck said. While he is aware that few of those who visit will ever run a farm, he hopes the demonstration gives everyone an idea of all the job opportunities available in agriculture.

“The key is growing and marketing and putting out a good product,” Clarence Beck said.

Bryan Beck agreed, adding, “Margins are slim. We have to get better and make better yields.”

One key to success is diversification, including being careful to choose the right varieties for planting. Bryan Beck said the days of the round, white potato are numbered.

The hardest part is getting started in potatoes and making the initial equipment investment. Clarence Beck said he sees only two ways to get started in farming or potatoes: Marry a farm girl or partner with an older couple that is retiring.

“Today’s model is not a viable option moving into the future due to capital requirements and marketing challenges,” he said. While he is quite adamant that there are great opportunities in the potato industry, he also is certain that those opportunities will require a change in thinking from the ways things are done today.

“Idaho and other Western producers can grow crops cheaper and with higher yields than we can in the Northeast and New England,” he said. Yet there are great opportunities for the producer willing to look at specialty potatoes, organic production, and the yellows, reds and fingerling varieties that are driving consumer preference today, he said. Small-scale producers have the chance to serve niche markets that may slip past large operations.

One sea change has been the move among consumers away from cooking in the kitchen. People simply do not want to prepare foods anymore.

Bryan Beck said folks are missing out on a whole range of tastes and flavors by buying prepared foods. Both Becks are major promoters of their product.

The soils in Northwestern Pennsylvania are clay-like and quite different than the soils in other Eastern potato areas. And that is part of the reason Long Acres is successful, according to the Becks.

Bryan Beck noted, “Round whites grown on mineral soils taste different. They taste good. They are better than those potatoes grown in sand and irrigated.”

“We might not have the russets – but I think russets are dry. Eastern potatoes have better moisture,” Clarence Beck said.

Of one thing he is certain: all across the country, from Maine through Pennsylvania, Iowa and Washington, potatoes grown north of I-80 are good quality.

The basis of a good crop is good variety selection. The predominant variety is Eva, a smooth, round white potato that has proven itself at Long Acres time and again. They also plant Lehigh.

If they are looking for a short-season potato, they will look to Envol.

“This year (2016) we will be growing about 70 percent red potatoes. Most will go to Keystone Potato Products for slicing and dicing for potato salad,” Bryan Beck said.

Red Maria is the red of choice, followed by Dark Red Norland.

Potato fields are rotated, with potatoes going in once every four to five years. Today, while they farm about 3,100 acres total, the majority is in grain with 200 acres going in potatoes this year.

The actual agronomic cycle starts with a soil test by Brookside Labs, where they have gone since the farm began, and a check on limestone requirements to balance the soil. Then they open the soil with a Kverneland CLC tillage unit, imported from Europe. “We do no moldboard plowing at all,” Bryan Beck said. In fact, he likes the CLC so much that he signed on as a dealer.

All fertilizer is liquid. Urea is applied and worked into the ground at planting time along with heavy doses of P and K at planting.

At planting, a Kverneland planter works the ground into small hills, which are completely formed with the first cultivation in mid- to late-June. There is a single cultivation. At the same time as cultivation, they hill and apply ammonium sulfate.

While the nitrogen is spoon-fed, there is a reason the Becks go with ammonium sulfate – the sulfur acts as a protectant for the crop against blights and disease.

While their elevation helps with disease control, it is no slam-dunk.

“We are always vigilant for blight,” Bryan said. However, while not an organic producer, he prefers to avoid chemical applications as much as possible. “We try to be pro-active,” he said.

For that reason, Long Acres invests in twice-weekly crop scouting. Consultants Dave Slagel, of Petrolia, Pennsylvania, who is a CCA agronomist retired from the Pennsylvania Potato Cooperative and Syngenta, and Jerry Smithmyer of Crop Production Services in Tyrone, are in the fields. “They’ve been great,” he said. “We have two sets of eyes on the crop every four days. It might be a bit of overkill, but it’s cheaper to spot a problem in advance and cut chemical usage.”

They do spray fungicides. Every other application is accompanied by a shot of copper in the mix to help maintain plant health.

Like all potato producers, Bryan Beck likes to see a clean, green field. “Plant health is everything,” he said. But, he added, “I don’t like to grow big tops. While I do like green tops, I’m in the business of producing tubers.”

And produce they do.

A typical acre will produce about 360 cwt of potatoes in late September. Since they no longer have access to their traditional market – which had them bagging and shipping 10-pound bags to grocery chains – turning those potatoes into cash calls for some creative marketing.

“We used to ship trailer load after trailer load of those 10-pound bags to a grocery chain,” he said. Shipments went to Pennsylvania stores, into Ohio and beyond.

“Any more, chains are not selling as big packages of potatoes,” he said.

Today, reflecting consumer demand, those buyers want mixed loads of 5- and 10-pound bags, sweet potatoes, individually wrapped bakers, and a sprinkling of specialty potatoes like fingerlings on the truckload. “There can be as many as 10 SKUs (stock keeping units or product identifiers) in each load,” Bryan Beck said.

For Long Acres, the question of marketing became one of “get big or get help.” Faced with a huge capital investment in equipment, they needed to obtain certifications, survive audits and meet a slew of regulatory requirements, so they chose the latter route. “It’s tough to be a 120-acre grower today,” Bryan Beck added.

“I’d have to make a multimillion dollar investment to go to a more modern system,” Bryan Beck said. Grocers insist on EDI (electronic data interchange) systems and barcoded shipments. Instead he looked for a partner. Today, Long Acres works with Sterman Masser Potato Farms near Hegins, Pennsylvania, to market its potatoes.

Although he supports the Farm Show potato booth (see sidebar), Clarence Beck is not a big proponent of fries or chips. “People want to eat healthy,” he said. “A good baked or mashed potato is what your kids should be eating.” He likes the idea of their potatoes being sold in the fresh, prepared section of grocery stores, thanks to their relationship with Massers.

“For a person like us, we needed to partner with someone who could manage to meet the needs of a large chain. We fill in specific needs for them,” Bryan Beck said.

Baked potatoes were the very first true farm product sold to the public at the Pennsylvania Farm Show. Still a tradition at the 2016 show, those first bakers cost a nickel each at the 1923 Farm Show. Fortunately, potato prices have gone up since then.

Clarence Beck is part of a long tradition of Pennsylvania producers exhibiting in the competition and working the Potato Growers stand at the Farm Show. His father won ribbons for his potatoes back in the 1940s, and his daughter, Janeen, was Pennsylvania Potato Queen in 1985.

In a typical year, between 20,000 and 25,000 baked potatoes will warm the bellies of Farm Show guests. In addition, roughly 30,000 servings of French fries glopped with 500 gallons of ketchup will cross the counter.

While Clarence prefers baked to fried potatoes, he knows the value of promotion. It is a rare newspaper or TV station that does not run a feature on people participating in the potato frenzy at the Farm Show. The potato sale is a positive way to bring potatoes to the public’s attention.

And sometimes they go out of state. Clarence enjoys relating the time that son Bryan, now secretary of the Pennsylvania Potato Growers Association, was Mr. Potato Head at the Thanksgiving Day Parade in New York City.

Being several hours away means Long Acres provides more acreage and geographic insurance on production for Sterman Masser, which is in Central Pennsylvania. “We give them some weather-risk diversity,” Bryan Beck said. It is a win-win.

“We always joke that we’re too dumb to quit growing potatoes,” he said. “Growing potatoes will make you a better farmer. You have to be on top of the crop constantly – potatoes are not something you can plant and walk away.

“Farming is a wonderful business to get into and the potato business is a great part of that,” he concluded.