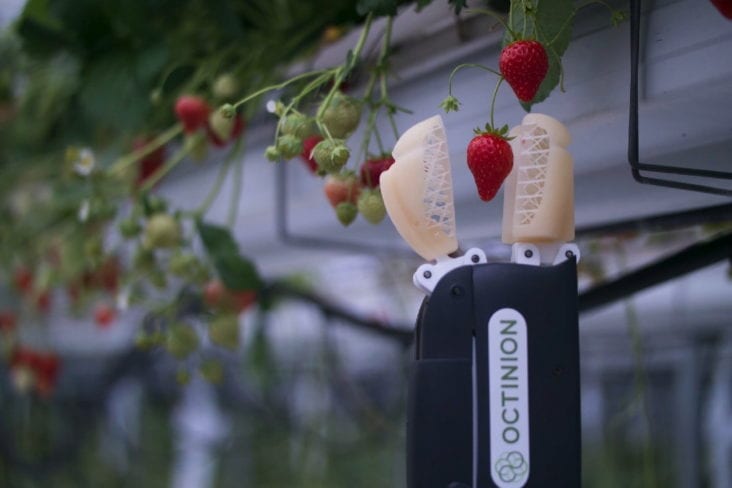 The strawberry-picking season is well under way, but the labor force is in short supply in several countries. Therefore, various robots are in development to help with the picking. Examine the strawberries you buy next, and check if they have the stem attached, or do they only have the calyx?

Whether a berry is plucked or whether the stalk is left attached is a critical difference between concepts that Spanish, Belgian, British and US engineers test on their robots, which may be ready next year.

Strawberry picker robots will harvest the soft fruit mechanically, which is a big challenge. The reason is that each berry has to be located, assessed for ripeness, harvested and boxed with tremendous care in order to avoid bruising.

Some recent developments in branches like visual sensor technology, machine learning and autonomous propulsion have put the goal within the reach of engineers.

“If you can put a man on the moon you can get a machine to pick a strawberry. Today we can say we have a [robotic] arm that is competitive with a human in terms of price and speed,” says Tom Coen, who is the founder of Octinion. This is a Belgium-based start-up company that is conducting its final phase of field tests, in partnership with growers in the UK and Europe.

Their arm is mounted on a self-driving trolley, and can reach up from below. Thanks to 3D vision, it grips a ripe berry between two cushioned plastic paws, turning it by 90 degrees to snap it off the stalk. The current prototype picks a strawberry every four seconds. It can collect between 70 and 100% of ripe fruit, which is competitive with humans. Only the calyx remains, as European consumers are accustomed to berries like this. Stalks may bruise other berries surrounding it.

However, a Cambridge-based start-up called Dogtooth is taking a different route. Founders Duncan Robertson and Ed Herbert tested a picker that leaves them with a centimeter of stem attached. UK retailers prefer it like this, as it extends shelf life. Hey are cautious about how their tech works.

The robot arm mobile platform uses computer vision to identify ripe fruit. Machine learning then chooses picking strategies. The robot then examines the berries to determine their size and quality, placing them directly into punnets.

While Octinion’s machine works only on raised platforms, Dogtooth’s picks traditional British varieties in the field. Mr. Robertson says, “Adopting robotic practice will be a big ask, so I don’t want to ask growers to pull out existing infrastructure to support our robot. We’re trying to reinvent an important part of how soft fruit is grown, not reinvent the whole thing.”

Robots can operate in any time during the day or night. However, developers emphasize that the motivation is not to replace human labor, as it is hard to replicate the standards human pickers bring. The strawberry farmers lack manpower for the picking, so robots are necessary. It is now difficult to employ overseas works in the UK, as the sterling value fell, and UK citizens do not want to do it.

In the US, the fruit is rotting in the fields, as tight immigration rules, raises of minimum wage, and a dwindling birth rate in Mexico mean that there are no willing workers available to harvest.

The producers have to move to robotic picking to survive.

Agrobot, built by the Spanish entrepreneur Juan Bravo, will be available in California next year. In Florida, a former Intel engineer Bob Pitzer leads the Harvest Croo team that is close as well. Agrobot arms grab stalks and snips, carrying the fruit by its stem, minimizing damage.

Both are much bigger than Dogtooth and Octinion robots however, and both are tractor-like vehicles spanning several rows of plants. Arms reach down to search for and pick up fruit.